The Best, Worst and Most Surprising Moments of the 2018 Grammys

The 6oth annual Grammy Awards opened Sunday night with fire, quite literally, as nominee (and eventual winner) Kendrick Lamar opened the show with an an intense performance interspersed with darkly comedic bits from fellow nominee (and eventual Grammy winner) Dave Chappelle. With one of the most diverse and rap-centric groups of nominees ever, the 2018 Grammy winners were anything but predictable, and more than a few times felt too safe. But it was the performances, and presenters’ appeals to causes like Time’s Up and the “Dreamers,” that will be remembered long after the Rihanna GIFs stop circulating.

Here are the most memorable moments — for better and for worse — of the 2018 Grammy Awards.

Kendrick Lamar’s performance of “XXX” off his nominated album DAMN. opened the Grammy Awards with the gut-punching lyric, “America, God bless it if it’s good to you.” With an American flag waving on the ceiling-high screens behind him and an assist from featured artist U2, Lamar delivered a searing critique of American patriotism during his Grammy performance. In one unforgettable moment, the dancers around him fell to the ground, one by one, to the sound of gun shots. Chappelle interrupted the performance to remind the audience that “The only thing more frightening than watching a black man be honest in America is being an honest black man in America.”

This one has to be a tie. Presenting the first Grammy award of the broadcast, John Legend and Tony Bennett — who have won 10 and 19 Grammys, respectively — broke into a few lines of “New York, New York,” originally performed by Liza Minnelli and made famous by Frank Sinatra. But later, Sir Elton John and Lady Miley Cyrus out-bedazzled them (at least rhinestones-wise, and arguably pipes-wise) with a duet of “Tiny Dancer,” a performance that packed an extra punch given John’s recent announcement that he plans to retire after his upcoming tour.

Toward the end of Childish Gambino’s Grammy performance of “Terrified,” singer Donald Glover was joined by a pint-sized performer and the pair began trading impressive runs. The boy — whose voice is reminiscent of a young Michael Jackson’s — is JD McCrary, who appears on Childish Gambino’s nominated album Awaken, My Love! McCrary will play young Simba in Disney’s live-action remake of The Lion King due in 2019. Glover, in a nice “Circle of Life” Grammy moment, will play the lion scion all grown up.

Best (and Only) Endorsement for President

Collecting his second Grammy of the evening, for Rap Album, Lamar paid tribute to the rappers who inspired him on his own musical journey, including Nas, Puff Daddy (a.k.a. P. Diddy a.k.a. Brother Love) and fellow nominee Jay-Z. He ended his speech by pumping his fist in the air with an emphatic, “Jay for President!” Oprah out, Jay in.

On Oct. 1, 2017, a gunman opened fire on the crowd at the Rte. 91 Harvest music festival in Las Vegas, killing 58 and injuring 851. At the Grammys Sunday night, three country artists who performed at that festival, the Brothers Osborne, Maren Morris and Eric Church, performed Eric Clapton’s “Tears in Heaven” in memory of the victims. Also acknowledging the victims of the Manchester, England, attack on an Ariana Grande concert last May, the artists offered up a subdued, somber rendition of the song in one of the night’s quieter moments.

Pain, power, redemption, anger: it was all there in Kesha’s passionate performance of “Praying,” backed by Bebe Rexha, Cindi Lauper, Julia Michaels, Andra Day, Camila Cabello and a chorus of female vocalists all dressed in white. Introducing the performance, Janelle Monáe assured a captive audience, “We come in peace, but we mean business,” calling on men and women to work together to end pay inequality, discrimination, harassment and abuses of power in the music industry. Kesha’s performance followed a 2017 comeback album after a protracted legal battle with her former producer Dr. Luke, whom she accused of sexual assault and battery. It’s hard to think of another performer who could have owned the moment like she did.

It’s too hard to choose just one. First, there was “Despacito,” inarguably the song of 2017, which somehow managed to lose “Song of the Year” to Bruno Mars. Then there was Kendrick Lamar’s loss, also to Mars, in Album of the Year, a category fans were quick to point out he’s now lost three times despite his outsize impact on not just rap but music at large. Finally, there was R&B singer SZA, one of the biggest breakout acts of 2017 and the most nominated female artist Sunday night, with five nods including Best New Artist. She ended up empty-handed, but she did take the stage for a sultry, flawless performance of “Broken Clocks,” and there’s little doubt she’ll be back with an armful of awards before you can say “Drew Barrymore.”

The show couldn’t end without some shots at President Trump, and instead of coming up with original material, the Grammys left the work to Michael Wolff and his recently released White House exposé Fire and Fury. In a short video clip, several celebrities pretended to audition for the spoken-word version of the book. First came John Legend, followed by Cher, Snoop Dogg, Cardi B and DJ Khaled, followed by…Hillary Clinton? Perhaps the last person expected on music’s biggest night — and in a Cardi B collaboration, no less — Clinton appeared very much to relish the opportunity to throw some shade toward 45. 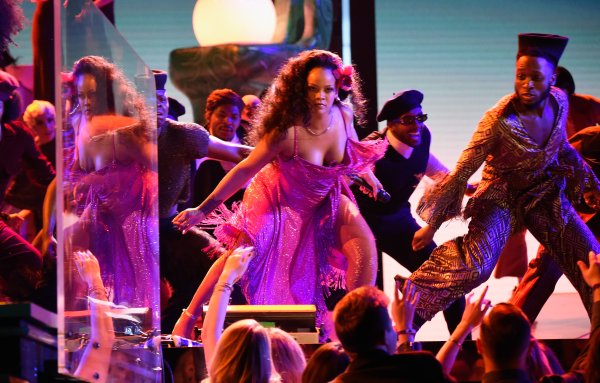 Rihanna's Dance Moves at the Grammys Are the Latest Internet Sensation
Next Up: Editor's Pick