Natalie Portman‘s upcoming action thriller is called Annihilation. But when she was chosen to present the award for Best Director at Sunday night’s Golden Globes, it was the audience that was annihilated with her swift, subtle and wholly uncompromising introduction. Paired with famed director Ron Howard, the Jackie actress stepped up to the podium to share the nominated directors for films like The Shape of Water, The Post and Dunkirk.

“We are honored … to be here to present the award for best director,” Howard began. “And here are the all-male nominees,” Portman followed up.

Her point was well taken: in an evening defined by the aftermath of the #MeToo movement in Hollywood, including the launch of the Time’s Up initiative and driven home by Oprah’s powerful speech, Portman was not on stage to play. Instead, she pointed out a discordant note in the proceedings, especially given that female directors like Greta Gerwig had films up for major prizes. (Gerwig’s Lady Bird, in fact, took home the evening’s top prize — a rarity without a directorial nomination as well.)

And as presenter Barbra Streisand further noted in her opening, Babs herself was the last lady to win for Best Director at the Globes — all the way back in 1984, for Yentl.

The internet was very much on board with Portman’s apparently ad-libbed call-out. 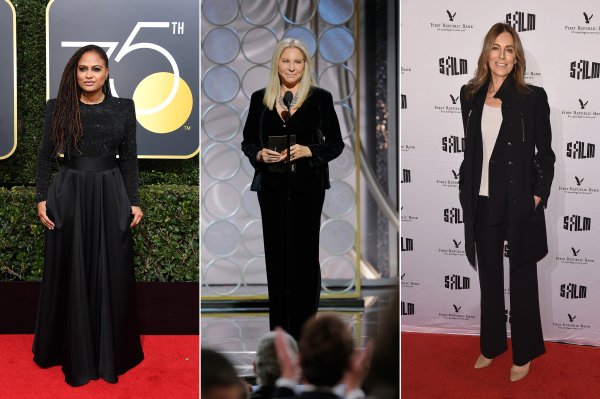 Here's How Rare It Is For a Female Director to Be Nominated for a Golden Globe—Let Alone Win
Next Up: Editor's Pick