It’s arrived: the first single off of Taylor Swift’s upcoming sixth album, Reputation, dropped Thursday night as promised. “Look What You Made Me Do” is Swift’s first new song since her collaboration with Zayn for Fifty Shades Darker, “I Don’t Wanna Live Forever,” released earlier this winter. Her last full album, 1989, came out back in 2014.

As with her last album’s lead single “Shake It Off,” Swift bestowed this single to the public in late August in advance of her traditional autumn album launch; Reputation is slated for a Nov. 10 full release. “Shake It Off” was Swift’s longest-lasting Billboard Hot 100 hit, staying on the charts for 50 consecutive weeks.

This song comes at the end of a long week of endless speculation and fandom frenzy over Swift. Last Friday, the singer wiped all the content from her digital presence, leaving fans in the dark about her plans. On Monday, she began teasing new music with cryptic short videos of a digitally-rendered snake. On Wednesday, she finally announced the album’s title and release date, and noted that this single would be forthcoming. As expected, fans — who have waited a long three years for the Grammy-winning pop star’s new work — went into an immediate tizzy over the new music.

You can stream “Look What You Made Me Do” in Spotify or buy on iTunes. 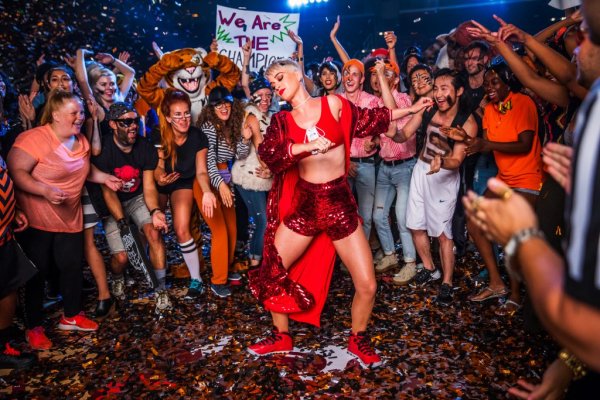