With only three episodes to go, season seven of Game of Thrones is more than halfway over. But considering how action-packed the first four episodes were — did someone say dragon battle? — the people of Westeros still have a wild ride ahead of them.

From Daenerys landing on Dragonstone’s beaches to the Unsullied taking Casterly Rock, many of the scenes featured in this season’s trailers have already aired. But there are still some we’ve yet to see. Here is every new Game of Thrones trailer scene still to come from this year’s previews.

0:06: Cersei Lannister has been in the Red Keep’s new map room several times this season, but not when she’s been rocking a fur. Are the Queen’s winter looks somehow going to be even more fierce than her summer ones?

1:00: A group of Northerners and/or Wildlings hastily retreating through a mountain pass. Things are about to go south fast beyond the Wall.

1:05: Looks like those same soldiers realized they couldn’t outrun what was chasing them.

1:19: Arya Stark checking under a bed. Hopefully she’s searching for Littlefinger to put an end to his scheming once and for all.

1:21: Jon Snow and Tormund getting the hell out of dodge. We’re willing to bet these snowy action shots are all connected.

0:23: Whether or not he decides to bend the knee to Daenerys, Jon is definitely making it back North.

0:33: Boats landing on Dragonstone have dominated this season. Looks like there’s at least one more to go.

1:00: The Hound is about to get a real-life glimpse of the army of dead he saw in the flames.

1:02: Judging by this week’s promo, Bran might start warging into ravens to keep an eye on the White Walkers’ progress.

1:03: But the Night King doesn’t appear to be too fond of his prying eyes.

1:04: We can only assume Bran is going to continue to make people uncomfortable with his strange behavior. Looks like Maester Wolkan may be his next victim.

1:07: Beric Dondarrion has already been resurrected six times. Let’s hope his flaming sword keeps him from needing a seventh reprieve.

1:16: We haven’t seen Tormund since he agreed to take the Free Folk to guard Eastwatch-by-the-Sea in the season premiere. It’s about time everyone’s favorite Wildling gets in on the action.

1:22: The Hound may be headed North now but looks like he’s eventually going to return to warmer regions. Cleganebowl anyone? There’s also a chance this could be young Ned Stark during another Tower of Joy flashback.

1: 24: Good thing Jon had time to mine all that dragonglass if a battle with the White Walkers is on the horizon.

1:26: Gendry is probably going to have some trouble adjusting to dry land after all those years he spent rowing.

1:37: Sansa’s cryptic, “the lone wolf dies but the pack survives,” voiceover doesn’t bode well for what looks like an injured and fleeing Jon.

1:43: This season has clearly been building toward some epic battle of ice and fire. Looks like Jon will be at the center of it. 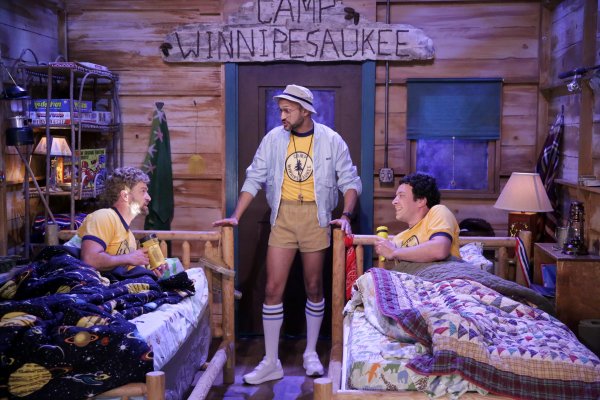 Watch Jimmy Fallon Burst Into Laughs in His Latest Justin Timberlake Duet
Next Up: Editor's Pick