People leave flowers as a tribute to the police officer who lost his life on the Champs-Elysées boulevard in Paris when a gunman opened fire on police officers, one day after the attack, on April 21, 2017.
Aurelien Meunier—Getty Images
By Kevin Lui

Terror has struck a major British city for a second time in as many months. U.K. police are treating the Monday night explosion that killed at least 22 at an Ariana Grande concert in Manchester as a terrorist incident, exactly two months after a lone attacker mowed down pedestrians with an SUV and stabbed a police officer outside the Houses of Parliament in London.

While no group has yet claimed responsibility for Monday night’s blast, analysts said the nature of the attack fits in with the targeting strategies of Islamic militants. It’s the latest in a long string of attacks that have maimed multiple European cities in the past year. From trucks being driven into crowds to shootings and stabbings, the effort to strike fear into the heart of people across Europe has morphed into different forms. Here are a list of recent major terror attacks that have hit Europe:

On Bastille Day, France’s national day, a truck slammed into celebrating crowds gathered on the coastal resort town’s Mediterranean seafront, killing at least 84 and seriously injuring 18 others. The perpetrator, shot by police on the scene, was later reported to have been “radicalised” by ISIS. At that point, France had already been in a state of emergency since the previous November, when a series of coordinated attacks across Paris took over 130 lives — ten months after the satirical newspaper Charlie Hebdo’s offices were raided by extremist gunmen in January 2015.

Two people broke into a Catholic church in the town of Saint-Etienne-du-Rouvray during morning Mass, taking five people hostage. The assailants stabbed the church’s 86-year-old priest in the chest and slit his throat. After the incident was resolved, then President François Hollande told journalists that the perpetrators acted in the name of ISIS. One of the suspects was reportedly wearing a tracking device during the incident, following two attempts in 2015 to travel abroad — to Syria on one occasion — assuming a relative’s identity.

December 2016: Truck attack at a Christmas market in Berlin

In an evening less than one week before Christmas 2016, a hijacked truck carrying Polish plates deliberately plowed through a crowded Christmas market in the center of the German capital, killing at least 12 people and wounding 50 others — the truck’s original Polish driver was among those killed. The 24-year-old attacker, who was later shot dead by Italian police in Milan, was reportedly a failed asylum seeker awaiting deportation at that time. Rightwing populists across the continent poured blame on German Chancellor Angela Merkel and her policy of welcoming refugees into the country.

February 2017: Attempted knife attack outside the Louvres in Paris

An attempted attack by a knife-wielding man trying to enter the grounds of the arts museum in central Paris was stopped when a French soldier guarding the site opened fire, seriously wounding the suspected invader. Two machetes were found at the scene of the incident. Hollande said there was “no doubt” the attempted incursion was terror-related.

March 2017: SUV and stabbing attack at Westminster in London

On March 22, an SUV deliberately rammed into pedestrians on Westminster Bridge, before the driver got out and fatally stabbed a police officer outside the Houses of Parliament, in an attack billed by British police as being “inspired by international terrorism.” Four people in total were killed, including two tourists, one from the U.S. and another from Romania. The attacker, who was shot and killed on the scene, was later identified as a 52-year-old man who was known to police and had records of multiple convictions.

April 2017: Shooting on the Champs-Elysees in Paris

Three days before France went to the polls in the first round of its presidential election, a man shot police officers on the boulevard with an automatic weapon, killing one of them before he himself was killed. ISIS has claimed responsibility for the attack, identifying the attacker with a pseudonym. The attacker, a 39-year-old man from an eastern Paris suburb, was reported to have been detained earlier in February for threatening police, but subsequently freed due to lack of evidence. 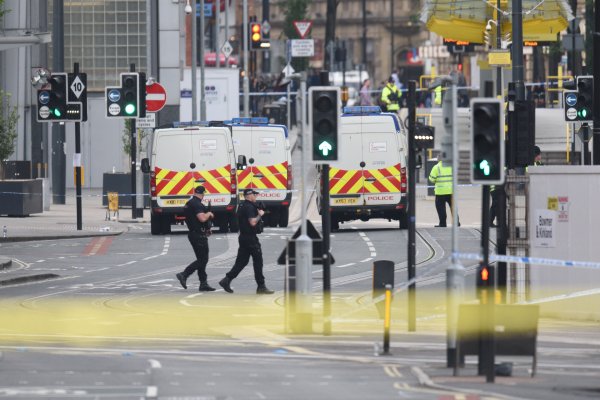 World Leaders React to the Manchester Suicide Bombing
Next Up: Editor's Pick