At least 22 people were killed in a suicide bomb attack at the end of an Ariana Grande concert in Manchester, England on Monday night. Some 59 people were taken to hospital with injuries and many more were treated at the scene. Nearly 24 hours after the incident, some concert-goers are missing, with their family and friends making desperate appeals on social media.

Here are some key details of what happened Monday night:

Police received reports of an explosion at the Manchester Arena just before 10:35 p.m. local time. The arena — located in the northern English city of Manchester — has a capacity of 21,000 and attracts more than one million people each year, according to the venue’s website.

Officials at the Manchester Arena said in a statement that the incident “took place outside the venue in a public space,” said to be a foyer near the box office.

Witnesses described a chaotic scene as concert-goers fled the arena when they heard a “loud bang” shortly after the concert ended, according to the Manchester Evening News.

“We saw the smoke. Everyone just fled. Some people were injured. We saw blood on people when we got outside. People were just running all over the place,” David Richardson, who was at the concert with his 13-year-old daughter Emily, told the Evening News.

How many victims are there?

Twenty-two people were killed and at least 59 others were injured in the incident, Greater Manchester Police have said. Chief Constable Ian Hopkins confirmed at a press briefing at 7 a.m. local time (2 a.m. EDT) Tuesday that children were among those killed.

He said the attack was carried out by one man carrying an improvised explosive device (IED), who also died on the scene. He urged the press and public “not to speculate” on the identity of the attacker.

The local North West Ambulance Service said on Twitter that it had “taken 59 casualties from the Manchester Arena incident to various hospitals” and “treated a number of walking wounded on scene.” Some 60 ambulances were dispatched after the attack.

Is everyone accounted for?

No. Many concert-goers are still missing. Desperate friends and relatives have taken to social media to spread the word using the hashtag #MissinginManchester.

The Manchester police chief has confirmed the bombing suspect is 22-year-old British-born Libyan Salman Abedi. Officials are examining Abedi’s trips to Libya as they worked to piece together his allegiances and foil any new potential threats.

Although British Prime Minister Theresa May confirmed Abedi as the suspect, she did not rule out the involvement of others. “Its a possibility we cannot ignore that [there is] a wider group of individuals linked to this attack,” May said Tuesday evening.

Interior minister Amber Rudd echoed May’s sentiments during an interview with BBC Radio 4 Wednesday morning. “It seems likely, possible, that he wasn’t doing this on his own,” she said. Rudd also said Abedi had been known to security services before the bombing.

British police and intelligence agencies arrested a 23-year-old man on Tuesday and three more suspects on Wednesday in connection with the attack, although no more information is known about the arrests at this time.

What is ISIS’ involvement?

ISIS claimed responsibility for the attack on Tuesday. A statement made via ISIS channels on the messaging app Telegram said that “one of the soldiers of the caliphate placed explosive devices in a gathering of crusaders in the middle of the British city of Manchester.”

However, the United States’ top intelligence official said Tuesday that the U.S. government has not verified ISIS’ claim of responsibility. Speaking about the terrorism threat before the Senate Armed Services Committee, Dan Coats, the director of national intelligence, said: “It’s not going away and it needs significant attention.”

What has Ariana Grande’s reaction been?

The 23-year-old pop star was not injured in the attack, which took place shortly after she finished performing. Shortly after the bomb went off, she tweeted: “Broken. From the bottom of my heart, I am so so sorry. I don’t have words.”

Her manager Scooter Braun tweeted a statement, reading in part: “We mourn the lives of children and loved ones taken by this cowardly act.”

Grande is currently on the Dangerous Woman international tour. Her next performance is scheduled for London on Thursday, but her spokesperson said it was “highly unlikely” she would perform.

How does this affect the U.K. general election?

Britain is scheduled to vote in a general election on June 8. The BBC says that the major British political parties — the Conservatives, Labour, the Liberal Democrats and the Scottish National Party — have all suspended campaigning.

British Prime Minister Theresa May called the blast “an appalling terrorist attack.” Leading political figures from the U.K. and beyond expressed their shock, grief and solidarity on Twitter.

Leaders around the globe have began tweeting and sharing their responses. French President Emmanuel Macron, whose country has repeatedly been targeted by terrorists since 2015, sent a message of solidarity. “I send my thoughts to the British people, the victims and their loved ones,” he wrote, in French. “We are leading the fight against terrorism together.”

Speaking in Bethlehem, U.S. President Donald Trump said: “We stand in absolute solidarity with the people of the United Kingdom. So many young beautiful, innocent people living and enjoying their lives murdered by evil losers in life.” He added that society “can have no tolerance for this continuation of bloodshed.”

How have the U.K. authorities reacted to the attack?

Extra police offers were deployed in the capital as Londoners started their journeys to work, according to a statement by Cressida Dick, Commissioner of the Metropolitan Police Service. “This will continue for as long as it is needed, and the mix of armed and unarmed officers are there to reassure,” she added.

Amber Rudd told the BBC that up to 3,800 soldiers would be deployed on Britain’s streets, freeing up police officers to carry out patrols and investigatory work.

Write to Kate Samuelson at kate.samuelson@time.com and Katie Reilly at Katie.Reilly@time.com. 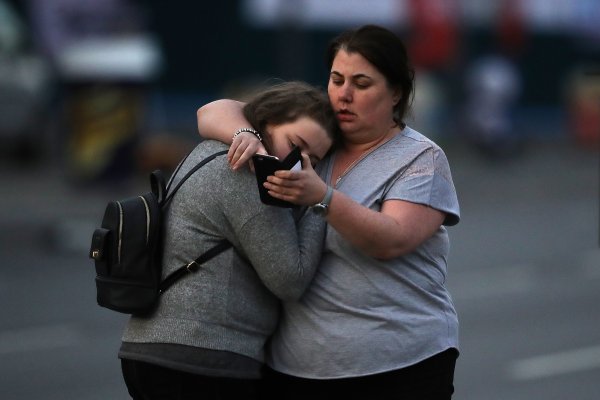