'This Tweet Didn’t Age Well.' 22 Tweets That Came Back to Haunt President Trump

President Trump is the first commander-in-chief to take office with a Twitter paper trail.

Since joining the social media site in March of 2009, Trump has sent more than 34,000 tweets on everything from his disappointment in the Academy Awards to hard-charging criticism of Democratic politicians.

As president, that’s meant Trump now has to contend with his old tweets coming back to haunt him, as they did this week when his past tweets about attacking Syria complicated his attempts to deal with a chemical attack there.

It’s happened enough that there’s even a meme for the occasion: “This tweet didn’t age well.”

“We’ve never been in this kind of situation before,” Drake University law professor Shontavia Johnson said. “We have more of a complete picture of Donald Trump the citizen and what he really believes, or at least the views he wanted to promote in the past.”

Jonathan Nagler, a politics professor at New York University, said Trump and other politicians better get used to it.

TIME used data from Keyhole, a social media analytics tool to track when President Trump’s old tweets saw a spike in retweets. Here’s a look at 21 that came back to haunt him.

What he meant: After buying one of Scotland’s landmark golf courses, Turnberry, Trump shared a quote attributed to the flamboyant golf champion Walter Hagen.

Why it didn’t age well: When Trump lost the Iowa caucuses to Texas Sen. Ted Cruz on Feb. 1, 2016, he said he was “honored” to come in second, leading critics to dig up this old tweet.

What he meant: Trump has long denounced the science behind global warming, even calling it a hoax invented by the Chinese.

Why it didn’t age well: The tweet saw new traction after Trump ramped up his rhetoric related to global nuclear proliferation tweeting about expanding U.S. nuclear capability on December 22.

What he meant: Trump voiced frustration when then-Republican presidential nominee Mitt Romney, who he had endorsed, was headed toward a loss on Election Night.

Why it didn’t age well: This tweet took off once Trump — who lost the popular vote by nearly 3 million votes — was sworn in as the 45th president on January 20.

What he meant: As Romney headed for defeat, Trump also clamored for a march on the nation’s capital to oppose Obama’s re-election.

Why it didn’t age well: Mass-sharing of this call to action spiked as millions worldwide took part in the Women’s March on Washington to protest what demonstrators viewed as the Trump Administration’s discrimination against women and minorities on January 21.

What he meant: The cheery promotional tweet from Trump Hotels in 2011 asked followers to chime in with vacation anecdotes.

Why it didn’t age well: This tweet spiked after Trump signed his first executive order temporarily banning travel from seven Muslim-majority countries and indefinitely halting Syrian refugees on January 27. People quoted the tweet while sharing hardships of being a refugee.

What he meant: In a series of tweets, Trump raised eyebrows when he expressed that he felt the Duchess of Cambridge only had herself to blame for paparazzi photographs taken of her sunbathing without a top in September 2012.

Why it didn’t age well: This tweet came back into the spotlight when Trump accepted Britain’s Prime Minister Theresa May’s January 27 invitation to the United Kingdom for an official visit, presumably with a stop at Buckingham Palace.

What he meant: As a candidate, Trump called for “a total and complete shutdown of Muslims entering the United States,” arguing that they were a risk for terrorism.

Why it didn’t age well: After Trump enacted a travel ban on seven Muslim-majority countries, several federal judges cited his own statements about a proposed Muslim ban when ruling against the ban. The tweet spread when judges blocked the ban on February 5 and again on March 16.

What he meant: President Obama had just made a deal to return Sgt. Bowe Bergdahl to the U.S. in exchange for the release of five Afghan terror suspects detained at the U.S. prison in Guantánamo Bay, Cuba.

Why it didn’t age well: This tweet went viral during Trump’s first week in the Oval Office, and anytime when the Trump Administration into trouble, such as on February 13 when Trump fired Michael Flynn for misleading the vice president.

What he meant: Trump criticized then-President Obama for golfing too much while he was in office, even promising at one point to give him free golf course access for life if he would resign.

Why it didn’t age well: Retweets took off after Trump visited Mar-a-Lago on March 17, his fifth visit to the golf club he owns in Palm Beach. Trump has been to his golf courses 13 times since taking office, though it’s not always clear when he has golfed. His aides argue that he uses his time on the course more productively than Obama.

What he meant: Trump was refuting a story from the Washington Post that his transition team had asked about getting security clearances for Ivanka, Eric, and Donald Trump Jr. to allow them to view classified information.

Why it didn’t age well: Retweets spiked after March 21 when a White House official confirmed Ivanka Trump would get a security clearance after all.

What he meant: As a businessman whose signature book was called The Art of the Deal, Trump loves to brag about his dealmaking. This tweet came when he was previewing the fourteenth season of Celebrity Apprentice.

Why it didn’t age well: After the Republican health care bill was pulled from a House vote on March 23, this tweet’s numbers jumped as Trump’s critics repurposed the line as a lighthearted meme poking fun at their own deal-sealing capabilities.

What he meant: A longtime critic of the Affordable Care Act, Trump may have been referencing the Obama Administration lagging behind its enrollment goals.

Why it didn’t age well: Retweets spiked after Trump demanded a make-or-break vote on the GOP’s health care legislation on March 23. The Congressional Budget Office said would lead to 24 million fewer people to have insurance.

A Democratic senator even trolled Trump:

The Art of the Deal

What he meant: Trump was sharing a line from his ghostwritten book, The Art of the Deal, which he often likes to cite or make references to.

Why it didn’t age well: Critics recirculated the old tweet when House Republicans withdrew their bill to repeal Obamacare, a campaign promise from Trump and GOP lawmakers on March 23.

What he meant: Unclear. Trump wrote this tweet around the time that President Obama signed a bill warding off the “fiscal cliff” and a defense bill that restricted him from transferring detainees from Guantanamo.

Why it didn’t age well: Retweets rose after House Republicans withdrew their bill to repeal Obamacare due to lack of support on March 24.

What he meant: Trump denounced then-President Obama when his Gallup approval rating first dipped below 40%. At the time, Trump spoke out against Obama on Fox News, arguing that he let OPEC nations take advantage of America.

Why it didn’t age well: This tweet surged after Trump’s approval rating hit 36% marking a new low in his young tenure on March 27. Critics again recirculated the tweet to mock Trump for dipping below Obama’s lowest approval rating of 38%.

What he meant: Trump was criticizing Clinton aides who were given immunity during an FBI investigation into her use of a private email server while Secretary of State. He argued that showed they were guilty of a crime.

Why it didn’t age well: Retweets surged after Trump’s former national security advisor, Michael Flynn, offered to testify before Congress about his ties to Russia in exchange for immunity on March 30. Trump defended his request.

What he meant: Trump was criticizing President Obama, who launched airstrikes against Syrian targets after criticizing Syrian President Bashar al-Assad’s regime for years.

Why it didn’t age well: After the Syrian government again used chemical weapons on civilians this week, Trump said the actions “crossed a lot of lines” and might push him to adopt a more forceful posture.

What he meant: After the British parliament rejected a move to help the U.S. punish the Syrian government for use of chemical weapons, the Obama Administration planned a limited military strike on its own.

Why it didn’t age well: After reports that Bashar al-Assad’s regime again used chemical weapons against civilians, the tweets spiked when the Trump Administration launched Tomahawk missiles at a Syrian airfield on April 6. Two other tweets about Syria spiked that night as well:

What he meant: Trump may have been referencing a Freedom of Information Act lawsuit against the Air Force and the Secret Service over the costs of a trip to Aspen by Michelle Obama and her daughters.

Why it didn’t age well: The tweet resurfaced on April 14 after TIME reported that the White House could not be releasing visitor logs, as it had done under President Obama.

With Pratheek Rebala in Washington 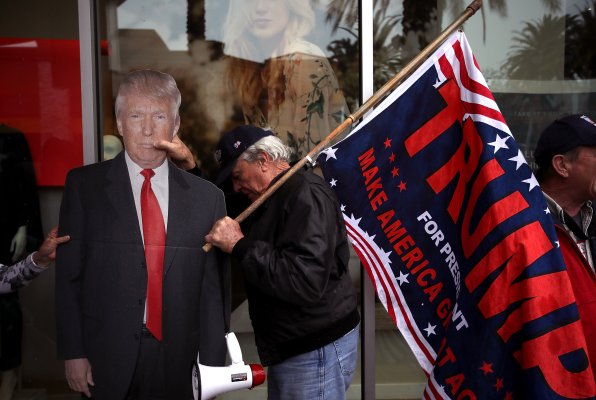 Less Than Half of White Men Support Trump
Next Up: Editor's Pick