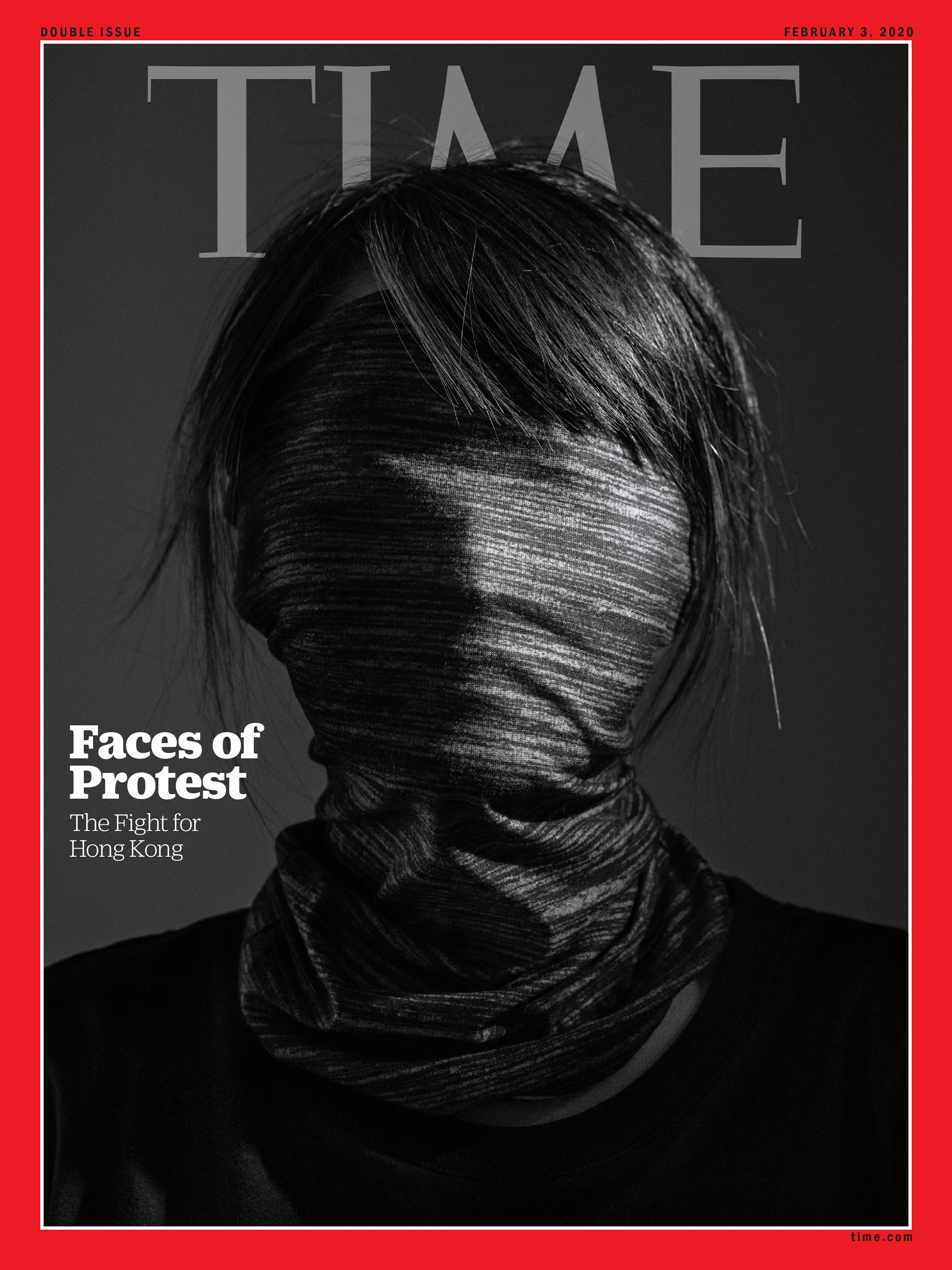 “Only when there is chaos in society does the government pay some attention to our demands. I think that all police are the same. Maybe I hate them too much, but I think that whatever protesters do, whether they slash their necks or whatever, I think there’s no problem.” — Jane, 21
Adam Ferguson for TIME

'I Absolutely Will Not Back Down.' Meet the Young People at the Heart of Hong Kong's Rebellion

By Laignee Barron | Photographs by Adam Ferguson for TIME

At 15 years old, Yannus is too young to drive a car, buy a beer or donate blood. But he says he is willing to give his life in the “final battle” for Hong Kong.

“Maybe I will die for this movement,” he says, at the edge of one of the pitched battles that demonstrations have frequently become over the past eight months. As protesters beside him pour Molotov cocktails, the teenager straps on a motorcycle helmet to hide his face from cameras and facial-recognition software. Like every protester TIME spoke with, Yannus gave a pseudonym out of concern for his safety. But in his pocket he keeps a handwritten will, addressed to his parents and friends. “I’m ready,” he says, tapping it.

“We front liners are just a group of students, born in Hong Kong. We have no training or professional knowledge. I won’t reveal how much I’ve escalated my use of violence, or any future plans, but I absolutely will not back down.” — Sylvia, 23
Adam Ferguson for TIME

Young people around the world, in the Middle East and Latin America and beyond, are railing against sclerotic regimes, economic frustrations and backsliding democracy. In Hong Kong, a semi-autonomous enclave of China with liberal traditions, the protesters are seeking to “reclaim” their city from authoritarianism. At the movement’s core are high school and university students who cast themselves as urban street fighters, willing to gamble away their futures if it helps preserve their home.

When marchers first took to the streets in June, they had one goal: the withdrawal of a proposed bill that would have allowed extraditions to mainland China. The legislation was eventually scrapped, but the demands broadened amid growing fears that Beijing is eroding the unique freedoms — of press, assembly, speech — that differentiate this cosmopolitan hub of 7.5 million from the rest of China. The endgame remains murky, with no consensus among protesters over whether to ultimately seek independence, universal suffrage or some other semblance of greater autonomy. For now, they have rallied around a common enemy.

"I join demonstrations, but I don’t stand in the front line. I mostly do backup and raise awareness. I’ve organized a lot of activities at school, such as a class boycott. We’ve organized film screenings and talks, hoping to politically enlighten the younger students." — Boris, 16
Adam Ferguson for TIME
"My father and mother are opposed to me going to the protests. They don’t want me to protest — they call it rioting. Every time I go, I need to hide myself. [My father] doesn’t know I’m on the streets." — Jeff, 15
Adam Ferguson for TIME

November brought not a climax but a crescendo, when police besieged two university campuses where protesters had barricaded themselves with stockpiled weapons, including bows, arrows and meat cleavers. In daring escapes, students abseiled down multi-story buildings to waiting motorcyclists or swam out through sewers. The standoff gave way to relative calm during local elections on Nov. 24 in which pro-democracy candidates won a landslide.

But the rallies continue, intermittent and vast. Organizers contend 1 million gathered on New Year’s Day to show anger at the police’s handling of the unrest. The city’s Chief Executive, Carrie Lam, conceded on Jan. 7 that protest violence will persist this year.

"I've tasted tear gas. I've been hit by a rubber bullet. I set roadblocks. No one taught me, I just saw people do it and I tried to help. I feel nervous. I can’t be scared, though, because I stand in the front lines and people stand behind me. I need to protect them. Some of them are younger than me." — Zita, 16
Adam Ferguson for TIME

To end the upheaval, the city’s government has two options, says Andrew Junker, a sociologist at the Chinese University of Hong Kong. Either they can “arrest their way out of it,” he says, or they can give in to some of the protest demands, like a formal investigation into alleged police brutality. Without political concessions, he warns, insurgency “is the logical outcome.”

Many of Hong Kong’s young combatants already say they would rather be martyrs than inmates, especially when convictions for offenses such as arson can lead to life sentences in prison. “I would rather die than be arrested,” says Calvin, 21. “If I die, at least the fury would sustain this movement.”

"I study public administration. Initially I considered joining the government — to change them by becoming part of them. But that’s too naïve. We have to do something outside the system like we’re doing now. If we join the system, there will only be two outcomes. Firstly, I will be destroyed by the system. Secondly, nothing happens and I am assisting the system, helping it to become worse." — Matthew, 22
Adam Ferguson for TIME
"At the start of the movement, I was a peaceful protester. But after one million, two million people marched on the streets and the government didn’t respond, I decided to join the camp of more radical protesters. We won’t give up because we have already started on this path of no return. We believe that we cannot lose this time." — Kelvin, 20
Adam Ferguson for TIME

Calvin considers himself part of Hong Kong’s so-called chosen generation, poised to collide with an increasingly assertive Beijing. Born around the time the U.K. ceded control of its colony in 1997, this Hong Kong generation barely identifies with the world’s ascendant superpower, mostly seeing it as a threat to their way of life. Beijing agreed to maintain Hong Kong’s separate legal and political systems only until 2047. Those who expect to be in late middle age by then fear they have the most to lose if the freewheeling city fails to preserve its autonomy.

On top of that, Hong Kong is one of the world’s most expensive cities, where economic inequality is starkly visible, luxury apartments towering over “coffin” homes made up of tiny subdivided cubicles. Like others of their generation around the world, they endure a “precarious status,” says Edmund Cheng, a political scientist at the City University of Hong Kong, “meaning uncertainty in the future in terms of job prospects and in terms of social mobility.” Cheng says young Hong Kongers have found both a collective identity and a sense of purpose on the protest front lines.

"My family thought I was a peaceful guy, marching. Then I told them that I was going to the front line. Since then, they worry about me." — King, 17. "My parents don’t know we’re dating. They are supportive of the protests, but they’re worried about my safety, even if it’s a peaceful rally." — Ceci, 17
Adam Ferguson for TIME

But in their quest to safeguard their city, they have plunged a thriving metropolis into chaos. In the past, the pro-democracy uprisings mostly consisted of marches so orderly that after candlelight vigils, citizens stayed to scrape wax. Now, high-traffic neighborhoods denser than Manhattan have become scenes of bloody, fast-moving battles.

"As a medical student, providing first aid is something I can do to help. The worst injury I had to treat was a protester who got hit in the head with a tear-gas submunition. Her whole head was bleeding, and she was coughing up blood." — July, 23
Adam Ferguson for TIME
"It is scary to be on the front lines, but that’s not going to stop me from protecting the people behind me, from protecting Hong Kong. Even though I wasn’t born until after 1997, I can see with my own eyes that Hong Kong is sinking. It is moving backwards." — Ben, 20
Adam Ferguson for TIME

Protesters have grown more radical, authorities more repressive, and the middle ground is vanishing. Retail outlets now identify as “yellow” (pro-protests) or “blue” (pro-authorities), and people vote accordingly with their wallets. Police have seized weapons caches and defused several homemade bombs, including two found on school grounds. A man critical of the protesters was set alight in November, while police have shot three protesters with live ammunition, nonfatally. There have been two protest-related deaths: a university student who fell from height during clashes with police, and an elderly cleaner struck by a brick lobbed by a demonstrator.

Among the dozens of protesters interviewed by TIME for this story, there is widespread certainty that escalation is the only way to confront Beijing. The nonviolent Umbrella Movement of 2014 failed to achieve its goals of electoral reform, and today’s generation of protesters is unwilling to abide by red lines. “Some people might say we have to kill a police officer,” says M., who asked to be identified only by her initial. “I would not stop them.”

Even veteran pro-democracy activists are loath to condemn violence and have credited the front liners, or “the braves” as they are called in Cantonese, with forcing the government to backtrack on the extradition bill. And while protest fatigue has set in, public opinion remains largely unified against the government. “The middle and the professional classes are furious at the government and are furious [that] they have been losing economic power for the last 15 years,” says Junker.

"I joined the front line at the end of September. A lot of us have been arrested. Being arrested is not that scary. I am just worried what will happen if we lose this protest ... I really love this place. It has loved me for 19 years, and if it takes me 10 years in prison to save Hong Kong, then I am willing to do this." — Edison, 19
Adam Ferguson for TIME

Further concessions appear unlikely, however. Instead of acceding to political demands, Beijing has appointed a new director of the central government’s liaison office in Hong Kong to act as enforcer. Since June, nearly 7,000 people have been arrested, more than 1,000 under the age of 18. The next generation of Hong Kongers are already mobilizing to join the fight, with 12-year-olds spotted on the front lines and elementary school students staging strikes and singing the protest anthem “Glory to Hong Kong.”

“If they keep arresting us until no one is left on the streets, then the activity will go underground,” says Sabrina, a 19-year-old student. Behind her, on a highway divider near Victoria Park, a line of graffiti spells out the front liners’ ultimatum: Freedom or Death. “There will be no telling,” she says, flashing a smile, “when we will come back out and strike again.” — With reporting by Amy Gunia and Hillary Leung/Hong Kong