Hong Kong Protestors Built a 'Fully Functioning City' Inside a Besieged University. Here's What It Looked Like

An armored police van is engulfed in flames on a bridge overlooking the Cross-Harbour Tunnel, Nov. 17, 2019.
Bing Guan
By Amy Gunia / Hong Kong

Anti-government protesters have been holed up in a Hong Kong university for days, surrounded by police. Photographer Bing Guan has spent the last five days with them, documenting the siege—and at the time of publication of these images he remains on the campus.

The occupiers originally numbered in the hundreds. But around 800 protesters who originally barricaded themselves inside Polytechnic University (PolyU) had surrendered as of Tuesday night. Others attempted daring escapes, crawling through underground sewerage systems or abseiling off a footbridge to make their way to waiting getaway vehicles below.

Now only a few hardliners remain.

PolyU has been the scene of some of the fiercest battles since the unrest began in June. Enraged by the death of a university student, protesters took over the campuses of several universities across the city last week. Students camping out at PolyU quickly began preparing for a protracted standoff.

A frontline protestor eats a late-night hot dog at the "American Diner" on the Polytechnic University campus, Nov. 15, 2019.
Bing Guan

“Within a matter of hours, they turned this place into a fully-functioning city,” Bing tells TIME by phone.

Volunteer chefs whipped up hamburgers and french fries in the campus diner, and improvised pizza from bread, cheese and tomato sauce they found in the school’s canteen, to feed the hundreds of protesters who descended on the campus.

A protestor sleeps near a box of petrol bombs in the canteen at PolyU, Nov. 18.
Bing Guan

Students turned the drained swimming pool into a practice range for Molotov-throwing practice and a gymnasium into de facto barracks. “There were mattresses, foam mats that they’d commandeered from the gym laid out, with blankets, pillows, clothing, gear,” Bing says.

Teams of protesters began stockpiling petrol bombs, in anticipation of a confrontation with police.

“There are Molotovs in the bathrooms, in the gymnasium, in the locker rooms.”

Bing adds that morale was high among protesters for the first few days. “People were tidying up everything, picking up recycling, sweeping up, people were being really fastidious about cleaning up the campus,” he says.

“They were assembling Molotovs, teaching each other how to shoot bows and arrows, building barricades and spray painting graffiti everywhere.”

A protestor readies his bow and arrow at PolyU, Nov. 18.
Bing Guan

For days, protesters kept police from entering the campus, countering volleys of tear gas and rubber bullets with petrol bombs, slingshots and bows and arrows. On Sunday, police attempts to enter the campus were met with particularly fierce resistance. Officers surrounding the university threatened the use of live ammunition, and warned those that decided to stay that they might be charged with rioting.

Undeterred, protesters set a police vehicle on fire with petrol bombs as it advanced on a bridge towards the school. A police officer was stuck in the leg with an arrow. Police responded with water cannon and students reported suffering from hypothermia as they spent the night in sodden clothes.

Protesters used whatever they could find inside the university. “Floor cleaning vehicles were transformed into makeshift ambulances or vehicles for bringing Molotovs to the frontline,” Bing says.

Bricks, used both to slow down advancing police as well as projectiles, are neatly sorted into garbage bins at PolyU.
Bing Guan

On Monday, hundreds of sympathetic Hongkongers, including office workers, ordinary residents, and the family members of students trapped inside, staged sit-ins outside the university’s exits, which were blocked by police officers. Other supporters took part in street battles in nearby neighborhoods—hurling petrol bombs and bricks at police—hoping to draw them away from the university so those inside could escape.

Protesters attempted to flee from the university on several occasions, but they were pushed back by volleys of tear gas.

“As it became apparent that the other protesters weren’t going to make it, that they weren’t going to be able to get past the police barricades and water cannons, people started surrendering themselves,” he says.

Lawmakers, educators and religious leaders also began arriving on campus to convince students to leave, and to negotiate their release with police officers.

The city’s leader, Chief Executive Carrie Lam, said in a Tuesday press conference that she had asked the newly-appointed police chief to resolve the matter peacefully. Lam said minors exiting the university would have their information collected and would not be immediately arrested—although they could face charges later on, she said.

Volunteers, some of whom had never cooked before, help prepare food for the protestors gathered at PolyU, Nov. 14.
Bing Guan

The number of protesters holed up inside the campus, Bing says, dwindled down to about 50 as of Wednesday. The once buzzing canteen now lies empty.

A canteen is seen inside PolyU after a three-day stand off between protesters and police, Nov. 19.
Bing Guan—EPA-EFE

“Right now, the place really looks apocalyptic,” Bing says. “There are plates of leftover food that have been sitting out for days. There are discarded clothing and supplies everywhere—respirators, medical supplies, spray paint, petrol bombs.”

A couple waits for news of a rescue operation for protestors still trapped in PolyU, Nov. 18.
Bing Guan

Bing says that it wasn’t an easy decision for those who decided to give up. “You could see it on their faces as they were leaving that they were wracked with guilt, feeling like they had not stuck by their friends.”

“At this point, there’s a lot of high school students left here, a lot of them are very terrified and desperate,” Bing says.

Those left on campus he says, are hiding out or looking for escape routes, but they remain defiant. “Some of them have been on the front lines since June,” says Bing. “They don’t want to surrender.” 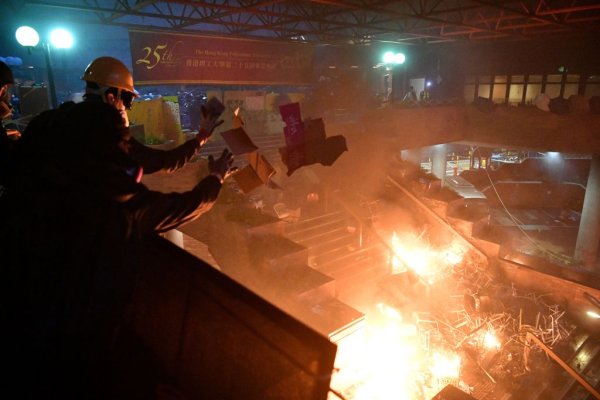 Handful of Holdouts Remain at Besieged Hong Kong University
Next Up: Editor's Pick