The authors’ characters stick with them: ­Guillory wonders what her protagonist, written to live in her neighborhood, would think of the new pizza shop. And Woodson warns, “Don’t kill a character off. They will haunt you forever.”
Nakeya Brown for TIME
By Rebecca Carroll

Black women have been honoring and lifting our voices, sharing our strengths, broadening our revolutionary scope since we got here. We tell stories that come through our hair and our hips, our shoulders and our ride-or-die stride as we walk alongside one another, tethered to our tropes, ever strong, mammified, over-sexualized but ultimately free together. Brit Bennett, Jasmine Guillory and Jacqueline Woodson are three of our finest novelists in America today. They tell narrative stories with grace and nuance, humor and curiosity, and with characters who exist because Black women called them to live. The four of us spoke about the long-standing contributions of Black women writers, who holds the power in publishing and the notion of a renaissance. —R.C.

Rebecca Carroll: You’ve all had books on the New York Times best-seller list—that’s pretty remarkable. My first book was a collection of interviews with Black women writers because it was the first time that three Black women were on that list: Toni Morrison, Terry McMillan and Alice Walker. Now that has changed. What do you attribute that shift to?

Jasmine Guillory: It’s not that suddenly Black women are writing more or buying more books. It’s that the books are in the marketplace, and they’re getting the power behind them so that the whole world can see how great we are.

Carroll: The power is a really important piece of this. Talk a little bit about what it feels like to be part of this moment when there are so many Black women on the mainstream lists.

Jacqueline Woodson: I remember when I wrote Autobiography of a Family Photo back in the ’90s, it was the White Boy Club: white boys were getting invited to the parties, getting the film contracts, getting the big advances. Publishers were saying, “Well, Black folks don’t buy books.” Out loud. The time has shifted, and that white-boy voice is much quieter—and our voices are amplified. There was one reviewer who asked me when I won the National Book Award, “What does it feel like to win such a big award?” And I was like, “Are you talking about the Coretta Scott King, or are you talking about the NAACP Image Award?” I love being on the New York Times best-seller list, but it means nothing if a Black kid in Brownsville doesn’t know my name.

Carroll: The power has shifted not organically, so that makes me nervous about the relative quickness that it could revert. What are your concerns about the power in publishing turning its focus on Black women writers?

Brit Bennett: I think of last year as the most recent surge of attention on Black writers. My book came out in the middle of that, and I kept having people ask me, “Have things changed for good? Was this a turning point?” I was always extremely skeptical of that idea. As Jasmine and Jackie have said, Black women have always been doing this work. I grew up in the ’90s, so I grew up in a world where I saw Morrison, Walker and McMillan. The idea that as a Black woman I could write something about Black women and achieve some type of mainstream success was never foreign to me. But at the same time, I agree that our work suddenly has been conferred this additional value because white people are now paying attention. It was very strange sitting in the contradiction of that as my book was published during the summer of anti-racist reading lists: of being glad to see my book and grateful readers were flocking to it, but also understanding that it was all external to the book.

Carroll: Jasmine, your genre has also been busted open and is getting new attention and love. What do you think about how people are responding to romance?

Guillory: I write romance novels for and about Black women. And I am grateful that a lot of people who are not Black women have bought my books and have appreciated them. But it’s interesting [to see] the different kinds of reactions I get from people who maybe don’t understand the things that I talk about, who don’t think about the ways in which Black women have not gotten that kind of love in media or throughout life. Someone said that one of my books “missed an opportunity to educate” them about racism.

Carroll: People want a list—they want a workbook, right? But whenever anybody asks me what they should be reading, I continue to say Toni Morrison, James Baldwin, Jackie Woodson, Brit Bennett. Even though we’re not spelling it out for you, what you need to know about Blackness and living within a white-supremacist country, it’s right there. You do the work… Bringing it back though to this idea of a Black creative renaissance, I wonder what the difference is between a cultural renaissance and a trend.

Woodson: A renaissance is a continuum. We’re here because of the Harlem Renaissance. All of our work has come before in some way, shape or form. As our country shifts racially, the creative work is shifting too. And I don’t ever expect to see that white-boy narrative again. I don’t ever expect to not be invited to somebody’s wiener roast in the way that we were in the ’90s.

Woodson: Yes, there’s no way of going back from here. We come from a people who were not allowed to learn to read and write, and here we are. We’re not going to unlearn. We also come from a people who were storytellers, and that was oppressed forever, and now that has broken open. We know our stories matter because the writers who came before us have showed us how we’ve been silenced and we have a right to speak. We’re not going to shut up. And in this, in the writing, we’re teaching our daughters.

Carroll: We just came off of a really tough year. But in that latter half of the year was this chorus of “Listen to Black women. Trust Black women.” What would it look like to truly listen to and trust Black women in this country?

Bennett: There was a way in which it rang pretty hollow to me. It falls into these various cultural expectations of what white people demand from Black women, whether it is wanting a mammy who cares for you emotionally and endlessly sacrifices herself, or a Black super-woman. These various tropes kept cropping up—Black women are swooping in to save America from itself. It’s like, no, we’re trying to save ourselves. A vision of America that is fair to Black women would by necessity also be better for a lot of other types of people, a vision of America that pushes back against misogyny and racism and classism and all these other isms.

Guillory: After the Georgia election, there was a lot of “Put Stacey Abrams in charge of the vaccine rollout.” You know, she should take a vacation first. She’s just had a pretty busy year.

Woodson: Our work is to take care of ourselves in some way. I’m tired of explaining to white people. If 2020 taught me anything, it’s that: it’s not my job. 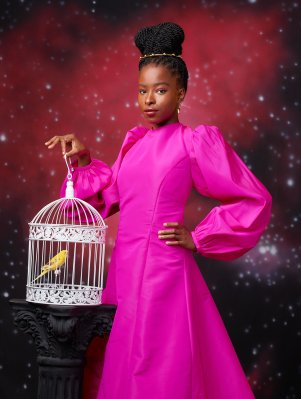 Amanda Gorman Interviewed by Michelle Obama
Next Up: Editor's Pick