Georgia Is Just the Beginning. It's Time to Tell a New Story About the South

President-elect Joe Biden along with democratic candidates for the Senate Jon Ossoff and Rev. Raphael Warnock greet supporters during a campaign rally the day before their runoff election in Atlanta, on Jan. 04, 2021.
Chip Somodevilla—Getty Images
Ideas
By Brittney Cooper
Brittney Cooper is a professor at Rutgers University and the author of Eloquent Rage: A Black Feminist Discovers Her Superpower.

Since 1968, American political fortunes have turned on the status of Southern politics. When Lyndon B. Johnson passed the Voting Rights Act of 1965, racially aggrieved white Southern Democrats defected to the Republican Party, a move that Richard Nixon exploited as part of his infamous “Southern Strategy.” This week, when Georgia voters cemented the turning of Georgia back to blue with election wins for two new Democratic senators, Rev. Raphael Warnock and Jon Ossoff, plus Joe Biden’s win there in November, they set a new course for Southern politics in the 21st century. This new course now offers a blueprint for wholly dismantling the old Southern strategy, not by bringing white voters back into the Democratic fold, but by diversifying the Democratic Party’s base with young voters, who are disproportionately of color.

But the South will not be won without resistance.

On Wednesday, liberal celebrations of the victory in Georgia were short-circuited by an insurrectionist mob, angry over Biden’s and Democrats’ victories in the 2020 election season. Those victories collectively returned Democrats to power in the executive and legislative branches of government, effectively curtailing the power of Trump’s brand of leadership. This mob, many of them carrying Confederate flags, besieged the U.S. Capitol building, endangering the lives of Capitol police officers and sitting U.S. congresspersons.

Just before rioters breached the building, Ted Cruz gave remarks in the Senate chamber, calling for a 10-day audit to review the results of the 2020 election. His model for such an unprecedented call was the infamous and racist Hayes-Tilden Compromise of 1876, that ended the Reconstruction process by giving Rutherford B. Hayes, the GOP candidate the presidency, in exchange for an agreement to remove federal troops from the U.S. South. That agreement led to a nearly century-long reign of racial terror that reinvigorated the Ku Klux Klan, subjected Black people to quotidian forms of racial terror and mob violence, violently ejected Black men from both government office and the public sphere through lynching and the threat of it, and subjected Black women to rape at the hands of ravenous white men. It is this violent racial past that made the elections of Warnock and Ossoff in the home state of both Martin Luther King, Jr. and John Lewis, so significant.

Watching images of the Confederate flag being carried through the Capitol Rotunda ought to make clear to us that a significant faction of Americans crave a return to the lawless and brazen white supremacy of two centuries ago. But this week in Georgia, that faction did not win. Spearheaded by Stacey Abrams and her organization Fair Fight, together with many activist and grassroots organizations, Georgia turned a brilliant deep shade of blue, very close to purple, but blue nonetheless.

Now is the time to tell a new story about the South, one not steeped in stereotypes of backward white people and submissive Black people who refuse to participate in calls for change. Certainly, this runs counter to our impulses as we watch very old forms of American racism take up so much mental and cultural real estate in this moment. But this is precisely why we must resist the narrative that retrograde 19th and mid-20th century racial politics are winning. They are not. Do not mistake the death rattle for a victory cry. And do not let the war cries of angry white people drown out the resounding and clarion calls from Black women organizers and strategists and voters of color who have made clear that Trump’s America is not their America.

The future of progressive politics lies in what will happen among Georgia’s neighbors to the west, Deep South states like Louisiana, Mississippi, Alabama and Texas, over the next decade. Alabama has a Black woman, Terri Sewell, serving in the House of Representatives, and just three years ago elected a Democrat to the Senate. The governor of Louisiana is a Democrat, and the mayors of its three largest cities are all Black people, two of them Black women. Jackson, Mississippi, is a current seat of radical Black politics, spearheaded by Mayor Chokwe Antar Lumumba, and with the right support Mike Espy might still mount a successful campaign for the U.S. Senate. There was also much buzz in the 2020 election season that Texas might go blue. It did not this time, but it is a player. These examples of progressive Southern politics (together with Joe Biden’s pivotal primary win in South Carolina largely because of Black voters) remind us that these victories in Georgia were not just about a reaction to Trump. Indeed Abrams’ vision to turn Georgia blue was borne during the first term of the Obama Administration. Trump’s reign of terror has simply been a precipitating factor.

What Abrams’ vision for the South teaches us is that, to be biblical about it, “the harvest is plentiful, but the laborers are few.” Now is the time to build infrastructure and pump money into Democratic organizing in each of these states, to cement a progressive power bloc, and to create the context for an inclusive, democratically powered national leadership.

The challenge of this moment is that campaigns of white racial backlash actually have a high rate of success. White backlash won the 19th century, as the end of Reconstruction cemented the rise of Jim Crow segregation. Though the Nixon-Reagan conservative gambit was less rowdy in its approach to racial repression, it was no less successful in having the final say in the 20th century (what with its assault on the welfare state, support of policing, and siphoning of American wealth away from the middle class). It is the preponderance of wins, indeed the presumption of them, that drove white Americans into the U.S. capitol on Wednesday with assurances that their side would be heard, their rights protected, their crimes overlooked.

But Georgia reminds us that white violence has never been the only story. Black resistance, and as Professor Koritha Mitchell reminds us, more tellingly, Black success, has been profoundly formative in providing integrity to any claims of American progress. As the country figures out how to recover from Trumpism, if it ever can, our greatest hope will be where it has always been – in the red clay dirt and audacious politics of Black folks and people of color in the U.S. South, our perpetual underdogs, who show up at just the right moment, and remind us that we can win, if we’re willing to fight. Attune your ears, folks. In the immortal words of Outkast, “the South got something to say.” 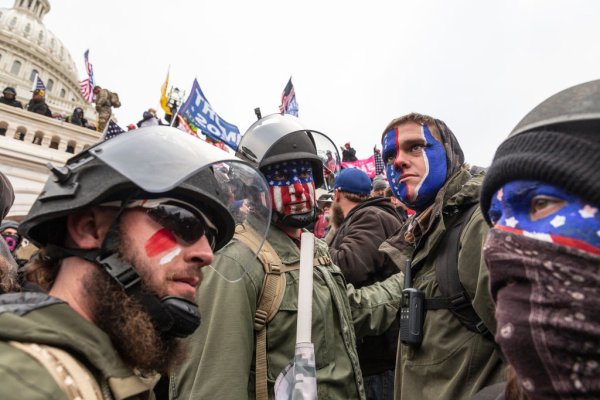 This Terror Threat Will Outlast Trump
Next Up: Editor's Pick