I FaceTimed With Terry McMillan About Friendship, Comfort Food and Her New Book

When Terry McMillan pops up on my screen, she tells me that she never uses FaceTime. I was nervous to meet the best-selling author who has been diving headfirst into the interiority of black friendships, romantic relationships and class structures for more than 30 years. I’d watched the film adaptation of her novel How Stella Got Her Groove Back with my friends. I’d studied the dialogue between groups of women in Waiting to Exhale while attempting to write my own. And I’d marveled at her effortless wit and passion in interviews with Oprah and on The Daily Show.

Through the phone screen, I tell McMillan that I never FaceTime either—and felt like I had to put on makeup to see her. She confesses she did the same, and we assure each other that we look great. We’d long planned to meet this way out of convenience, but the COVID-19 outbreak has us realizing that this will become a temporary norm.

McMillan, 68, is a lot like her characters in that she’s funny, comforting and still surprising. Talking to her feels like talking to an old friend, which is the same experience offered in her latest novel, It’s Not All Downhill From Here. Her 12th book follows grouchy and loving diabetic grandmother Loretha Curry and her group of 60-something friends together grappling with aging, relationships and loss. McMillan explores seasons of grieving and rebirth much like they occur off the page—humorously, with heart and whether we’d like them to or not.

What did you set out to accomplish in this novel that’s different from the others?

I don’t know if it’s different from the others. I always believe that characters have to go through something, so I put my characters in every book in situations where they are being tested on any level: emotionally, psychologically, spiritually, sexually, financially. They have to figure out how to get through it or over it—I’m not going to have them go around it. And the more they try to bullsh-t themselves, the harder it is.

Writing about groups of friends, you manage so many bodies, opinions and voices in the same room. How do you corral multiple bold personalities into a single scene?

I know my characters before I start to write. I do character profiles. You get a sense of how a character thinks, what their weaknesses are. I used to give them horoscopes and signs, as in I would give them traits of a Virgo. Sometimes it doesn’t carry out, but it’s a place to start. Loretha has an opinion about everybody. That’s what I love about black -people—they’ll tell you how they feel. To me, when you’re writing a character, you have to make sure each one has a spotlight. They have to be different; otherwise it’s just boring.

There’s a line in Lionel Shriver’s book We Need to Talk About Kevin where she says that there’s a moment where you meet your child for the first time—and it isn’t when they’re born. Is this something that your characters are experiencing?

Yes. A lot of us think we know our parents and children, and we don’t, and sometimes it takes something that makes one or both vulnerable or weak. There’s a place where you’re so vulnerable and you can’t run from it anymore, and that’s when we see ourselves in the mirror. You realize not only are the other people flawed, but you are too. That levels the playing field. And then you can love easier.

Girl, it’s the truth. We judge each other too harshly.

When did you know you were a grownup?

When I had to pay taxes. And when I didn’t have to ask my mother’s opinion.

A long time ago.

Loretha’s daughter struggles with mental illness. I know from my own experience that many black families feel that there are certain things, like therapy, that they “don’t do.” Was it a challenge to portray those complicated views?

Yes and no. I know about a lot of African Americans who were always afraid of it and didn’t realize they needed it—the alcohol, drugs and other stuff were not cutting it. Nowadays there are a lot more African Americans who do understand and respect the value of getting help. There’s no shame in it, and there shouldn’t be shame in wanting to address it. I’m a big advocate.

One of my favorite things in this novel is how much it focused on food. We find so many things in food—it’s power, it’s celebration, it’s comfort.

“Whatchyou cookin’ today?” “What you serving at the party?” “What are we gonna eat?” One or two of my characters are always thinking about their weight. Loretha almost cuts out her doctor for telling her what things she needs to give up. She’s like, “I can’t give up peach cobbler. Are you kidding me?” And there are a lot of books that you can read where nobody eats.

I have to ask what your comfort food is.

It used to be peach cobbler, but I gave up sugar. I still eat French fries, I just don’t eat them the way I used to eat them.

One of my favorite things is learning about writer diva behavior moments. Do you have any?

Oh honey, really cool, sexy velvet, like a yellowish green. Around the soles there are tiny rhinestones.

Before you were successful, did you have other novels that never saw the light of day?

No. Times have really changed. My first book, Mama, was published over 30 years ago, and back then I did all my own publicity. I found out they weren’t sending me on a book tour. Black writers didn’t get that. No way. They had a literary rat pack, who were all white—and they had tours. I found out I wasn’t going on one, and I was like, “What?” They said that to the wrong person. I was proactive and sold out of my first printing.

That’s hard to do now!

I set up my own tour. I got the names of the stores in the back of the dictionary. There was no social media, but it worked.

How do you work under deadlines?

I give it my best shot, but I’m not going to go crazy over it. My characters dictate the pace of the story. If my character’s heart is broken, my heart is broken. I can’t just wake up in the morning and go to a new chapter where she’s swinging on a swing or something. Sometimes people don’t understand that writing is an emotional journey and it’s taxing. It can be inspiring and encouraging, but sometimes, you have to take a break. If somebody died, I was at that funeral.

What’s something you’ve read more than once?

One Hundred Years of Solitude. But I like a writer named Ring Lardner. It was he who helped me understand voice. I don’t remember how I found his book Haircut & Other Stories, but I picked it up. He starts out with this guy talking, sitting in this chair; you don’t know who he is. The whole thing is him telling us about this town. By the end of the story, you know everything. He liberated me. He let me know you can tell a story in any way you can get away with it.

I love how you don’t remember how you found him. It’s like he found you.

Honey, when you’re 68 there’s a lot of stuff you don’t remember.

Do you and your friends have a group text?

If I was in your group text, and I said to your friends, “Describe Terry,” what would they say?

Reid is the author of the best-selling novel Such a Fun Age. 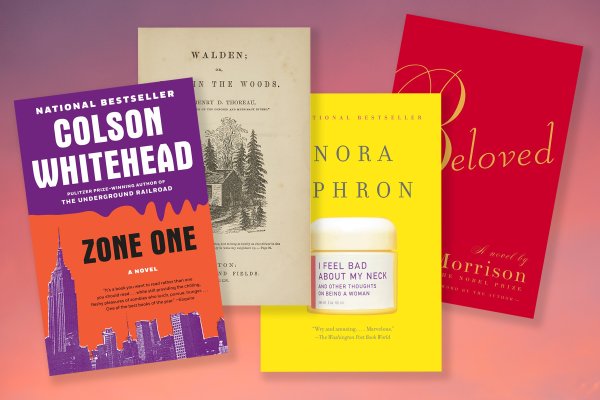 30 Books to Read During the COVID-19 Outbreak
Next Up: Editor's Pick