Bullet holes are seen in a van parked outside an Airbnb apartment rental along Suismon Street on April 17, 2022 in Pittsburgh. Firearms became the leading cause of death for American children and teenagers in 2020, according to researchers.
Jeff Swensen—Getty Images
By Josiah Bates

Firearms became the leading cause of death for American children and teenagers in 2020, according to researchers who analyzed Centers for Disease Control and Prevention (CDC) data.

This sad fact represents a major shift in risks for young people in the U.S. For over 60 years, car accidents were the leading cause of death for kids and teens. Car accidents are now number two, while drug overdoses are number three.

According to a research letter published recently in the New England Journal of Medicine, firearm-related deaths went up by 13% between 2019 and 2020. However, firearm deaths for people aged 1-19 increased by a massive 30%. In total there were 45,222 deaths as a result of gun violence in 2020, the research letter says. Around 10% of those deaths were children and teens. Within the numbers for adults, 65% of those gun deaths were the result of suicides, while 30% were from homicides. For teens and kids, those percentages are roughly flipped.

“This [increase] is probably linked in part to significant increases in firearm purchases during the COVID-19 pandemic but we don’t have the data systems to truly link those things,” Dr. Lois Lee, an Associate Professor of Pediatrics and Emergency Medicine at Harvard Medical School, who co-wrote a separate article on a related topic in the New England Journal of Medicine, tells TIME.

Read more: FBI Data Shows a Surge in Murders in 2020. That’s Not the Full Story

Though this breakdown did not have any racial demographic information, other studies show that Black and brown children are typically more exposed to gun violence than white children are.

“Although the new data are consistent with other evidence that firearm violence has increased during the COVID-19 pandemic, the reasons for the increase are unclear, and it cannot be assumed that firearm-related mortality will later revert to prepandemic levels,” the research letter says. “Regardless, the increasing firearm-related mortality reflects a longer-term trend and shows that we continue to fail to protect our youth from a preventable cause of death.”

The question of how to address that failure, of course, is something experts, community leaders and activists have long grappled with—even more so since the surge in gun violence that began at the start of the COVID-19 outbreak.

Meanwhile, motor vehicles have been getting safer for years. According to the article Lee published, the number of young Americans whose deaths are caused by cars started to decrease due to a concerted effort to improve that safety.

“The decrease in motor-vehicle-crash deaths in children and young adults is not unintentional. We have excellent data systems for motor vehicle injuries and deaths that we just don’t have for firearm deaths,” Lee says.

Read more: Why Gun-Violence Groups Aren’t Giving Joe Biden the Benefit of the Doubt Any More

To the researchers, that fact takes on double significance. The decline in car-related deaths is not just evidence that efforts to improve safety can make a big difference; it may also provide clues for ways to help reduce firearms deaths.

Lee and other experts believe a good place to start would be improving the data-collection process for gun deaths and injuries, following the model of data-collection around traffic accidents. This improvement could start with more federal oversight in tracking firearm deaths and injuries, and with addressing issues with how the FBI collects crime figures. A better baseline understanding of the situation, the idea goes, will allow researchers to see what actually works when it comes to helping prevent such deaths.

“Because we have excellent data systems for motor vehicle, and traffic injuries and deaths, we’ve seen improvements in those areas,” Lee says. “If we can clearly apply the same successful strategies to firearms then that may be a path forward to try and reverse this trend.” 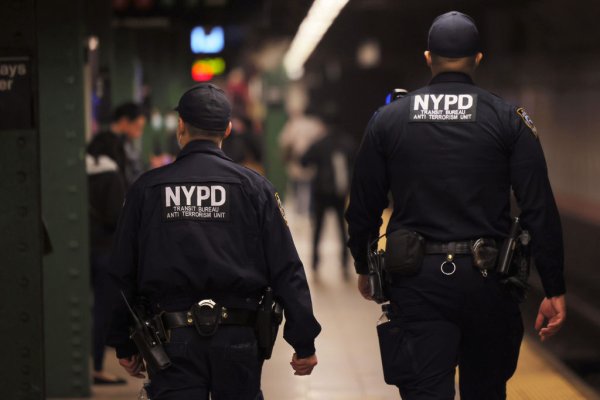 Shooting Fuels Debate Over Whether Police Make Subways Safer
Next Up: Editor's Pick