FBI Data Shows a Surge in Murders in 2020. That's Not the Full Story

Crime scene tape remains on a fence near the Rhodes funeral home in the Auburn Gresham neighborhood, where at least 15 people were shot during a funeral, in Chicago on July 22, 2020.
Scott Olson—Getty Images
By Josiah Bates

The Federal Bureau of Investigations (FBI) Sept. 27 release of its annual Uniform Crime Report (UCR) confirmed what many expected: the number of murders rose in 2020 across the U.S. According to the FBI’s data, the percentage of homicides increased 29% from 2019 to 2020. This was the largest single-year increase in murders since the Bureau began tracking such statistics in the 1960s. Across the country, the homicide rate rose from 5.1% (per 100,000 people) to 6.5%.

Overall, violent crime was up 5.6%. Property crimes dropped by 7.8%, however, and the number of robberies and burglaries reported also declined. And earlier this month, the FBI also released its annual hate crime data, which was at the highest level it’s been in 12 years.

The immediate response from some law enforcement advocates was to present the data as justification for increased policing amid an increasingly contentious climate as related to police reform; negotiations in Congress for the George Floyd Justice in Policing Act bill were confirmed to have broken down last week.

The vast majority of homicides tracked were committed with firearms, the UCR reports—76% in 2020, compared to 73% in 2019. Since the onset of the COVID-19 pandemic, shooting deaths have surged across the country. At the national level, the FBI’s data paints the broadest official picture of crime across the country—and the statistics are sobering.

But the data itself doesn’t tell the full story. Holes and inconsistencies in data collecting and reporting practices persist, and crime experts warn examining the data as a national issue fails to address some of the underlying problems.

“We know with absolute confidence that homicides are way up, but some of the other data about those homicides is less reliable,” Thomas Abt, a senior fellow at the Council on Criminal Justice tells TIME of the FBI’s data.

Crucially, police departments and agencies are not mandated to report their data to the FBI, explains Jacob Kaplan, a criminologist at Princeton University. “And even if they decide they want to report, they don’t have to report all 12 months of the year,” Kaplan continues. (Cities do not need to explain or even acknowledge why they decide not to report.)

Some 54 police agencies that cover populations of over 100,000 people didn’t report data for all 12 months of 2020. That’s roughly 1 out of every 10 agencies operating at such a level, and includes the police departments in Baltimore, Philadelphia, and Atlanta—which reported 11 months, 4 months, and 3 months’ worth of data respectively.

Philadelphia’s police department reported around 200 murders to the FBI, for example, when in reality the city tracked 499 murders—its highest since 1990.

Drilling down on the data reveals further shortcomings. Within its UCR dataset, the FBI provides what it describes as a “Supplementary Homicide Report,” which is supposed to provide more details about the murders, including the demographics of the victims and the alleged offenders. But this information is also voluntary and underreported, often leaving out important information about the homicides.

The Bureau’s data for cleared murder cases (those in which someone has been arrested) should be assessed similarly. In 2020, the national clearance rate for murders was 54%, compared to 61% in 2019, according to the FBI—but the FBI’s data does not distinguish between the timing of an arrest versus the incident that it relates to. (If someone was murdered in 2019, for example, and an arrest was made for that murder in 2020, that would count towards 2020’s clearance data.) Furthermore, the numbers don’t account for whether an arrested person was actually convicted.

“I think the basic argument that murders are up a lot is true, but I think looking at murders [across the U.S.] as a whole is too blunt. I think it’s important to look at who’s victimized,” Kaplan says.

As Abt sees it, the data doesn’t tell us much about how—let alone where, or why—concentrated the violence is. “There is evidence that suggests that this spike is being driven by what mostly drives homicides, which is community gun violence,” Abt says. “So there is not a new form of violence out there that emerged during the pandemic. It’s an intensification of the violence among these small groups of people in places that it was already happening.”

This “community gun violence” primarily impacts marginalized neighborhoods and inner-city communities. Often the victims and the perpetrators of shootings know each other, and cyclical violence continues as the fallout ripples.

But since such incidents don’t affect a much larger part of the country (specifically, majority-white suburban areas), broad discussions around gun crime don’t tend to take into account the hyperlocal aspect of the issue.

2020 marked the last year that the FBI collected data using the UCR’s Summary Reporting System (SRS). Moving forward, the Bureau began using the National Incident-Based Reporting System (NIBRS), which allows police departments to report more specific information about each crime and its victims—if they choose to do so.

According to the FBI, 63% of police departments have the new system—but most of the big city agencies don’t. And NIBRS is expensive at the city level. According to the Bureau of Statistics, it could cost up to $377,000 for departments to transition to the NIBRIS system, and another $53,500 a year for maintenance. For many law enforcement agencies, this is prohibitive. Many experts are concerned that, over the next few years, the discrepancy will mean the FBI’s collection process will be more flawed.

Even with the data issues, there is no disputing the number of homicides. Unlike other crimes that can be covered up or underreported, homicides produce a body—and that had to be accounted for in some capacity. But experts believe that national conversations about how to address rising murders have failed to examine what’s really happening.

“We have a real problem with homicides in the country among the most disadvantaged and disenfranchised communities. We need to approach this with a sense of urgency, empathy and accountability. We shouldn’t play politics with it,” Abt says. 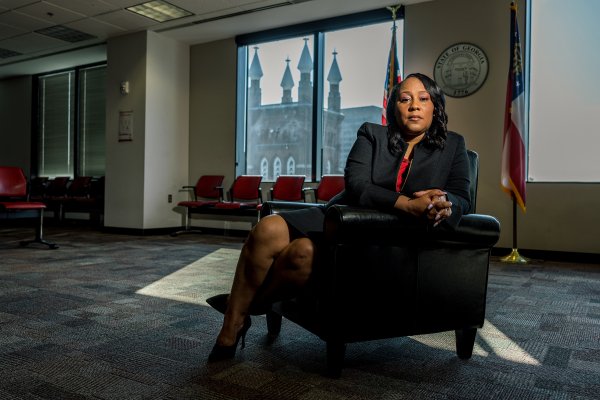 Fani Willis on the Atlanta Shootings and Donald Trump
Next Up: Editor's Pick