Putin Wants Revenge Not Just on Ukraine But on the U.S. and Its Allies

When Vladimir Putin declared war early Thursday morning, he did not set Ukraine as his ultimate target. The Russian leader focused instead on the U.S. and its allies, placing them at the center of a speech that set the night’s invasion in motion. It was the West, he said, that created the “fundamental threats” to Russia that prompted him to attack Ukraine, and it is the West, he said, that Russia would seek to humble in the ensuing war.

“All of the so-called Western bloc, which the U.S. formed in its image and likeness, all of it in its entirety, is what’s known as the empire of lies,” Putin said. After the fall of the Soviet Union, he added, the U.S. and its allies “tried to crush us, beat us down and finish us off… We remember that and will never forget it.”

Only a day earlier, there was still room to hope that Russia’s incursion into Ukraine was part of a local conflict, focused on border regions Putin had long described as historical possessions of Moscow that had unfairly been taken away. His hour-long address to the nation on Monday—which was, up to that point, the most aggressive of his 21 years in power—ended with a promise to recognize the independence of those separatist regions. The move was illegal, a blatant violation of Ukrainian sovereignty. But it did not in itself make a wider war seem inevitable.

Read More: Here’s What We Know So Far About Russia’s Assault on Ukraine

Indeed, when the West gave its response on Tuesday, imposing sanctions against a few Russian banks and halting the approval of a Russian gas pipeline to Germany, they wanted to leave room for diplomacy, for some negotiated settlement that would dissuade Putin from further escalations. “If Moscow’s approach changes, we remain, I remain, very much prepared to engage,” U.S. Secretary of State Antony Blinken told reporters on Tuesday.

A woman stands in a street as black smoke rises from a military airport in Chuguyev near Kharkiv on Feb. 24, 2022.
AFP via Getty Images

But by the time the missiles began to fall Thursday, hitting both military and civilian targets across the entirety of Ukraine, it was abundantly clear that Moscow’s approach would not change—that Putin intends this war as his revenge against the West, and the United States in particular.

Among the many threats he issued in his declaration of war, the most chilling was reserved not for Ukraine but for the “outside forces” who might come to its defense, a thinly veiled reference to Kyiv’s allies in the U.S. and Europe. Addressing them toward the end of his speech, Putin said: “Anyone who tries to get in our way, let alone tries to threaten us and our people, should know that Russia’s answer will be immediate, and it will lead to consequences of the sort that you have not faced ever in your history.”

Read More: How the West Can Stop Putin

The threat was grave in part because of its ambiguity. Putin did not specify what kind of support for Ukraine he might consider a threat to Russia in a time of war. Over the past year, the U.S. has provided hundreds of millions of dollars in military aid to help Ukraine defend itself, and President Joe Biden has made clear that this support would continue in the event of a Russian invasion.

Police and security personnel inspect the remains of a shell in a street in Kyiv on Feb. 24, 2022.
ARIS MESSINIS/AFP via Getty Images

As that invasion started, the Ukrainian leadership called on the West to go much further in its support. President Volodymyr Zelensky said on Thursday morning in Kyiv that he had spoken with President Biden and several of Europe’s leading statesmen with the aim of building what he called an “anti-Putin coalition.” Among the aims of this coalition, he said in a statement, would be to provide Ukraine with defense and financial support and, as he put it, to “close the airspace” over his country to halt Russian air attacks.

But would Putin treat that as an act of Western aggression? His speech made it difficult to tell for sure, and that may have been the point. In starting this war, Putin has presented the U.S. and its allies with a painful dilemma. They can either break their promises of support for Ukraine and abandon the country to Russia, or they can risk getting pulled into a war with a nuclear superpower intent on their humiliation.

For Putin, that may also be part of the point. Most of his half-hour speech on Thursday morning in Moscow amounted to a list of his many grudges against the West, from the collapse of the Soviet Union to the wars in Libya, Syria, Iraq and elsewhere. “One gets that sense that practically everywhere, in many regions of the world where the West comes to establish its order, they end up turning into bloody wounds that cannot heal, boils of international terrorism and extremism.”

These were not the words of an aggressor calling on the West to mind its business while he settles a score with his neighbor. This was a war cry meant for the ears of all Western leaders. With his bombs now falling on Ukraine, Putin has forced them to listen, and he is daring them to respond. 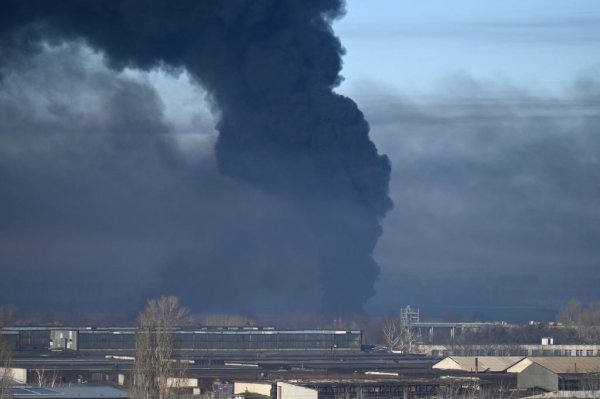 Russia's Assault on Ukraine Poses Huge Risks for Europe
Next Up: Editor's Pick