On Feb. 25, the White House confirmed that President Joe Biden is nominating Ketanji Brown Jackson to the U.S. Supreme Court Justice. Jackson, who currently serves as a judge on the U.S. Court of Appeals for the District of Columbia Circuit, and who the White House described as an “exceptionally qualified” nominee in a statement, is poised to become the first Black woman to serve on the nation’s highest court.

Though Black women are underrepresented as judges in the nation’s court system, Jackson’s nomination marks the latest milestone in a history of Black women lawyers that dates back 150 years. For many, civil rights was a major motivation for practicing law. With this in mind, TIME asked historians what women paved the way for this moment.

Read More: What Ketanji Brown Jackson Could Bring to the Supreme Court

The history, they say, starts with Charlotte Ray, the first known Black woman lawyer in 1872, both in terms of earning a degree and getting a license to practice; Ray earned a law degree from Howard University and passed the District of Columbia’s bar exam. “She soon opened her own law firm, but because of segregation and pervasive gender prejudice she could not attract enough clients to maintain her practice,” according to Henry Louis Gates’ Life Upon These Shores: Looking at African American History, 1513-2008. Ray ended up moving to New York City and getting involved with the women’s suffrage movement and the National Association of Colored Women.

Lutie Lytle faced the same obstacles. The first Black female law professor taught for a year at Central Tennessee University in Nashville from 1898 to 1899, but also later moved to New York to work for suffrage activists because she couldn’t find any clients as an attorney in the South, according to Omar H. Ali’s In the Lion’s Mouth: Black Populism in the New South, 1886-1900. “The anchor of my race is grounded on the Constitution,” Lytle said in an 1897 interview. “It is the certificate of our liberty and our equality before the law.”

Later in the 20th century, when men went off to fight in World War II, doors for Black women lawyers opened. “Spaces had opened up at law schools because of World War II,” says Virginia L. Summey, historian and author of The Life of Elreta Melton Alexander: Activism within the Courts.

One of those beneficiaries was Elreta Melton Alexander, the first Black woman to graduate from Columbia Law School in 1945. She practiced in her hometown of Greensboro, North Carolina, and her most well-known case came in 1964, when she defended four Black men accused of raping a white woman. Even though she lost the case, she tried to use the trial to call attention to race-based jury selection procedures which persist in the U.S. today. Eventually, she became the first Black woman in the country to be an elected district court judge in 1968. (In 1974, Alexander ran for Chief Justice of North Carolina’s Supreme Court, but lost out to a fire extinguisher salesman with no legal expertise—in response, the state amended its Constitution to say candidates had to have a law degree.)

Read More: Black Women Have Consistently Been Trailblazers for Social Change. Why Are They So Often Relegated to the Margins?

Another noteworthy predecessor to today’s Supreme Court nominee is Jane Bolin, who was the first Black woman to become a judge in 1939, presiding over New York City’s Domestic Relations Court—which was renamed Family Court in 1962—until 1978. “Bolin often administered a brand of justice that recognized the racism and structural inequalities that Black youth faced, and she joined a handful of Black reformers who demanded that whites treat them more fairly,” as the historian Carl Suddler described her tenure in Presumed Criminal: Black Youth and the Justice System in Postwar New York.

“Black women lawyers were so unusual and so stereotyped that they [had to] exude competency,” Kenneth Mack, author of Representing the Race: The Creation of the Civil Rights Lawyer. “Some of the stereotypes involved sexualization, as well as perception that they were not smart enough. So, I would say that they held themselves to higher standards than did the other lawyers with whom they interacted.”

And figures like Bolin served as inspiration for the next generation of women lawyers.

Constance Baker Motley was one of those women. Motley worked on school desegregation cases in the mid-20th century, including Brown v. Board of Education (1954), alongside future U.S. Supreme Court justice Thurgood Marshall, as the only woman on the NAACP’s legal defense team. She also defended James Meredith in his successful suit to gain admission to the University of Mississippi (1962) as its first Black student. The first Black woman known to argue at the U.S. Supreme Court, Motley argued 10 cases—and won nine of them. In 1966, she became the first Black female federal judge, serving on the United States District Court for the Southern District of New York for the next 39 years until her death in 2005.

Among the cases she presided over was Blank v. Sullivan and Cromwell, which opened up more spots at law firms to women. Vice President Kamala Harris, a former California Attorney General, said in 2018 that Motley, “inspired me from a young age to fight for the voiceless and for justice.”

One of Harris’s predecessors, Pauli Murray, was the first Black woman Attorney General of California. Murray is best known for her 1965 article “Jane Crow and the Law” on the laws that restricted what women could do and how the restrictions differed based on race. She was also a co-founder of the National Organization for Women in 1966. The late U.S. Supreme Court justice Ruth Bader Ginsburg would often credit Murray for shaping her work on sex discrimination in the 1970s.

“All of these women, from Jane Bolin to Pauli Murray to Constance Baker Motley experienced discrimination and exclusion themselves,” says Tomiko Brown-Nagin, author of Civil Rights Queen: Constance Baker Motley and the Struggle for Equality, “and it’s because of that and the broader context in which the NAACP started to litigate cases attacking discrimination in education that these women themselves turned to the law and developed a passion for equal protection under law. Even as they continue to be victims of discrimination, they fought for others, for equality.”

On the significance of a Black woman Supreme Court justice in 2022, Mack says it makes a statement about U.S. values. As he puts it, “At a time where what Americans should be is very much under assault, and being questioned. There’s racial division. Extremist racial views are on the rise. A Black woman on the Supreme Court would be a symbol of what America is and what America should be.” 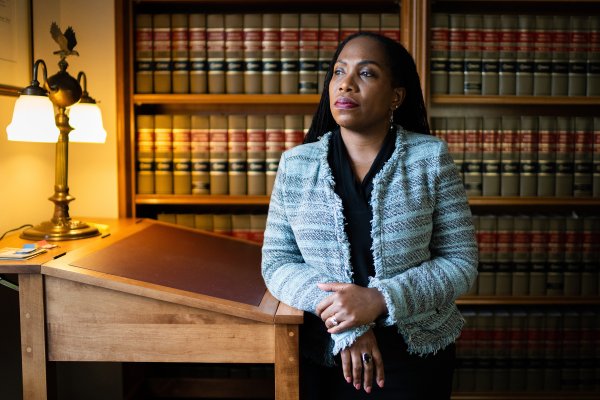 Biden Nominates Ketanji Brown Jackson to SCOTUS. What Happens Next?
Next Up: Editor's Pick