Linda Brown was a third grader in Topeka, Kans., when her father sued so she could attend an all-white school. The case — eventually rolled together with four similar cases — went all the way to the U.S. Supreme Court, which ruled unanimously in the landmark 1954 case Brown v. Board of Education that state-sponsored segregation of public schools was unconstitutional.

After news broke on Monday that Brown had died at 75, TIME spoke to another person who became famous for being allowed to attend an all-white school after intervention from the Supreme Court: James Meredith, the 84-year-old civil rights activist in Jackson, Miss. who became the first African American to attend the University of Mississippi in 1962 and also led the controversial March Against Fear through the state in 1966. Below, he reflects on the legacy of Linda Brown and real meaning of the case that bears her family’s name.

When I was stationed at an air force base in the Topeka area, I knew of the Browns, simply because I was one of the first blacks ever on that base and everybody who was black in Topeka knew everyone else who was black in Topeka. But I did not know them personally. After Linda Brown’s case was handed down in 1954, my commander, who identified as an aristocrat from the Mississippi Delta, encouraged me to keep raising hell at the base until they made everything equal.

But I only really began to understand what the case meant when I was a first-year student at Columbia Law School in 1965. The dean, William Warren, told me that the reason they were letting the best minds in the black race come in was so they could have leaders who could learn stuff like constitutional law. Then they would learn that even when you won a constitutional case, you didn’t gain anything. With the Brown decision in 1954, they said, “O.K. we’ll rule that it’s wrong for blacks not to be able to go to white schools, but don’t do nothing, keep it like it is, until we give you instructions on how to proceed.” And then that instruction was to proceed “with all deliberate speed.” Dean Warren said what that meant was never. That’s why [Mississippi Governor] Ross Barnett said never when he blocked me at the door [of the University of Mississippi in 1962]. Because “all deliberate speed” meant never to people in the know. And it was still never in 1965 when Dean Warren told me that.

The Brown decision did not deliver what it promised. There’s no doubt that Mississippi and America and the world is different because of the Brown decision, no question in my mind. But there’s also no doubt in my mind that it never did deliver what everybody thinks it did. It’s time for us to start dealing with the reality because America is in danger —we are projecting the lie and avoiding the truth. The lie, meaning that the black-white issue has been solved, that we have integration. We don’t even have desegregation.

But here I’ll tell you what is good: In 1954, we could not use restroom facilities in a public building; we could not go to a restaurant and buy a sandwich. I guarantee you that life is better now that we can do all of those things, but as far as the black-white issue is concerned — particularly the important part, education, where you can live and what you have to pay to live — the only way to change that is to provide an education route, so you can move up in the capitalist structure. And that’s become less and less, not more and more.

I’m 84, and it gets hard for me to contain myself.

As told to Olivia B. Waxman

Correction: The original version of this story included a photograph of a person other than Linda Brown. It has been updated. 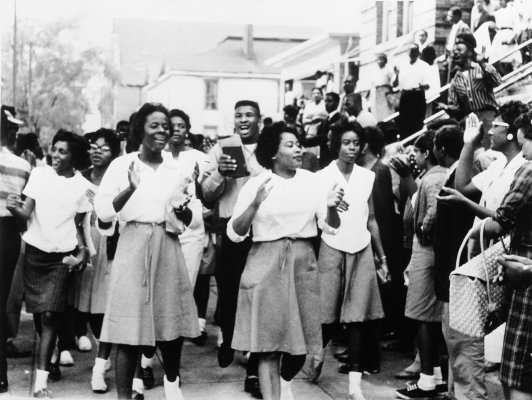 Student Walkouts Have Changed American History Before. Here's How
Next Up: Editor's Pick