This week, the Senate Judiciary Committee heard from Amy Coney Barrett, President Trump’s nominee to fill the Supreme Court seat of the late justice Ruth Bader Ginsburg, who died on Sept. 18 at 87. In the weeks since Ginsburg’s death, much attention has been paid to her work before she joined the bench, as a groundbreaking litigator of gender-equality cases in the 1970s—and to the question of what Barrett’s approach to such cases might be.

While Ginsburg was unquestionably a pioneer in the realm of sex-discrimination, she also tried to set the record straight on the other pioneer on whose shoulders she stood.

In this never-before-seen interview, conducted by documentary filmmakers Margo Guernsey and Llewellyn Smith in 2017, Ginsburg credits lawyer and activist Pauli Murray for inspiring an amicus brief she wrote for the historic 1971 Supreme Court case Reed v. Reed, which was the first time the nation’s highest court recognized women as victims of sex discrimination.

That case centered on the death of 19-year-old Idahoan Richard Reed, who apparently shot himself in his father’s house with one of his father’s rifles. Given that the tragedy had occurred in her ex-husband’s home, his mother Sally Reed filed to be the executor of her son’s estate. The job, however, was set to go to the father, as Idaho law said that if a man and a woman were both equally qualified to execute an estate, “males must be preferred to females.” Ginsburg, then a law professor, wrote an amicus brief with the American Civil Liberties Union (ACLU), arguing that the Idaho law denied Sally Reed the “equal protection of the laws” that she was promised by the 14th Amendment.

And on Nov. 22, 1971, the Supreme Court agreed. The court ruled for the first time that a sex-based classification law was unconstitutional because it violated the 14th Amendment’s Equal Protection Clause, which says, no state shall “deprive…any person within its jurisdiction the equal protection of the laws.”

That idea, Ginsburg said, came directly from the mind of Pauli Murray, who was listed as an honorary writer of the brief.

“Pauli had the idea that we should interpret the text literally; it said ‘any person’ not ‘any male person,'” Ginsburg told Guernsey and Smith. Among the Murray writings cited in the brief was a 1965 article “Jane Crow and the Law” which detailed the American laws that restricted what women could do. Such restrictions differed from those applied to race, Ginsburg explained, in that they were “rationalized as favors for the ladies”; nevertheless, the logic was the same. Working well before the coining of the term intersectionality—the idea that overlapping factors such as race, sex, gender, class and immigration status must be viewed collectively to fully understand a person’s identity—Murray had outlined the parallels between sex discrimination and race discrimination, setting the stage for the former to be recognized as just as unconstitutional as the latter.

“We knew when we were writing that brief that we were standing on her shoulders,” Ginsburg said. “We owe so much to her courage, to her willingness to speak out when society was not prepared to listen.”

The spring following the Reed v. Reed decision, Ginsburg founded the ACLU’s Women’s Rights Project. In her work there, she went on to write roughly two dozen other amicus briefs that solidified her reputation as the “Thurgood Marshall of the women’s movement.” But in the years that followed, especially after Murray’s death in 1985, Ginsburg would make sure Murray’s role in the history that created that reputation was remembered too, talking her up in countless lectures and interviews.

In fact, Ginsburg was so eager to do so that she surprised independent documentarians Guernsey and Smith when she agreed to speak to them while they were conducting research about Murray—who, after serving as California’s first Black female deputy attorney general and the first Black woman associate at the white shoe firm Paul Weiss, went on to become a co-founder of the National Organization for Women in 1966 and the first Black female Episcopal priest in 1977.

The filmmakers shared this footage with TIME in the aftermath of Ginsburg’s death to help people better understand the late Supreme Court justice and her evolution as a legal theorist, and to continue to do what Ginsburg was aiming for: “to give credit where credit is due,” says Guernsey, “[to] one of the premier legal minds of the 20th century who is often not credited.” 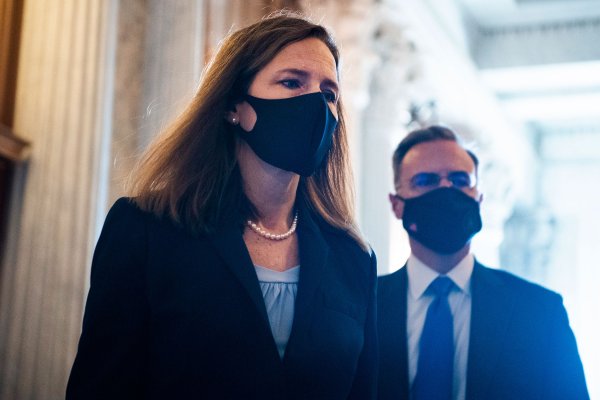 Amy Barrett had COVID-19 in Recent Months
Next Up: Editor's Pick