Russian President Vladimir Putin attends a friendly ice hockey match on December 29, 2021 in Saint Petersburg , Russia. Putin and Lukashenko with other leaders of post-Soviet states gathered in St.Petersburg to mark the 30th anniversary of the Commowealth of Independent States and took part in a joint ice hockey match.
Mikhail Svetlov-Getty Images)
Ideas
By James Stavridis
Admiral Stavridis (Ret.), a TIME Contributing Editor, was the 16th Supreme Allied Commander at NATO and is an Operating Executive at The Carlyle Group. His new book is 2034: A Novel of the Next World War. His previous nonfiction book was Sailing True North: Ten Admirals and the Voyage of Character

For the past several months, Ukraine and its western partners have been watching Russia methodically build up a powerful force of over 100,000 soldiers on their shared border. While he claims not to intend an invasion, President Vladimir Putin has several objectives. He wants to appear strong and decisive to his domestic base; divide the U.S. and NATO over the response to a potential strike; impress his allies, especially President Xi Jinping of China; prevent Ukraine from joining NATO and the E.U., tying them Russia’s sphere of influence; and make the Biden administration appear weak and indecisive in the run-up to the 2021 midterms—especially after the U.S. failed to support former ally Afghanistan.

For the U.S., NATO, and the world’s democracies, this is a challenging moment. Above all, the Biden Administration wants to show that it can be relied upon to support a fellow democracy. Ukraine, while not a formal NATO member, has been a loyal partner to NATO and sent troops on NATO missions—and they desperately want to join the Alliance. Putin insists that Russia be afforded a veto of any further NATO expansion, and also wants military troops removed from former members of the Cold War Warsaw Pact—which includes many current allies like Poland, Romania, Bulgaria, Hungary and others. NATO cannot afford to give him such sway.

This is a significant confrontation, and the stakes are high. How should we think about the challenges on the edge of Europe, and above all what will Putin do next?

When I was Supreme Allied Commander at NATO, I spent a fair amount of time looking at Russian military options around the periphery of Europe. I had taken command of NATO military operations after Moscow’s invasion of Georgia in 2008, which resulted in the conquest of two provinces of that small, western aligned democracy. It was a straight forward offensive attack against the tiny nation of under four million—Russian tanks, troops, bombs, fighter jet, infantry, and artillery strikes provided the heavy punch.

A few years later, Putin decided to invade a much-larger neighbor, Ukraine. In that case, he decided to use what has come to be known as “hybrid warfare,” a witches’ brew of non-uniformed soldiers (the so-called “little green men,”), high end special forces, sophisticated offensive cyber against command centers and the electric grid, social media disinformation, and amphibious operations. These relatively unconventional tactics were combined with more traditional elements—hence the sobriquet “hybrid”—with effect in 2014.

Here we are eight years later wondering what approach Putin will embrace if he does decide to invade Ukraine in the new year, perhaps as soon as late January as the ground freezes hard to support heavy armor and transport.

Putin and his generals are tactically innovative, and have a variety of options in front of them. They are a blooded army with commanders experienced in a wide variety of combat scenarios, most recently in the ongoing civil war in Syria and of course during their engagement in Ukraine itself. The combat in Ukraine continues both overtly (in occupied Crimea) and covertly (supporting a virulent separatist movement in the Donbass region in the southeast of the country, where 15,000 have been killed over the past decade).

In 2022, the first option they will consider would be simple: a highly traditional blitzkrieg, much as was used against Georgia. This will require not only the 100,000 troops currently on the border, but an additional 75,000 who would “fall in” on prepositioned equipment that the U.S. showed the world in intelligence photos around Christmas.

This approach would include heavy air strikes against Ukrainian command and control, artillery bombardment, strikes from naval vessels in the Black Sea, and surface-to-surface missiles. All of this would be accompanied by offensive military cyberattacks against Ukrainian defensive weapons systems, communication capabilities, and possibly against parts of the nation’s electric grid.

Helicopters would move shock troops forward fast, probably behind Ukrainian front lines. They would confuse and destabilize Ukrainian logistics and higher command authorities. Heavy infantry units would then cross the weakened border, and thrust deep into Ukraine, probably as far as the Dnieper River. The ethnically Russian southeast of Ukraine (especially Donetsk, Luhansk, and Mariupol) would be consolidated, creating a “land bridge” connecting Russia with Crimea, and grabbing another significant check of Black Sea waterfront.

At that point, Putin would pause, assess the situation, and decide whether to push forward to Kiev in order to effect regime change before pulling his troops back. He would likely go on to actually annex the southeast of the country, support a puppet regime in Kiev, and wait for the response of the west. This is the riskiest but also the highest payoff for the Kremlin, and is probably a 20% probability—not likely, but uncomfortable to contemplate.

A rally "Say no to Putin" is held in Kiev, Ukraine on January 9, 2021. Ukrainian nationalists are displeased with the interference of Russian President Vladimir Putin in the internal affairs of Kazakhstan. Russia sent about 3,000 troops to Kazakhstan to quell protests.
Anadolu Agency-Getty Images

A second option for the Kremlin would be to try and create a layer of deniability by using a strictly unconventional approach. This would be more akin to what he did in 2014 in Ukraine, and would include a massive cyberattack on the Ukrainian society, knocking out everything from gas stations to ATMs to rail and air systems. Using covert Russian forces already implanted in the Donbass region, he could unleash attacks across Ukraine—car bombs, mysterious criminal activities, assassination of military and civilian leaders. Social media would be central, discrediting the current government, documenting fictitious “massacres” of ethnic Russians in Ukrainian dominated sectors, and undermining confidence of the society as a whole.

When western critics decried his actions, he would call it “fake news” and the Ukrainian version of the “big lie,” saying that Russian engagement is key to maintaining stability on the shared border. This is a hyped-up version of what he is already doing, and increasing these tactics would make it harder for NATO to consider Ukraine for membership, one of his key objectives. It would also generate public support within Russia for his actions (protecting “Russian patriots” living in Ukraine) without the costs of a full-scale invasion. This seems a more likely approach than an all-out invasion, and poses less risk to Moscow. This is roughly a 40% probability and the likely approach Putin will take if talks in mid-January do not accomplish his objectives.

Finally, he is hoping he can achieve what he wants via the talks which will unfold this week—U.S.-Russia on 10 Jan., Russia-NATO on 12 Jan., and at the Organization for Security and Cooperation in Europe on 13 Jan. Putin wants assurances that Ukraine will never be allowed to join NATO; that NATO nations along the long Russian / NATO border will never be permitted to host significant NATO military forces; and that sanctions imposed on him over the 2014 invasion, the Skirpal nerve attacks in the U.K., and the attempted assassination of his political opponent Alexander Navalny will be lifted.

While the chances of achieving those sweeping objectives at the negotiating table appear low-to-impossible, he might be willing to settle for something less than everything he is demanding. His minimum is probably a federalist structure in Ukraine that gives real autonomy to the Russian speaking southeast of the country; at least a tacit acceptance of the annexation of Crimea; an under-the-table recognition that Ukraine (and Georgia) will not join NATO; and some sanctions relief that would increase over time.

If the west gives him some of what he seeks, Putin may be willing to put both the massive invasion and the amped up hybrid approach on hold, at least for the moment. He also has his eye on elections in the U.S., both this fall and more importantly in 2024. The idea of demonstrating weakness on the part of the Biden team is very appealing to him, and he may judge that he should hold back until that part of his strategy can have maximal effect—thus improving the changes he will accept some kind of negotiated outcome this round. Thus this option comes in around 40% as well, about equal to the chances of the hybrid approach.

The U.S. and NATO should do all we can to use diplomacy to defuse the situation and avoid giving Putin an easy and obvious win. That means ensuring the west in general and NATO in particular speak with one voice on the level and lethality of economic sanctions that would be applied if Putin crosses another sovereign border in anger. We should also use the next month or two to rush defensive but lethal weapons to Ukraine, which would serve as a further deterrent. Nord Stream 2 represents real leverage at this point, and looking at some sanctions relief could be possible—but not while Russia effectively has a dagger at the throat of Ukraine.

As talks unfold the Biden administration is signaling a willingness to provide some strategic flexibility. This could include reducing the capability of NATO anti-ballistic missile systems in Poland and Romania; discussing balancing troop levels between Russia and the west in NATO nations on Russia’s border; and reducing military exercises on both sides. But there is a great deal of animosity between the sides.

Putin and his generals like maintaining the west off-balance, something they have done to good effect over the past decade. One thing I learned studying their approach to warfare at the SACEUR is how much they like to preserve optionality. Count on the Russian President to threaten the massive attack, see what he can get at the table in January that can go in his pocket, but be back with the hybrid approach as the year goes along. Unfortunately, this is a long-simmering crisis that will come closer and closer to a full boil at different times as the year unfolds. 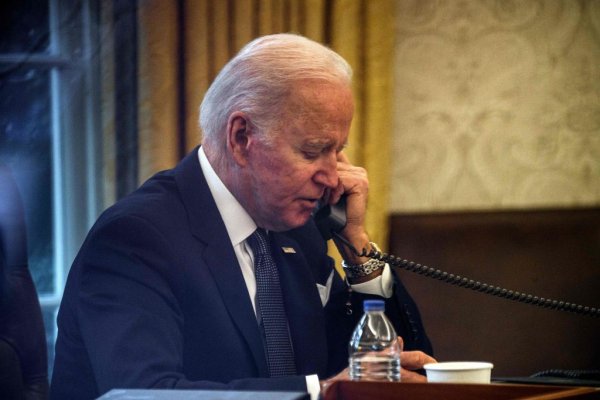 Biden Reaffirms Commitment in Call With Ukraine's President
Next Up: Editor's Pick