What Vladimir Putin Is Up To in Ukraine

Russian President Vladimir Putin listens to the head of Russian Federal Taxation Service Daniil Yegorov during their meeting in Moscow, Russia, Monday, Nov. 22, 2021.
Mikhail Metzel, Sputnik-AP)
Ideas
By Ian Bremmer
Bremmer is a foreign affairs columnist and editor-at-large at TIME. He is the president of Eurasia Group, a political-risk consultancy, and GZERO Media, a company dedicated to providing intelligent and engaging coverage of international affairs. He teaches applied geopolitics at Columbia University’s School of International and Public Affairs and his most recent book is The Power of Crisis

In recent weeks, Russia has advanced more than 100,000 soldiers to its border with Ukraine. The Ukrainian government, fearing an attack, has called on Europe and the U.S. for help. A Kremlin spokesperson says Russia poses no threat to anyone, but its 2014 invasion of Crimea and its ongoing material support for separatist rebels in Ukraine’s Donbas region (along with related denials of the same) have European and U.S. officials on alert.

E.U. chief Ursula von der Leyen insists the E.U. and U.S. “fully support the territorial integrity of Ukraine,” and together they’re publicly discussing retaliatory steps, mainly sanctions, if Russia crosses the border. U.S. Secretary of State Antony Blinken has said that a Russian incursion would be a “serious mistake,” and the U.S. has reportedly shipped some 80 tons of ammunition to Ukraine to support Kyiv.

What’s Vladimir Putin up to? In recent years, the Russian President has fully embraced Cold War–style, anti-Western words and actions, at least in part as a means of boosting his sagging approval ratings. A poll published in October by Moscow’s Levada Center found that Russian trust in Putin had fallen to 53%, its lowest level since 2012. History shows that picking fights with Ukraine can help with that.

Russian troops, Putin claims, are responding to Western provocations in the Black Sea, where NATO has recently staged unannounced military exercises. Why should Russia, he asks, ignore the hostile presence of U.S. and European warships and fighter planes so near Russia’s coastline? It’s also possible that Putin is signaling to Ukraine’s President Volodymyr Zelensky not to try to boost his own slumping ratings by becoming more militarily aggressive with the Donbas rebels in coming months.

Despite all this, a Russian invasion of Ukraine remains unlikely. Seven years ago, when Putin grabbed Crimea in retaliation for the political upheaval in Kyiv that forced Ukraine’s pro-Russia President to flee the country, his troops were entering the only part of Ukraine where a majority of citizens were ethnic Russians. That guaranteed a mostly friendly reception. At the time, the Kremlin also had the element of surprise. The subsequent Russian backing for Ukraine’s Donbas separatists likewise took place on mostly friendly territory. Today, Putin’s aggressions have permanently poisoned the attitudes of tens of millions of Ukrainians toward Moscow.

That’s why any Russian advance into new Ukrainian territory would prove extremely costly for Russia. Ukraine can’t defeat Russia on the ground, and NATO wouldn’t join the fighting, but heavy Russian casualties and the financial costs of holding hostile territory are too politically expensive for a Russian President who isn’t as popular as he used to be. In fact, another Levada poll has found that though Russians tend to blame the West for trouble in Ukraine, they don’t think a “full-scale war” with Ukraine would go well for Putin’s domestic standing. All that said, Ukraine is in no position to ignore the sudden expanded presence of Russian troops along its border, and U.S. and European officials know that any less than forceful statement of their support can make hostile Russian action more likely. The risk of war remains low, but no one will relax until those Russian soldiers step back. 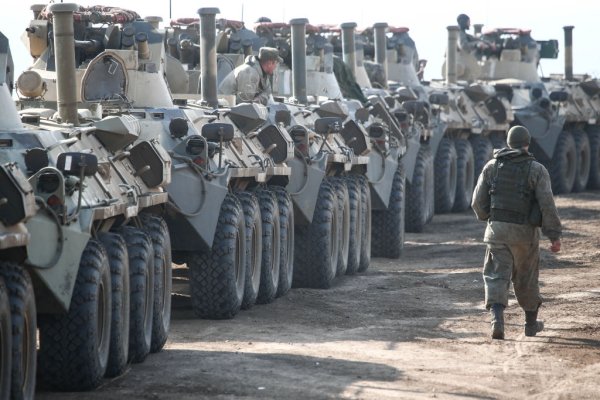 U.S. and Allies Weigh Reprisals If Russia Invades Ukraine
Next Up: Editor's Pick