Breaking Down the Complicated Relationship Between Russia and NATO

When the U.S., Canada and 10 western European nations came together in 1949 to form the North Atlantic Treaty Organization, they had a clear goal. “Keep the Soviet Union out, the Americans in, and the Germans down,” said Lord Hastings Lionel Ismay, NATO’s first Secretary General. The military alliance was intended to rebuild Europe from the rubble of World War II and to act as a buffer against Soviet aggression.

But the collapse of the Soviet Union made NATO’s purpose less clear. In fact, in 1990, as the Cold War drew to a close, President Mikhail Gorbachev proposed the Soviet Union join NATO. At the time, Gorbachev was negotiating German reunification with the then U.S. Secretary of State James Baker. “You say that NATO is not directed against us,” he said, referring to the rival Warsaw Pact, an alliance between the Soviet Union and Communist countries in Eastern Europe, “that it is simply a security structure that is adapting to new realities. Therefore, we propose to join NATO.”

Baker reportedly dismissed the proposal as a “dream” but it has been floated several times since. Giving Russia membership would have required NATO, which turned 70 on Thursday, to fundamentally redefine itself. Nevertheless, in the three decades since the end of the Cold War and the collapse of the Soviet Union, NATO has had to find a new raison d’être.

As NATO foreign ministers met in Washington to mark the anniversary, they faced questions about its future. Here’s what to know about the relationship between Russia and NATO.

After the Cold War, what happened between Russia and NATO?

In 1991 Boris Yeltsin, the first president of the new Russian state, wrote to NATO, reiterating Gorbachev’s proposal. He echoed calls made by former Warsaw Pact countries like Hungary to join the Western alliance, and called NATO membership a “long-term political aim” of Russia.

After the collapse of the Soviet Union though, NATO began to redefine its purpose. Vesko Garcevic, a former Montenegro ambassador to NATO, says the new mission became to ensure the democratization of newly post-communist republics, which the alliance considered crucial to guaranteeing a stable Europe. After joining NATO, most of the countries then became E.U. members. “It was no longer not just about security. It was also political. That’s why the alliance has survived for so many years,” he says.

In 1994, Russia officially signed up to the NATO Partnership for Peace, a program aimed at building trust between NATO and other European and former Soviet countries. President Bill Clinton described it in January 1994 as a “track that will lead to NATO membership.”

Russian President Vladimir Putin told filmmaker Oliver Stone in a 2017 interview that he discussed the option with Clinton during the American president’s visit to Moscow in 2000. And when then-Danish Prime Minister Anders Fogh Rasmussen met with Putin in the early 2000s, he says he got the impression Russia was pro-Western and open to joining the transatlantic alliance.

Russian President Vladimir Putin talks during a press conference after the NATO-Russia Council meeting at the Parliament in Bucharest, Romania, on April 4, 2008.
Natalia Kolesnikov - AFP/Getty Images

So why isn’t Russia a member of NATO?

Despite Russia signaling its interest to join NATO, there has since been a lot of tension between them. “Once Russia can show it is upholding democracy and human rights, NATO can seriously consider its membership,”says Rasmussen, the former Danish Prime Minister who served as NATO Secretary General from 2009 to 2014. In the meantime, he adds “we tried to build strong cooperation with Moscow.” He cites the 2002 Russia-NATO council, a development of the 1997 Act, which serves as a mechanism for cooperation, consensus building and joint-decision making. “We do share common interests. We cooperated on counter terrorism in Afghanistan, counter narcotics and counter piracy,” says Rasmussen.

But Russia has repeatedly made a request that NATO has rejected: to refuse to accept new members in its “backyard” (or neighboring countries), says Rasmussen. “It wasn’t for the West or Moscow to decide whether those countries should join NATO. Each and every country has the right to decide its alliance and affiliation,” says the former NATO ambassador Garcevic.

By 1999, when it became clear that NATO and Russia had irreconcilable views over the future of the post-Soviet republics, the alliance “turned into a security challenge” for the Kremlin, according to Garcevic. It was a “critical turning point,”he says, noting that Russia started to become more anti-Western. As the years went on, nostalgia for the Soviet Union became more apparent. In 2005, Putin famously said the breakup of the Soviet Union “was the greatest geopolitical catastrophe of the century.”

Eventually, actions rather than words made it clear that Russia saw NATO as an adversary. In April 2008, NATO promised membership to Georgia and Ukraine at the Bucharest summit, but a membership plan was not offered. In August 2008, Russia launched a five day invasion of Georgia on the pretext of defending the breakaway regions of South Ossetia and Abkhazia. Eight hundred people were killed. South Ossetia and Abkhazia later declared their independence; Russia is one of the few countries in the world to recognize this.

“We sent the wrong signal from Bucharest,” says Rasmussen, who believes an action plan for Georgia’s membership could have deterred the invasion. “Putin interpreted our actions as a lack of resolve and a lack of will to act if he tested that resolve.”

Putin continued to test it. In 2014, he sent Russian troops to annex Crimea from Ukraine and sparked the ongoing conflict in the country’s east that has killed more than 13,000 people.

Former Kremlin adviser Sergei Karaganov tells TIME that history could have looked different. Not allowing Russia to join NATO was “one of the worst mistakes in political history,” says Karaganov. “It automatically put Russia and the West on a collision course, eventually sacrificing Ukraine.”

How does Russia feel about NATO today?

Tensions skyrocketed between NATO and Russia after the 2014 annexation. “Now, countries bordering Russia, including the Baltics, are really fearful,” Karaganov says. If they had not joined NATO and stayed “neutral” they would have been “much more comfortable.”

Since 2014, Russia and NATO’s relations have reverted back to their Cold War hostility. But today the threat Russia poses is much more complex, says Rasmussen, the ex-NATO Secretary General. The security environment has transformed from a “predictable, bipolar confrontation” to a “multilayered, non-transparent picture of threats and challenges.”

In his view, Russia has become a “geopolitical spoiler” that seeks to undermine trust, confidence and stability in democratic society. Russia’s war games and regular military exercises have struck fear in its neighbors, including Poland and the Baltics. Even countries that are geographically far from Russia, such as the Balkans, fear Russia’s subtler methods of destabilization including disinformation and cyber warfare.

Today, there is “no way” Moscow could join NATO, says Rasmussen, nor does Russia have any interest in joining an alliance that it perceives as a threat. In Putin’s address to the Russian Parliament shortly after the Crimea annexation, he said Russia was humiliated by NATO’s expansion eastward after the fall of Communism. “They lied to us many times, made decisions behind our backs.” The Russian president has repeatedly warned NATO against forging closer ties with Ukraine and Georgia, saying it was “irresponsible” and would have consequences for the alliance, which he did not specify.

In theory, NATO’s door “remains open to any European country” that meets membership requirements. However, former Montenegro ambassador to NATO, Garcevic believes the reality is constrained by fear over a resurgent Russian threat. “I can’t see further NATO enlargement happening in the near future. European countries are very cautious about Russia’s reaction.”

Rasmussen insists that “NATO has never been more needed.” And NATO members have shown some strategic unity in countering the Russian threat. Since 2014, the alliance has said “readiness” has been at the top of its agenda, which has led to security reinforcements of some 4,000 additional troops on its eastern flank. Gustav Gressel, a Senior Policy Adviser at the European Council on Foreign Relations, said these measures amount to reassurance, not deterrence. NATO members have unanimously refused to recognise the annexation of Crimea, and all have maintained economic sanctions despite regular criticism over the measures by Austria, Italy, Hungary and other member states. “But sanctions alone do not reflect a united strategy on dealing with Russia,” Gressel said.

NATO has not really risen to the Russian challenge, others agree. “We haven’t done enough,” Rasmussen says. Only a few NATO nations dared to militarily support the Ukrainian armed forces. Those that have, including the U.S., Canada, Poland, Slovakia, the Baltics and the U.K. have done so on a voluntary basis, and not as part of a NATO initiative. Hungary has blocked greater institutional relations between NATO and Ukraine.

After Russia annexed Crimea, Rasmussen says he was surprised at how some of the bigger European countries, including Germany and France “were very careful not to admit what was happening.” Since NATO can only act with a consensus from all its members, the alliance ultimately could not take action. Rasmussen believes Germany’s hesitation was connected to a “historical gratitude” for Russia accepting its reunification in 1990, while France thinks “Russia’s interests should be respected because it is a big country.” In the U.K., he considers there is a more “realistic attitude” about the Kremlin’s geopolitical ambitions. “The U.S. and Europe need to take firm stance because the only language Putin understands is the language of power,” says Rasmussen.

But for the first time in NATO’s history, a U.S. president has questioned the validity of the security alliance. Donald Trump has questioned Washington’s commitment to NATO, calling it “obsolete” and has suggested the alliance is a bad bargain for the U.S. It is “extremely dangerous” when democratic leaders send doubtful messages about their resolve, says Rasmussen. “It leaves behind a vacuum that will be filled by the bad guys. Putin, Assad, Kim Jong-un will have more room to maneuver.”

Rasmussen and Garcevic are confident NATO will continue to exist because “its task to protect democracy and human rights is eternal.” Collective security has never been more important, they say. But the alliance’s existence has also perhaps never been more threatened by a lack of unity among political leaders. NATO’s ability to protects its members is as much about political strength — sending the right signal — as military capability. 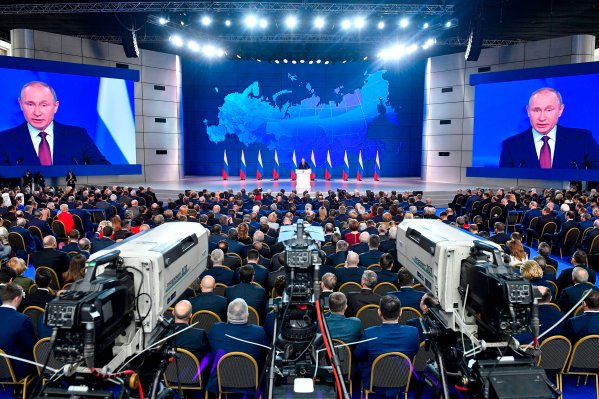 How Putin Built a Ragtag Empire of Tyrants and Failing States
Next Up: Editor's Pick