9 Clues That Set Up Kendall’s Big Cliffhanger on Succession

The story contains spoilers for season 3, episode 8 of Succession.

Is Kendall Roy dead? In the very last scene of Succession season 3, episode 8, we find Kendall lying on a pool float, face down, a beer in his hand. His two kids, lounging poolside, head into the house and leave their father alone. Kendall acknowledges their departure before seemingly passing out. His head lolls into the water. The beer bottle he’s holding begins to float away. A few bubbles break the surface of the water. Maybe he’s breathing, maybe he stops. Cut to black.

We don’t know if Kendall has drowned, and we won’t find out until the show’s season finale on Sunday. But things look bleak for Logan’s No. 1 Boy.

Succession has been hinting for years that Kendall will either die or have a near-death experience. The camera often lingers on shots of Kendall submerged in water or teetering on a ledge. The directors frequently shoot actor Jeremy Strong in Christ-like poses. Strong has only stoked rumors of his departure of the show by insisting that Succession is a Shakespearean tragedy with a suitably grim end for Kendall.

Here are the many clues you may have missed that set up season 3’s major twist.

In season 1, Kendall gets into a car accident with a caterer at Shiv’s wedding. The car sinks to the bottom of a bog. Kendall manages to escape, but he doesn’t save his fellow passenger. Logan then covers up the incident for his son.

Succession has been peppering the show with disconcerting images of Kendall in or around water ever since. Season 2 begins with a shot of Kendall in a hot tub, fully submerged save for his eyes and nose peaking out over the water. He’s hiding from the world and suffering psychologically, barely able to stay afloat.

Season 3 similarly opens with Kendall suffering a panic attack while lying fully clothed in an empty bathtub. Though this ought to be a victorious moment for Kendall—he’s just exposed his father’s culpability in the cruises scandal—the pressure threatens to suffocate him.

Now, Kendall may have finally succumbed to the watery grave that has long awaited him.

On Twitter, writer Alison Herman pointed out that the shot of Kendall passed out in the pool looks an awful lot like a similar moment in the animated series BoJack Horseman, in which the protagonist, BoJack, falls into his pool after an overdose.

The choice in imagery was likely intentional: Earlier in the season, Kendall suggests to his PR team that they hire the BoJack writers to pen jokes for Kendall’s planned appearance on a comedy show. Thematically, the shows share many elements, too. Like Succession, BoJack Horseman is as much a drama as it is a comedy, and like Kendall, BoJack is a lonely man-child and an addict. BoJack hinted throughout its six-season run that the show might end with its central character face-down in a pool: its opening credits show BoJack drowning. For what it is worth—spoilers for BoJack Horseman, which you should really watch if you love Succession—BoJack does not die in this scene. So maybe Kendall will survive, too.

Bad things happen around water in Succession. Remember the therapist they brought in to conduct a family session at Connor’s ranch in season 1? He had to go to the hospital after he had an accident jumping into Connor’s pool.

And the #MeToo scandal that threatens to sink Waystar Royco originated on various Waystar cruises. The Roy family frequently alludes to, and even jokes about, the victims of abuse on those cruises, including one woman who drowned. Though disturbing, it would (from a screenwriting standpoint) be poetic if one of the men who covered up those crimes drowned himself.

There are even hints within season 3, episode 8 that water poses a threat to the Roy family. When Shiv and Tom are discussing whether Shiv loves her husband—cringe—Tom leans up against a wall overlooking a canal. “Don’t fall in!” Shiv jokes. Later, when Roman visits the tech billionaire Lukas Matsson, Roman struggles to step from the boat onto the dock.

Kendall is often shot standing on a ledge, as though he is contemplating taking his own life. In a season 2 episode, shortly after the death of the caterer, Kendall climbs up to the roof of Waystar Royco and looks over the edge of the building. Later in the episode, he returns to the same spot, only to find his father has erected a glass barrier to prevent anyone from jumping off the roof. Kendall leans his head against the glass and looks down at the city.

The show recreates the image at the end of season 3, episode 7, after Kendall’s birthday party. He stands on the balcony of his apartment and, again, looks over the edge of the building. His girlfriend Naomi wraps her arms around him and literally pulls him back from the ledge. Notably in that same episode, Kendall tells Naomi, “I wish I was…” and pauses. The audience might assume he’s thinking, “I wish I was dead,” though he eventually chokes out, “I wish I was…home.”

Even HBO’s promotional material positions Kendall on a ledge.

The show often shows Kendall in Christ-like poses. In season 1, he emerges from the water after the car accident as if resurrected. In the season 2 finale, when Logan is about to betray his son, Kendall floats in the pool on his father’s yacht, arms spread in a T-formation. (Note, again, that this disquieting scene takes place in water.) Kendall’s father even gives him a Judas-like kiss before sending him back to New York as the family’s sacrificial lamb.

At his birthday party in season 3, Kendall plans to be lifted up on a cross, but then scuttles the gambit when even he recognizes the moment would read as aggrandizement. The episode ends with him lying on Naomi’s lap, in what could be a recreation of the famous pieta scene in which the Virgin Mary holds the dead body of Christ.

Parallels between Kendall and Jesus serve to underline the extent of Kendall’s self-delusion: Kendall tells Logan that he sees himself as a “good guy,” in contrast to his devilish father. But in truth, Kendall is egotistical and amoral.

The scenes may also hint at the role Kendall could play in the Roy family saga after death: Faced with his passing, will Kendall’s siblings confront their sins and reform?

Kendall’s birthday contains another, even more obvious clue. In a blink-and-you’ll-miss-it shot, we see that Kendall has in fact titled his party “Notorious Ken: Ready to Die.”

Kendall, ever the rap fans, is of course referencing the Notorious B.I.G.’s 1994 debut album, Ready to Die. The rapper was murdered just 16 days before the release of his second album, Life After Death.

Kendall and Logan’s dinner played like the climax of a Greek tragedy—and the last conversation between two characters before one of them is killed off the show.

Logan suspects Kendall has poisoned the food and asks Kendall’s son to taste it for him. Kendall is distraught by his father’s paranoia. “Who do you think I am?” he asks. “I’ll be broken when you die.”

The audience has been waiting for Logan to pass away ever since the very first episode of Succession when it seemed like the Roy patriarch might leave this mortal coil without having named a successor. But how would Logan react if Kendall went first?

The father-son duo may have a love-hate relationship, but Logan likes to spar with Kendall. As Logan’s ex-wife so bluntly puts it, Logan enjoys kicking the things he loves just to see if they’ll come back to him. So far, Logan’s children have always returned even after dozens of humiliations and betrayals. When Kendall proposes leaving the company at dinner, Logan refuses. He wants to keep Kendall close. Death is the only way for Kendall to escape this toxic dynamic.

In fact, Logan seems to predict Kendall’s death during the dinner. When Kendall asserts that he’s a better man than Logan, Logan rebuts, “How long was that kid alive before he started sucking in water?”

The audience is left with the same question at the end of the episode as bubbles escape Kendall’s nose. How long will Kendall continue to breathe before he meets his end?

The “curse of the Roys” podcast

Early in the episode, Kendall asks his PR representative whether there are any press opportunities available. She says that the hosts of a podcast investigating the “curse of the Roys” keep calling. Apparently, they believe that the death of a caterer may not have been an accident.

The moment serves to remind us, yet again, of Kendall’s guilt. But the mere existence of the podcast begs the question, are the Roys cursed? The reference to the Chappaquiddick-esque incident draws a parallel between the fictional Roys and the real-life Kennedys, many of whom have died before their time. Perhaps the show is hinting at a similar tragic fate for some of the Roys.

If Succession is King Lear, Kendall is doomed

In a New Yorker profile of Jeremy Strong published Sunday evening, Succession producer Adam McKay says that when he originally pitched Strong on Succession, he described the show as a modern-day King Lear.

Succession is not a straight remake of Lear. Shakespeare’s play begins with Lear naming his heirs and ends with those heirs betraying him. Logan (perhaps a student of Shakespeare) refuses to name a successor exactly because it would mean ceding power.

But Lear does have three daughters and Logan has three children who could potentially inherit the Roy empire: Kendall, Shiv and Roman. (Sorry, Connor.) Like Lear’s eldest daughter Goneril, Kendall betrays his father. Goneril commits suicide off stage, which does not bode well for Kendall.

Strong also compares Kendall to Hamlet, another character who does not survive the play.

That the New Yorker profile of Strong published the same day as Kendall Roy’s possible demise is conspicuous. So is article’s title: “On Succession, Jeremy Strong Doesn’t Get the Joke.” Up until this point in the series, most critics have categorized Succession as a dark comedy or dramedy. But throughout the piece, Strong insists that Succession is deadly serious. Perhaps the show is taking a dark turn.

But, practically speaking, why would Strong leave the show that won him an Emmy? Well, Strong likes to suffer with his characters. The profile lists several over-the-top moments of Strong trying to embody his characters’ misery on set. He asked director Aaron Sorkin to spray him (and other actors) with real tear gas on the set of Trial of Chicago Seven. (Sorkin declined.) And Strong has said he isolates himself from the rest of the Succession cast when preparing for scenes, in part because Kendall feels so lonesome.

Brian Cox, who plays Logan, has expressed concern for Strong’s wellbeing while inhabiting the character. “I worry about the crises he puts himself through in order to prepare,” he tells the New Yorker. “I’ve worked with intense actors before. It’s a particularly American disease, I think, this inability to separate yourself off while you’re doing the job.”

Living as Kendall for years on end seems unpleasant. So it wouldn’t be a shock if Strong asked to be written off the show or was originally pitched on an intense three-season run on the show with a definitive endpoint.

At this point, the character has arguably completed his dramatic arc. Kendall has now tried and failed to overthrow his father two separate times. That cycle cannot continue forever. After the dinner with his dad, Kendall finds himself stuck at the company with no leverage, no ambition and no will to continue on. It’s difficult to imagine the show without Strong’s intense performance.

But showrunner Jesse Armstrong has certainly succeeded in leaving his audience guessing what will happen next. 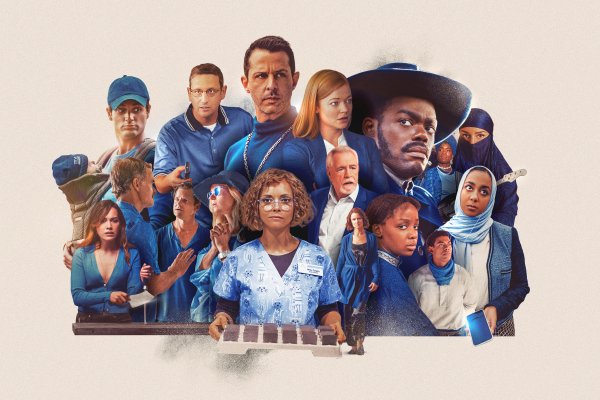