There’s a lot of TV coming our way this holiday season, and one of the most buzzed-about shows out there is Amazon’s new fantasy series The Wheel of Time, developed by Rafe Judkins and starring Rosamund Pike. As the series’ Nov. 19 premiere date approaches—when the first three of eight episodes will be released at once—naturally a lot of people are asking, O.K., but what is this thing, and why are so many fantasy nerds losing their minds over it?

As I’ve been reading, fangirling and writing, both as a layperson devotee and professionally, about The Wheel of Time series since the 1990s, I am here to offer some insight.

The Wheel of Time is based upon a novel series by the same name, published by Robert Jordan starting in the 1990s and until his tragically early death at 58 in 2007, and then completed by Brandon Sanderson in 2013. Prior to Amazon deciding to adapt it into a TV show—a precursor to the streamer’s even more expensive Lord of the Rings fantasy series due next year—it has occupied an oddly contradictory space in the consciousness of the world: huge, and yet mostly invisible. It’s one of the best-selling novel series of all time—over 90 million copies of the series have been sold worldwide—and yet, unless you are a nerd like me who reads science fiction and fantasy literature as a regular thing, up until now it’s more than possible you’ve never heard of it. In other words, the novel series The Wheel of Time (or WOT, as it’s fondly known to fans) was massively famous where it was famous, and pretty much unknown everywhere else.

But why is this story so awesome that more than 90 million people voluntarily read (or at least bought with the intention to read) its 14 novels (plus a prequel), each individual book big and thick enough to kill a guy, totaling a staggering 4.4 million words? And how is Amazon going to make that behemoth into a series that will wrap before all the actors retire and/or civilization collapses? Here’s what to know about The Wheel of Time.

What are The Wheel of Time books about?

Wheel of Time initially centers on five young people—Rand al’Thor, Egwene al’Vere, Perrin Aybara, Nynaeve al’Meara and Matrim Cauthon—from the remote village of Emond’s Field in the Two Rivers. On the eve of Bel Tine, a holiday celebration, they meet a mysterious noblewoman named Moiraine, who displays unusual interest in them. That night, their village is brutally attacked by monsters called Trollocs, and Moiraine is revealed as one of the alternately revered and feared Aes Sedai, women who can channel the One Power. In the aftermath of the attack, Moiraine tells the young villagers that it is one of them who the Trollocs were seeking, and convinces them to leave and travel with her to the Aes Sedai’s stronghold, the White Tower, in the faraway city of Tar Valon.

As they travel, they discover that Moiraine believes one of them is the Dragon Reborn, the reincarnation of Lews Therin Telamon, also called Dragon, who lived thousands of years ago when both men and women could wield the One Power. He was the greatest warrior of the Light, but he made a fatal mistake in battling the forces of darkness that tainted saidin, the male half of the One Power, and sent every male channeler instantly insane. The destruction they wrought was called the Breaking of the World, and even four thousand years later the land has not recovered from it, and is why all men who can channel are ruthlessly hunted down and stripped of their ability to wield the One Power. Nevertheless, the Dragon Reborn is prophesied to be one who will both break the world again and save it, and without whom the world has no hope of survival.

Where does The Wheel of Time fit among other adaptations of fantasy classics?

The Wheel of Time differs from the other major epic fantasies that have been successfully been brought to the screen in a way that deserves note. The two you are most likely to be familiar with, the movie trilogy The Lord of the Rings (based on the series by J.R.R. Tolkien) and HBO’s Game of Thrones (based on the novel series A Song of Ice and Fire by George R.R. Martin), actually represent two nearly polar extremes of the genre.

The Lord of the Rings is the O.G., the Granddaddy of Them All, the Ur-Fantasy Series: it is the Platonic ideal of epic fantasy, the one that informed every epic fantasy that came after it, whether their authors welcomed the comparison or not. Game of Thrones, on the other hand, is the opposite of that: it is a deconstruction of high fantasy, a story that challenges or outright subverts nearly all the classic tropes that embody most fantasy stories. One way to look at it would be to say that The Lord of the Rings is the unironic, elaborate construction of myth, while Game of Thrones is the cynical, methodical dissection of myth.

The Wheel of Time, by contrast, holds the center position between the two extremes these two series represent. WOT is neither “pure” unbridled fantasy, nor grim dismemberment of it. It pays homage to its looming progenitor Lord of the Rings, but is not a slavish imitation of it. It challenges and examines the tropes of epic fantasy, but does not test them to destruction the way Game of Thrones often did. It asks questions of fantasy (more on those below), but then provides its own, satisfying answers to them.

How The Wheel of Time uses fantasy tropes

The series’ central theme revolves around the notion of the Prophesied Hero/Heroine and probes questions about what happens when one is chosen as a hero: What does it mean to be foretold by Fate to be the savior of the world? What if you don’t want to be the savior? What happens if that job actually really, really sucks? What do you do then? What will all your friends and family do, for that matter?

WOT’s central story looks at the role of Fate in the characters’ lives, as first embodied in a group of young, untried, seemingly ordinary villagers: Rand, Mat, Perrin, Egwene and Nynaeve. Against their will, they are hurled into a bigger, scarier, and more dangerous world than they knew existed, to learn how they are not, in fact, ordinary at all, but have extraordinary destinies that are tangled with each other and with the world they find themselves having to fight for. While this is exactly what one might expect from an epic fantasy, WOT puts a unique spin on the trope—one which I hope comes through clearly in the TV adaptation.

The Wheel of Time
Courtesy of Amazon Prime Video

WOT is also set apart by the manner and sheer scope of its world-building. Series’ author Robert Jordan (the pen name used by James Oliver Rigney, Jr.) drew on influences across various cultures, histories, religions, mythologies and folklore to inform his mythical world—and part of the fun of reading the series is in seeing how he blends and shuffles everything together in ways that shouldn’t quite work, but do. Readers have long enjoyed tracking down the sources to varied allusions, references and riffs in the series (one of my favorites: Egwene’s full name, Egwene al’Vere, is a linguistically jigsawed version of “Guinevere”).

The other major theme of Jordan’s story involves the roles of men, women and power. On one hand, the power is literal, in the sense of the One Power, magic which is divided into two halves, the male and the female. But it also includes metaphorical power, in the sense of a world in which women are the only ones left who can wield that magic safely, the effects it has on gender roles, and the effects it has when that state of matters begins to shift.

By seriously examining the implications of a world where, because of the sin of the Breaking of the World, men are generally not trusted to hold power, Jordan offered, for his time, a groundbreaking examination of gender roles in fantasy. Under a modern lens, though, the extremely binary gender divides in Jordan’s world are somewhat outdated; according to rumor, the TV series adaptation may examine gender roles with a more progressive understanding.

The Wheel of Time is a lot to summarize—but such a big subject deserves a big answer, and whether the TV adaptation can do justice to such a compelling, sprawling novel series is truly an exciting moment for fantasy fans like me around the world.

Leigh Butler is a writer, blogger and critic who examines the impact of sociocultural issues on popular science fiction and fantasy works (and vice versa). She has been a regular columnist for Tor.com since 2009, with three series (so far) to her name: The Wheel of Time Reread, A Read of Ice and Fire, and the Movie Rewatch of Great Nostalgia. She lives in New Orleans. 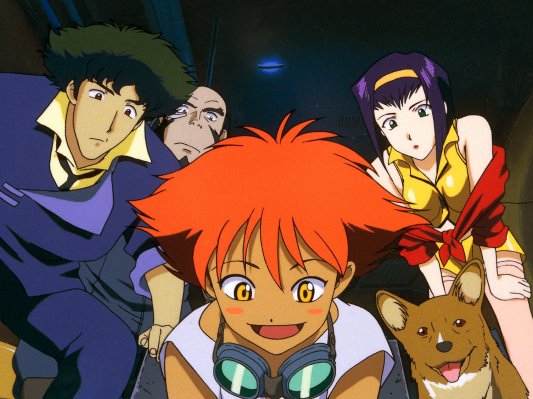 Everything to Know About the Original Cowboy Bebop Before You Watch the Netflix Adaptation
Next Up: Editor's Pick