The movies could use more bad gals these days, more “Ask me if I care?” dames like Peggy Cummins’ sharpshooter vixen in Gun Crazy, Annie Parillaud’s assassin savant in La Femme Nikita, Rebecca Romijn’s slinky-chic manipulator in Femme Fatale. But if we’re not careful what we wish for, we’ll only get more characters like the one Rosamund Pike plays in writer-director J Blakeson’s wanly nihilistic I Care a Lot, a grifter who positions herself as a guardian of the helpless elderly so she can bilk them out of their savings. Pike’s Marla Grayson explains her MO in an early voiceover: “There are two types of people in this world: the people who take and those getting took.” She vows she’ll never to be the latter.

That would be an OK starting point for a character, but it’s pretty much all we get from Marla Grayson. It’s not hard to make a feminist argument for the archetypal bad gal: sometimes women have to be out for themselves just to take care of themselves. But historically, the best of these characters—even beyond beyond their pure, joyous nastiness—are so electrically vital you can’t turn away from them. They do more than just slink toward us in a kimono-wrapper of alleged feminist trappings, wearing a cool “the patriarchy made me do it” smile. But Marla, in her spiky stilettos and even sharper-edged blond bob, is barely a sketch, let alone a character; there’s no charisma for her cool greed to latch onto. And she makes it hard to care much for I Care a Lot.

Marla’s scam involves finding loaded elderly folks whose coffers can be drained easily and, ideally, over a sustained period. A crooked doctor (Alicia Witt) helps her locate one such mark, Jennifer Peterson (Dianne Wiest), a seemingly lovely and very together older lady who owns her own home outright and has no offspring waiting to gobble up their inheritance. A clueless judge (Isiah Whitlock Jr.) grants Marla guardian status. Aided by her co-conspirator and girlfriend Fran (Eiza González), Marla moves in on Jennifer immediately, relocating her to a nursing home against her will so she and Fran can sell off her house and its grand appointments. When Jennifer protests her sudden incarceration, the smiling nursing-home staff pumps her full of drugs. But Marla comes to suspect that Jennifer isn’t the helpless creature she’d assumed her to be. A shadowy mobster type, creeping from the underground in the form of Peter Dinklage, takes great interest in Jennifer’s whereabouts, and Marla finds herself fighting to protect her investment.

With I Care a Lot, Blakeson (whose credits include The 5th Wave and The Disappearance of Alice Creed) takes the easy way out, showing smart women doing bad stuff without bothering to write actual characters for them. To the movie’s credit, possibly, it hints tastefully at steamy sex between hot, evil lesbians, in a sort of semi-modern, semi-ironically retrograde way. Perhaps this is progress, though it’s odd that, in 2021, we seem to live in a world where Lana and Lily Wachowski’s smart and wickedly erotic Bound seems never to have been made. The sex in I Care a Lot is the supersafe kind, tender enough but also weirdly neutered.

Dianne Wiest's Jennifer might have been the most interesting character in the film, had her story been given more space
Seacia Pavao / Netflix—2020 © NETFLIX

We’re repeatedly reminded that Marla is very, very bad, and very, very tough: When she realizes she’s lost a molar during a violent scuffle, she pops into a convenience store for a quart of milk, into which she drops the poor, homeless tooth, the better to keep its roots nice and fresh until she can see her dentist. That may have been my favorite thing in I Care a Lot, a grand, ostrich-plume wave at Marla’s vanity and resourcefulness. But otherwise, I felt I knew so little about her and her particular brand of evil perseverance. Sure, Marla likes money—as any good bad gal does—but we never see her enjoying it. (In the apartment she shares with Fran, the duo appear to store their clothes folded in IKEA cubicles. Why go to all the trouble of milking old folks dry if you’re not even going to buy a nice dresser?) Pike has played a version of this role before, as the carrara-cool wife in Gone Girl, and she’s not bad at it. But even a sphinxlike sociopath can have a few beguiling human quirks, and Marla gets none. She’s an elegant blank.

One of Blakeson’s points seems to be that women need to be this bad to get any respect from men. (This notion is telegraphed, heavily, in a scene with Chris Messina as a heavy-hitting lawyer who’s unable to countenance the fact that some doctors—many, in fact—are women.) But I Care a Lot isn’t clever or perverse enough to make that idea sing; its cynicism is both clean and boring. And its most intriguing character, Jennifer—played with a spicy undercurrent of deviousness by Wiest—disappears halfway through the movie, only to reappear conveniently at the end. Jennifer’s story might have been the true bad-gal key to I Care a Lot—if only Blakeson could have been bothered to tell it. 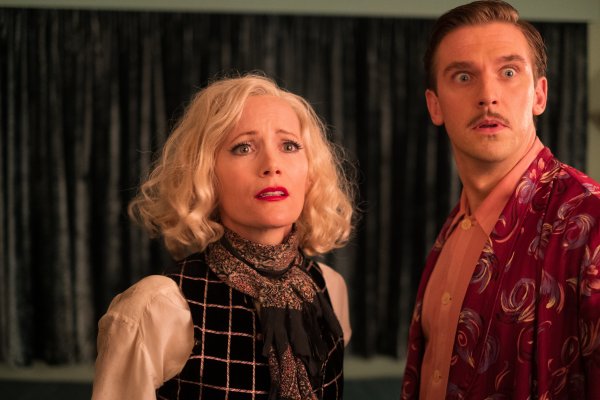