Glenn Youngkin, governor-elect of Virginia, speaks to members of the media outside the Executive Mansion in Richmond, Virginia, U.S., on Thursday, Nov. 4, 2021.
Carlos Bernate/Bloomberg —Getty Images
By Nik Popli

​​Former President Donald Trump lost Virginia in 2020 by 10 points after discouraging his own supporters nationwide from trusting the integrity of early voting.

But Glenn Youngkin won the state’s governor’s race last week in part by telling Virginians to vote early. Now, his victory has created a blueprint for other Republican candidates struggling with how to get early votes without alienating a base that believes Trump’s claims of election fraud.

Experts warn that Republicans need to break with the former president on early voting or else they risk losing their races. “Candidates cannot simply ignore a growing swath of voters who are interested in casting their ballots early,” says Matt Beynon, a Republican consultant who is advising a number of candidates in the midterm elections. “They’d be ignoring those votes at their own peril.”

Many are hoping to learn from Youngkin’s strategy: He took 46% of all early in-person votes, according to TIME’s calculation of precinct-level returns. Youngkin finished just 65,000 early in-person votes behind Democratic nominee Terry McAuliffe, a much closer margin than most experts predicted. The election result will be officially certified on November 15. (Trump was particularly critical of mail-in and absentee voting; Youngkin got 24% of absentee ballots cast in the race.)

According to campaign strategists, Youngkin was able to make these strides because he encouraged early voting while retaining a base energized by election conspiracies. Youngkin held several rallies across the street from early polling locations, where he encouraged crowds of up to 400 supporters to walk in and vote. He invested $7.1 million in early vote messaging, his campaign says, texting supporters and knocking on doors to ask if they knew their early voting site or needed help requesting a mail-in ballot.

But he also campaigned with “election integrity” as a centerpiece of his platform. He offered supporters a “membership card” in his Election Integrity Task Force, held rallies with State Senator Amanda Chase—who spread numerous conspiracy theories about the Jan. 6 riot at the Capitol—and supported an audit of Virginia’s voting machines. Youngkin did not appear with Trump during the campaign, but the former president called on his supporters to vote for the GOP candidate. After Youngkin won, Trump released a statement saying, “I would like to thank my BASE for coming out in force and voting for Glenn Youngkin. Without you, he would not have been close to winning.”

Youngkin walked a careful line, urging voters to get to the polls early while simultaneously stoking their fears about election integrity. “We told voters who were skeptical to go and vote now,” says Kristin Davison, a senior strategist for Youngkin’s campaign. “The best way to ensure that this election is going to be saved is to go be a voter, and it really caught on.” Davison adds: “Those two issues go hand in hand.”

Republican campaign experts say that’s the same strategy other candidates should adopt in next year’s midterm elections. “You can easily ask for assurances that the person who is voting is indeed registered to vote in that district, and at the same time, call for a large number of people to vote either early in-person or early by mail,” says Whit Ayres, a veteran GOP pollster from Virginia. “Those are not inconsistent.”

But Republican candidates in other states may not be able to easily replicate Youngkin’s gains in early voting. In response to Trump’s baseless claims of fraud, several states have enacted laws this year to limit access to the polls by groups that tend to vote for Democrats. That hasn’t been the case in Virginia, where Democrats have sat in the Governor’s mansion since 2013. The Commonwealth expanded voting access, established a 45-day window to vote early in person or by mail, and extended the hours and locations of early polling sites. The overall early voting total—close to 1.2 million ballots—was a record in Virginia despite the off-year election.

Now as Governor of a state once seen as a Democratic stronghold, Youngkin will have the chance to enact new election policy, including his push to require photo identification in order to vote. Stricter election laws could make it harder for people to vote early— the same tactic that helped him win.

Focusing on early votes used to be an important approach for the Republican Party, until former President Barack Obama defeated the late Sen. John McCain in 2008 with a majority of early turnout. Ayres says Republicans had for years “mastered the art” of absentee ballots and early voting because they tend to do better among older demographics.

“Donald Trump blew up that strategy,” he says. “But Glenn Youngkin understood the advantage of banking votes early and ran a very effective campaign to get his supporters to vote early. That has traditionally been a Republican success story—and it was for Youngkin in 2021.”

Now the question is whether it will be for other Republicans in 2022.

-With additional reporting by Chris Wilson/Washington 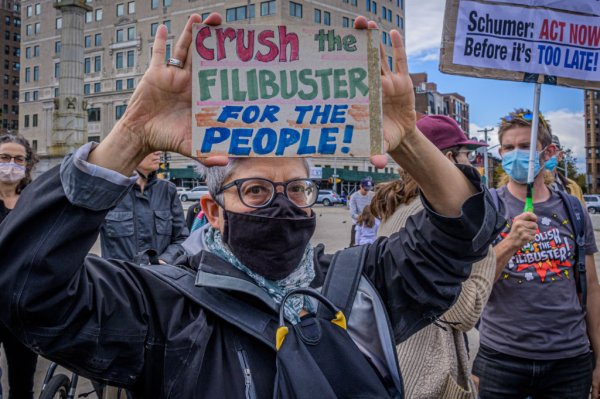 What Next After Republicans Block Voting Rights Bill?
Next Up: Editor's Pick