With Belfast, Kenneth Branagh Affectionately Recalls a Childhood in a City Torn by Strife

Kenneth Branagh is an all-caps filmmaker, generally preferring the grand dramatic gesture even when a subtler flourish would do: the same man, after all, gave us both a gorgeous full-length Hamlet (1996) and a bloated Murder on the Orient Express (2017). His look-at-me prowess can drive you nuts or be the very thing you cherish about him, and it’s OK to feel a jumble of both. Branagh’s semiautobiographical Belfast, which takes place in that city in 1969, at the onset of the Troubles, may be the ultimate test of finding that balance: It’s both intimate and almost comically egotistical—yet Branagh has clearly poured so much love into it that you can’t be too hard on him. It’s hard to resist the movie’s affectionate energy.

Early in Belfast—shot mostly in nostalgically velvety black-and-white—we see adorably sweater-clad 9-year-old Buddy (played by newcomer Jude Hill) playing boisterously with other kids on his idyllic little street. That perfect-childhood spell is broken when an angry mob storms the block, smashing windows and setting fires for no reason that would be apparent to a kid. The small, tidy house where Buddy lives with his mother (Catriona Balfe) and older brother (Lewis McAskie)—his father (Jamie Dornan) is working in England to support the family, returning home for periodic visits—remains unscathed. It is, we’re told, “only the Catholic houses” that are the targets of the rioters’ boiling rage, and Buddy’s family is Protestant. Still, his parents decry the violence: Should they stay or should they go?

If you’re looking for cogent ideological analysis of fairly recent Irish history, you’re not going to find it in Belfast. This is a child’s-eye view of serious adult problems, in the vein of Hope and Glory, John Boorman’s exuberant 1987 film memoir of being a kid in London during the Blitz. To that end, Branagh gives us many, many shots of Hill’s Buddy looking cherubically darling, his two front teeth drastically failing to reach accord about which direction they should be heading. It’s all a bit much.

The central family in 'Belfast' takes in a movie as violence erupts in the city around them
Rob Youngson / Focus Features—© 2021 Focus Features, LLC.

Read more: The Complex History Behind Belfast—and Its Echoes in Present-Day Northern Ireland

Even so, as a portrait of one future auteur’s late-1960s childhood, Belfast is vivid and heartfelt: In one scene, the whole family treks out to see the ridiculous 1968 crowd-pleaser Chitty Chitty Bang Bang, falling under the spell of its godawful but indelible theme song. Balfe and Dornan are superb as young parents trying to figure out what’s best for their family amid escalating political violence. And as Buddy’s adored grandfather, Ciarán Hinds might have been a salt-of-the-Earth cliché—yet his lovelorn-hound eyes keep the movie grounded. Love him, hate him, or love-hate him, Kenneth Branagh understands how one person’s eyes can unlock the power of memory. He has also never forgotten the Chitty Chitty Bang Bang song—the ultimate proof, no matter how high he climbs, that he is human, after all. 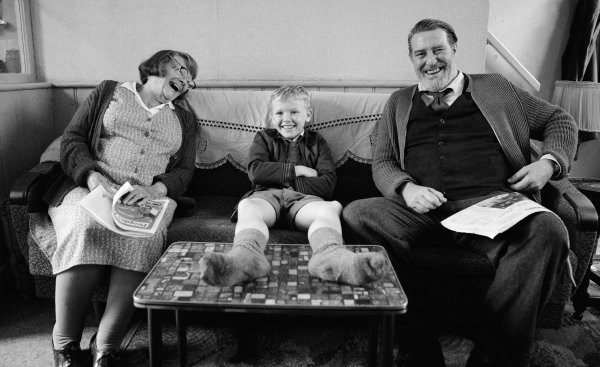 The Complex History Behind Belfast—and Its Echoes in Present-Day Northern Ireland
Next Up: Editor's Pick