It makes sense for Kenneth Branagh to not only star as gumshoe Hercule Poirot in Murder on the Orient Express (out now), but to sit in the director’s chair too. The detective–“probably the greatest in the world,” the character modestly admits–is a master at manipulating the people around him. The 56-year-old director is similarly skilled at positioning his ensemble, which includes Judi Dench, Penélope Cruz, Michelle Pfeiffer, Johnny Depp, Derek Jacobi and Willem Dafoe. While fans of Agatha Christie’s 1934 mystery and Sidney Lumet’s 1974 adaptation may already know whodunit, Branagh has sleekly repackaged the tale, leaving its glamour intact. He sat down with TIME in London to talk about making the movie.

Others have taken this story for a spin before. Did that concern you?

I’m so used to working with classic material that the notion that others have been there before doesn’t feel intimidating, maybe because I wouldn’t be doing it if I didn’t feel some authentic and now reason. In Murder, it was the emotional charge, the death of innocence and the question of revenge and whether it can ever provide closure that got me going. The story is more than what Christie herself referred to as “mere entertainment.”

What’s the Branagh take on Poirot?

His character in our version is melancholy and romantic, and he has a savant, childlike capacity to live in the moment. There’s a deliciousness in presenting a man who both finds it ticklish to read a Charles Dickens novel but has also got this bloodhound, compulsive obsession for finding the truth. He is a sort of moral absolutist: there is right, there is wrong, there is nothing in-between. But by the end of the film he has to consider that perhaps there is significant material in-between that he now has to accommodate.

This cast is impressive. How difficult was it to convene?

With hindsight, it feels like it was easy! There was an almost talismanic quality to casting Judi Dench–as soon as she was in, other actors followed. One practical issue was having them all together as often as possible. I told them I’d need a month in the middle for them all to be there, but I promised it would be fun. The sense I had from them was that they trusted that if I am, as some people have told me, an actor’s director, then their performances would be cherished and looked after.

How much was filmed on location in New Zealand, France, Malta and Switzerland?

At first, we thought we’d do everything in the real places, but we found it calamitously impossible. It’s not easy to stop a train halfway up a French mountain and say, “Come back, Penélope’s hair is slightly different.” Then the French rail officials scream at you and say, “We’re running a railway, not a movie company!” Having some 15 movie stars in period outfits with makeup and wigs as well as dogs, food, flowers and everything else meant bringing it back to our workshop. We were probably on set 80% of the time.

Tell me about the striking shot that follows Poirot through train cars.

I wanted to invite people to feel the sense of excitement and urgency surrounding the journey. It felt like it should be a moving shot and that the actors should all be there at the same time. As Poirot passes through the train, things are being flambéed, Leslie Odom Jr. is taking photos, Penélope Cruz is re-entering the train, and Derek Jacobi’s valet is ironing one of Johnny Depp’s shirts. Somehow the life of the whole thing is in the swirl of the departure. We were rehearsing all day because there are so many variables. Each take took three or four minutes, and we did it around 17 times.

Without dissing the digital format, I feel there is an immersive, three-dimensional quality to 65-mm film. It’s great for spectacles–if you have big landscapes, everything is sharper and deeper. It’s also great for the human face, as the silver in the celluloid moves, as opposed to pixels, which are locked in. That works well in a movie about the forensic search for the truth. Dunkirk was the same; myself and [director] Christopher Nolan continue to bang the drum for the texture, quality and density of 65 mm.

How does one direct himself?

Daisy Ridley’s character points out that Poirot places people in different environments to intentionally unsettle them or make them reveal things, which I suppose are directorial choices as well. Both detective and director are truth seekers. An odd blink may suggest a lie has been told, or a kind of fib in the performance itself.

How has your experience directing theater informed your film directing?

One of the challenges of the movie is that there is almost a mathematical precision to the introductions, the crime, the interviews and the solution. It can feel like one thing after another. My work in the theater has allowed me to understand how best to maximize the theatrical effect. Mostly the theatrical experience has been about having a confident approach with actors, to feel some of the play at work and the trust between director and actor to produce a sense of freedom. It’s a theatrical event in a film if you’ve got 15 actors and you say, “We’re not going to rehearse. I’m going to start shooting.” They know that’s a little play in those two minutes.

Did you learn French for the role?

I tried, but I was hopeless. Booking a room with a shower and a bath was the kind of level I was reaching. I’d speak my version of French at home. The character in my life who got it the most was my little Jack Russell, who was totally indifferent to the challenges in my day and seemed to respond to my instructions as well in French as he did in English–which is to say, not well at all.

What about this story do you think makes it timeless?

We find out in the movie who did it, how they did it and why they did it–and we infuse the why with a lot of passion. But the moral question was, What is justice now? “An eye for an eye, a tooth for a tooth,” if taken to its logical conclusion, leaves no one standing. Where do we draw a line? Poirot says early in the film, “We must be better than the beasts,” but he understands that primal urge. The articulation of that feels like a modern kind of issue. Audiences wanted it to be complicated. They didn’t want Poirot merely to solve and then walk away. 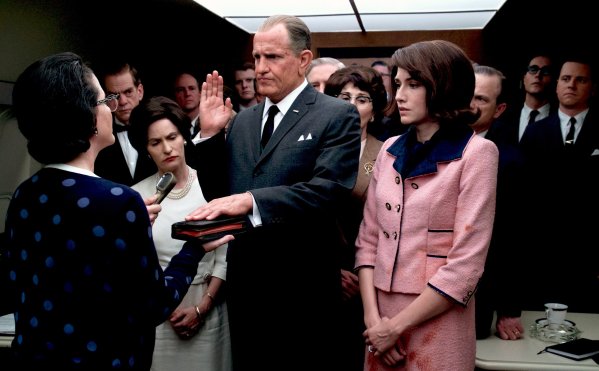 Woody Harrelson Shines as a Crass and Contradictory LBJ
Next Up: Editor's Pick