After 158 Years U.K. Lawmakers Have Voted to Decriminalize Abortion in Northern Ireland. The Fight's Not Over Yet

Pro-choice supporters stage a demonstration in Parliament Square to campaign for women's reproductive rights, legalisation of abortion in Northern Ireland and its decriminalisation in the UK on 11 May, 2019 in London, England.
Wiktor Szymanowicz—Barcroft Media via Getty Images
By Suyin Haynes

As Sarah Ewart watched from her home in Belfast while U.K. lawmakers voted for a final time to decriminalize abortion in Northern Ireland, she broke down. The news came after a long, difficult struggle for Ewart, and for Northern Ireland where abortion was illegal for over 150 years. Although Northern Ireland is part of the U.K., where abortion is widely available, it has had its own laws on abortion. The Republic of Ireland legalized abortion last year but women north of the border have still been forced to travel in order to access the procedure.

Six years ago when Ewart was 23, she and her partner were told that her pregnancy had a fatal fetal diagnosis, and that her baby would not survive outside the womb. “Once I realized what [the diagnosis] meant, I couldn’t face continuing with the pregnancy knowing that I wouldn’t hold my daughter at the end of it,” Ewart says via email. Deciding to terminate the pregnancy, she says she was shocked to discover that she would not be able to have the procedure in her own hospital because of Northern Ireland’s laws on abortion, which are some of the most restrictive in the world.

Abortion in virtually all circumstances, as well as the purchase of abortion pills and performing an abortion, are criminal offenses and carry a maximum sentence of life imprisonment. (An ongoing high-profile case involves a mother facing a criminal trial for buying abortion pills online for her 15-year-old daughter.) Like Ewart, who currently has a case before Belfast High Court, many Northern Irish women and pregnant people seeking abortions are forced to travel abroad or to other parts of the U.K. for the procedure; government statistics showed 1,053 women travelled in 2018. The latest statistics from 2017/2018 show that over the same time period, only 12 abortions were carried out in Northern Ireland. “I had no option but to board a plane and travel to London,” Ewart says.

That changed this week. On July 24, a bill was signed into law in the U.K. parliament on maintaining public services in Northern Ireland, as it currently does not have a functioning government. Two amendments were tabled to the bill by Labour M.P.s Conor McGinn and Stella Creasy, one to legalize same-sex marriage and the other to liberalize abortion laws. In the weeks leading up to the bill’s passage, M.P.s argued that it was Westminster’s responsibility to intervene to protect the rights of women and pregnant people in Northern Ireland given the absence of a functioning power-staring government in the region.

Northern Ireland has not had a functioning government for more than two years, because of a bitter division between the region’s two elected parties. Just last year the U.K. supreme court and the United Nations Committee on the Elimination of Discrimination Against Women ruled that Northern Ireland’s abortion laws contravened the rights of women. Parliament signed the bill into law containing the amendments, in a victory for campaigners, although what that means in terms of how women in Northern Ireland will be able to access abortions is not yet clear.

“It’s hugely significant and it hopefully will be a message of hope for other countries where there are similarly restrictive abortion bans, particularly in the U.S. where we are seeing a very concerning and rapid rollback on abortion rights,” Grainne Teggart, Amnesty International’s Northern Ireland campaigns manager, says. “In many ways, it’s something ridiculous that in 2019, we are still having to fight for. Finally now we are getting to a place where we will have laws that respect women’s choices and give them the space and the privacy to make their own decisions about their own bodies.”

There are still elements of the law that will need to be ironed out. Abortion will be decriminalized starting October 22, putting an end to prosecutions and cases currently facing trial. But a consultative period will take place until the end of March as authorities establish specific regulations around abortion access and services in Northern Ireland.

For abortion rights campaigners, it’s a significant win that the consultation will focus on “how” services will operate, as opposed to “whether,” given the previous near total ban on abortion. “The fact is that a huge impediment to healthcare has been removed,” says Cara Sanquest, an organizer of the London-Irish Abortion Rights Campaign. “The threat of criminalization is no longer there; the stigma, the silence, the shame, the fear. It will take a while, but it’s a huge barrier that’s been removed.”

Northern Ireland resident and campaigner Sarah Ewart (C), who after having been diagnosed with a fatal foetal abnormality in 2013 travelled to England for a termination, with her mother stands with her mother Jane Christie (L) and Amnesty International's Grainne Teggart, as she speaks to members of the media after arriving at Belfast High court in Belfast, on January 30, 2019.
Paul Faith —AFP via Getty Images

The next few months are crucial. “It is a relief, but the true relief will come when there is provision,” says Sanquest. “Until the system is up and running, we’ll still be holding our breath.” Her London-based group campaigns for free, safe, legal and local access to abortion across the island of Ireland, and led the #HomeToVote campaign in the run-up to the 2018 referendum on abortion in Ireland. That referendum resulted in a landslide result to overturn the Republic’s ban on abortion, by 66%, and Sanquest has been closely monitoring the experience in Ireland since. “Until the system [in Northern Ireland] is up and running, we’ll still be holding our breath. We know from the experience in Ireland that provision is not perfect straightaway, and there are hospitals in Ireland who are still not holding abortions.”

The outlook could also be complicated given Northern Ireland’s current political situation. Under the 1998 Good Friday agreement, which brought peace to the region, Northern Ireland is governed by a power-sharing arrangement intended to unite republicans and unionists. In January 2017, a dispute between the two governing parties, the Democratic Unionist Party (DUP) and the Republican party Sinn Fein, led to the dissolution of Northern Ireland’s government. If that government manages to form an agreement and functions again before October 21, that could place the new law in jeopardy.

The DUP is currently in a deal that keeps the U.K.’s Conservative Party in power, and have taken a consistently anti-LGBT and anti-abortion stance. Over the weekend, DUP leader Arlene Foster called the efforts to legalize abortion in Northern Ireland through Westminster “insidious,” saying that the issue should remain under Northern Ireland’s control. She said she didn’t believe a majority of people in Northern Ireland would support legalizing abortion up to 28 weeks. On Tuesday, Sinn Fein tentatively came out in support of the new law, having argued in favor of limited abortion reform for some time.

“For those who try to put forward an argument that Westminster is imposing something that the Northern Ireland public don’t want is simply not borne out in reality. All the available evidence demonstrates that the Northern Ireland public wants this,” Teggart says. In 2018, an Amnesty International poll found that 65% of the Northern Irish public believed that having an abortion should not be a crime. Although campaigners say they would have liked to see a regional government repeal the abortion legislation, they had to act on their own. “The fact is that [the Northern Ireland Executive] had ample opportunity and failed. Women can’t wait, so we turned to Westminster for that and they delivered,” Teggart says.

Sarah Ewart too chose to take matters into her own hands. She chose to speak publicly about her traumatic experience, and has been challenging Northern Ireland’s strict abortion laws in Belfast’s High Court, aiming to have the strict abortion laws declared incompatible with the European Convention on Human Rights. She’s due to receive a judgment in September, and is hoping for a favorable judgment to legally back up what campaigners have been saying for decades.

“We need the court to agree with us that the law violates rights,” she says. But this week, she’s felt a sense of relief and is counting down until October 21. “The past six years have been extremely difficult for me. I shouldn’t have had to speak about my personal experience to help push for change, but ultimately it became necessary. Politicians and the courts needed to realize that we weren’t going away until the law changed.”

The original headline on this story misstated the legal status of abortion in England, Scotland and Wales. The Abortion Act 1967 made abortion lawful in those countries, but did not decriminalize it. 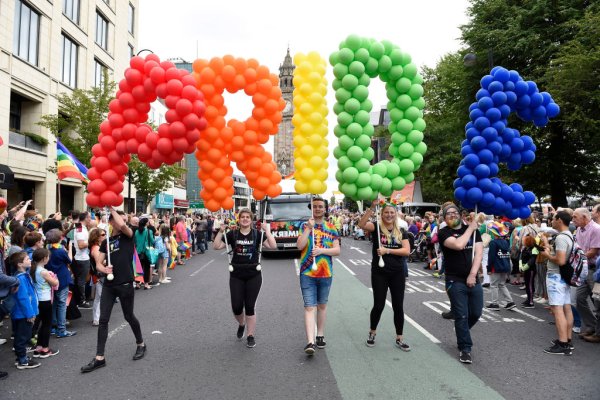 U.K. Lawmakers Just Voted to Back Same-Sex Marriage and Abortion Access in Northern Ireland
Next Up: Editor's Pick