“Women are foolish to pretend they are equal to men,” Lord of the Flies author William Golding once opined. “They are far superior and always have been. But one thing you can’t do with them is take a bunch of them and boil them down, so to speak, into a set of little girls who would then become a kind of image of civilization, of society.” How well this assessment holds up, nearly six decades after Golding published his classic novel about preteen boys who survive a plane crash only to find themselves stranded on a desert island, is open to debate. At the very least, Yellowjackets—a superb Showtime thriller that riffs on Flies without repeating it—suggests the author’s benevolent gender essentialism might have been a mistake.

Created by Narcos alums Ashley Lyle and Bart Nickerson, the show swaps out the schoolboys in favor of a women’s varsity soccer team on its way to nationals. It’s 1996, alt rock rules the radio, and the girls are traveling in style because (get ready to suspend your disbelief) a rich dad has lent them his private plane. When it falls out of the sky and into the wilderness, the traumatized players wait for a rescue that never happens. They’ll ultimately spend 19 months fending for themselves out there, so you know things are bound to get weird.

This isn’t just a teen survival drama, though. Yellowjackets’ main plot unfolds 25 years after the crash, as a reporter starts sniffing around. Each scarred in her own way by what they endured, the survivors have taken remarkably different paths in life. Shauna (Melanie Lynskey) married young and lives in a suburban stupor with a teenage daughter who finds her pathetic and a husband who’s always “working late.” Juliette Lewis is perfectly cast as Natalie, a gun-toting rebel just out of rehab. A nerd who found her purpose administering first aid in the woods, Misty (Christina Ricci, wonderfully creepy) has become a lonely, officious nurse. And Taissa (Tawny Cypress), a married lesbian with a little boy, is embarking on a political campaign that promises to put the women’s shared past under a microscope.

“What do you think really happened out there?” the reporter (Rekha Sharma) keeps asking. That—and specifically the full story of what befell the team’s charismatic captain, Jackie (Ella Purnell)—is the central mystery. Yet Yellowjackets is the rare series whose execution improves upon an already strong premise. Each episode has its puzzles and twists, just as each woman has her secrets, all set up carefully enough to make you wonder why you didn’t unravel them sooner. Lyle and Nickerson are deft with genre tropes. While Nat and Misty serve up a dark buddy comedy, Shauna is a wild soul trapped in a domestic drama and Taissa’s life is a political thriller tinged with horror. The show delivers genuine scares; not for nothing is Karyn Kusama (The Invitation), who directed the premiere, an executive producer.

What makes this patchwork of styles, tones and time periods hang together is the thread of psychological realism that runs through every scene. From menstrual cycles to sexual double standards, Yellowjackets never stops digging through the particular baggage that teen girls bring into a state of nature. 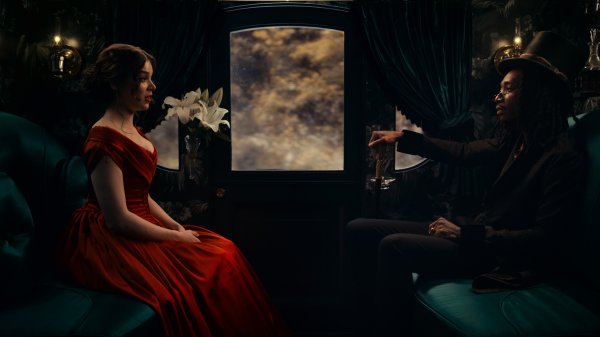 An Elegy for Dickinson, the Weirdest, Most Wonderful Show on Apple TV+
Next Up: Editor's Pick