The World's Top Carbon Emitters Now All Have Net Zero Pledges. Most of Them Are Too Vague

In a surprise announcement on Monday, India, the world’s third largest emitter of greenhouse gases, pledged to reach net zero emissions by 2070. The news, delivered at COP26, the U.N. climate summit in Glasgow, means that all of the world’s major emitters now have a net zero target— a date by which they will add no more carbon dioxide or other greenhouse gases to the atmosphere than they take out.

Combined with a flurry of country targets unveiled before or during COP26, India’s pledge means that 87% of the world’s greenhouse gas emissions and 89% of its economy are now covered by net zero targets, although with differing time frames.

That’s a seismic shift in global climate politics. Less than a decade ago, the idea of reaching net zero emissions was a concept used mostly by scientific researchers and seen as radical by politicians. In 2015, it got an indirect mention in the final text of the Paris Accord, the international climate treaty agreed at COP21. In 2017, Sweden legally adopted net zero as a target for 2045 and then in 2019 a clutch of other countries followed, including the U.K. and France, which set 2050 goals in law. As of Nov. 3, 139 nations have taken up a net zero emissions target, including some of those who have previously been most resistant to climate action.

“If you had asked me even a year ago, at COP26 will we see India, Nigeria, Saudi Arabia, Australia, Russia, walking out with commitment to get to net zero emissions? I would have said that that’d be very optimistic,” says Thomas Hale, associate professor in global public policy at the University of Oxford’s Blavatnik School of Government, part of the Oxford Net Zero research project, set up to study the world’s progress on cutting emissions. “It’s really evidence of a tipping point dynamic where something seems impossible and becomes possible, [starting with the work of] climate activists and developing countries, who pushed it into the Paris Agreement.”

But climate advocates’ enthusiasm around the rise of net zero targets comes with a major caveat. The adoption of a net zero target doesn’t mean that a country is on track to wean its economy off the fossil fuels that produce most greenhouse gas emissions in time to stop the worst of climate change—or that it even intends to do so. Different countries have very different strategies in mind for reaching a net zero future.

According to Oxford’s Net Zero Tracker, launched by Hale and colleagues the week before COP26, only a fraction of them are strong, meaningful commitments with clear plans attached. In fact, just 18% of global emissions and 27% of global GDP are covered by these robust pledges.

That doesn’t mean most pledges are useless, but it means they are the start—not the end—of efforts to get the world on track for net zero emissions.

If you’re looking at your country’s net zero target and wondering if it means anything, there are four key points to look out for, according to the Net Zero tracker.

First, the timeline of the target should be in line with the science: climate scientists say the world needs to cut human-caused CO2 emissions by 45% from 2010 levels by 2030, and reach net zero around 2050 to keep global warming below 1.5C over the preindustrial era. (That’s the point after which climate change impacts become a lot worse and avoiding it is the aim of the Paris Agreement). For wealthier countries, which tend to have much higher per-capita emissions than developing countries along with more resources to pay for decarbonization, Hale says the date needs to be 2050 at the very latest and ideally earlier in order to keep the world’s goals on limiting climate change within reach. Interim dates, like 2030, should be included to prevent action being delayed until it’s too late.

Second, targets should include all greenhouse emissions—not only carbon dioxide emissions but also methane and others, which are less plentiful but still play an important role in warming the planet. The target should also cover all emissions generated by a country’s residents, regardless of where they are generated—most have committed only to reducing emissions produced within their borders, leaving out those generated when people fly or ship products around the world or the production of products outside its borders.

Third, net zero targets need to be accompanied by detailed plans of how they will be met, including policies to expand renewable energy, restore natural carbon sinks, help industries transition to clean technologies, and more. Governments should give citizens a way to hold them accountable if they don’t stay on track, such as an institution or law. Though the numbers are growing, according to Oxford Net Zero, only 14 out of the 139 countries have made their targets legally binding. Only 57 have produced a detailed plan.

Fourth, the focus of targets needs to be on reducing emissions and not on offsetting them. Offsetting can be domestic, where a country captures carbon from the air by planting trees or using emerging technologies. Or it can be overseas, where a first country pays for projects in a second country that reduce emissions there, and the emissions reductions are counted in the first country.

While most wealthy countries will use offsets to some extent, scientists say that relying on them too much will endanger global efforts to reach net zero as they are not always effective. In terms of planting trees in order to sequester carbon, there is not enough land on earth to plant enough trees to offset current levels of emissions. Carbon capture technology is currently extremely expensive and could remain so for decades. And overseas offsets are hard to regulate and could end up being counted towards two countries’ targets. Only 15 countries have said they will not use offsetting, per the tracker.

Which countries have the most effective targets?

There are sixteen countries that fulfill Oxford Net Zero’s minimum standards for robustness in all those criteria, to some extent. Sweden is one. It has a legally binding target to reach net zero greenhouse gas emissions by 2045, including aviation and shipping. It must cut emissions by at least 63% by 2030 compared to 1990 levels, with a maximum of 8% of that reduction allowed to come from offsets. Sweden has laid out plans to expand its already large renewable energy supply, continue to pressure the phase out of fossil fuels with a carbon tax, decarbonize transport and ensure more sustainable management of agriculture.

The U.K., the host nation for COP26, also has a target considered robust by researchers at Oxford Net Zero. It has set legally-binding targets to reach net zero by 2050 and cut emissions by 78% compared to 1990 levels by 2035. In October, the government published its plan to get there, including policies to expand the use of electric vehicles, grow the U.K.’s offshore wind sector and overhaul how buildings are heated.

But even a robust target and plan does not mean the government’s actions and spending are in line with its climate goals. In the U.K. for example, critics say the net zero plan doesn’t include enough public money to trigger the radical market transformations that the government hopes to kickstart. Meanwhile, the country is also considering granting approval for an offshore oilfield in Scotland which would produce up to 170 million barrels of oil between 2025 and 2050. The Paris-based International Energy Agency warned earlier this year that no new oil or coal projects should be approved from 2021 onwards if the world is to reach net zero by 2050.

Which countries have the worst targets?

Climate experts have classed Australia’s net zero targets as one of the weakest announced so far. Australian Prime Minister Scott Morrison set a 2050 net zero target last week, after resisting calls to do so for months. While the 2050 date is in line with most other developed nations, there is no interim target for 2030. The government’s newly published climate plan contains no taxes or mandates to help expand renewable energy or close down fossil fuel projects and critics said it “grossly manipulated” emissions data. Morrison says the bulk of Australia’s emissions reductions will be driven by “future technologies” that are not yet developed—a notion that fellow leaders have lambasted as “dangerous”.

Many countries that have recently made net zero pledges presented very vague targets. Saudi Arabia and Russia, for example, which have both set late targets for 2060, have not written them into law, or presented plans to reach them. They haven’t specified whether they zero out all greenhouse gas emissions or just carbon dioxide, or whether they will include their aviation and shipping emissions. Both economies rely heavily on exports of fossil fuels—oil and natural gas—and neither of their governments have indicated that they intend to change that any time soon. Instead, officials have touted plans to invest in carbon capture technologies, and, in Russia’s case, improve carbon absorption in its vast forests.

So, are most net zero targets meaningless?

No. There’s no reason that governments can’t flesh out their targets and plans to make them more robust in the coming months and years.

This year’s U.N. climate summit, COP26, is the first summit since the 2015 Paris Agreement where signatories have been obliged to update the targets they submitted as part of the deal—that’s why we’ve seen so many new ones set recently. Part of the negotiations in Glasgow revolve around how often countries should update targets in future. A group of around 50 countries, some of the most vulnerable to the impacts of climate change, are pushing for updates every single year. That would ramp up the pressure on those without solid plans.

Some climate activists have warned, though, that by setting net zero targets for far off dates, governments may succeed in distracting advocates and the public from their polluting actions in the present. Hale says he doubts it will work. “Even if an entity has set a target arguably for PR reasons, hoping to get people off their back for a little while, they are quickly realizing people are much smarter than that,” he says.

Activists and pro-climate business leaders and politicians will need to ramp up pressure once a target has been set to ensure it gets strengthened, though. “A target is obviously not sufficient to achieve those goals,” he says. “But targets have really clarified what the direction of travel is. And now, rather than discussing the goal, we’re discussing how quickly we can get there, which is a much more productive place to be.” 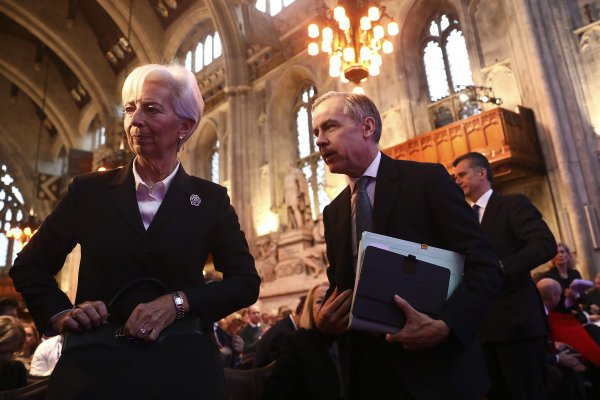