From the outside—and sometimes from the inside also—annual U.N. climate conferences known as COPs can seem like a bunch of aimless talk. For more than three decades, the U.N. has held these conferences, and the world is still on track for catastrophic warming. And so as 20,000 people, including around 120 world leaders, gather in Glasgow this year for COP26, I thought I would answer a very simple question: why does COP matter?

The simple answer—as anyone following climate news likely knows—is that the world has warmed around 1.1°C since the Industrial Revolution, and we’re dangerously close to passing the 1.5°C threshold that scientists have warned will bring dire consequences. Because carbon stays in the atmosphere for decades, we need a dramatic shift in direction essentially immediately.

But, of course, there’s more to the question than the science. Instead, it seems to me, the criticism centers on whether global climate talks are really an effective method of pushing for change and, ultimately, reducing emissions. COP detractors argue that a bunch of politicians talking about climate change and, at best, making non-binding agreements isn’t as effective as, say, pushing $500 billion in climate spending through Congress in the U.S., investors forcing oil companies to reduce spending on new fossil-fuel production or any number of more concrete actions.

I love to write about international climate politics, and there are several arguments I could make for why COP matters, from the voice it gives to the most vulnerable to the cooperation it fosters between countries that might otherwise be at odds. But today I want to look at just one reason: international climate discussions play a crucial role in setting the direction of travel.

To explain how this works, I want to look backward to the Paris climate talks—COP21. I was relatively new to the climate beat at the time, and one of the first things I learned was that the world really needed to limit temperature rise to 2°C above pre-industrial levels. That was the level where climate change was thought to get really bad—or so we were told. But in Paris, officials from some of the countries most vulnerable to climate change launched a vigorous campaign to change the target. The effects of climate change were already hitting them hard, and 2 degrees posed a clear existential threat, they argued.

After much negotiation, the vulnerable countries largely won that battle. The Paris Agreement called for holding temperature rise to “well below 2°C,” and the countries gathered in Paris called upon the U.N.’s climate science arm to research the effects of climate change at a 1.5°C limit. The resulting report warned that even that seemingly low level of temperature rise would be catastrophic and, in doing so, galvanized a push for a more ambitious climate agenda. Today, 1.5°C is the reference point for business leaders, government officials and activists alike.

A reference point may not sound like much, but it trickles down. Indeed, that 1.5°C target was extrapolated and turned into the goal of getting to net zero emissions by the middle of the century, which has been embraced in dozens of countries. The most intellectually honest of these have followed with 2030 targets that put them on a path to actually get there. Just take the E.U., for example, which rolled out a policy package over the summer that includes everything from sustainable aviation fuel to expanded carbon pricing, to meet the target. That package—it’s scope and timeline—is by extension the result of discussions that happened at COP six years ago.

The temperature target is the most obvious example, but other COP agreements on an array of guidelines and principles also continue to set the direction of travel for climate policy today. Developed countries have failed to live up to the commitment made at the 2009 COP to provide $100 billion in financing annually to their developing counterparts, but the pledge undergirds the nearly $80 billion in climate finance delivered in 2019. The Paris Agreement has no formal effect on corporations, and yet being “Paris aligned” has become a key indicator of whether a company is a sustainable investment. The Paris Agreement doesn’t really require countries to do much of anything—but nearly 120 countries submitted new climate plans as the climate pact suggests.

“The philosophy I had drafting the Paris Agreement was [to think] ‘how can we change the expectation?’” Laurence Tubiana, a key architect of the deal, told me last year. “You don’t have a forcing mechanism, you cannot have a government punishing anybody. So, the only one is people just believing that this will happen.”

Similar to past meetings, COP26 is unlikely to yield any firm binding commitment along the lines needed to keep the 1.5°C target within reach. But it can help accelerate things in the right direction. Enough momentum to scrap coal would signal to investors that it’s time to drop the fossil fuel. A commitment to end deforestation would put pressure on companies reliant on illegal logging. Even just reiterating the 1.5°C target with any credible path to get there would signal that governments are going to go deeper and, just maybe, try everything. None of this is guaranteed, but the possibilities should make COP hard to ignore for anyone who cares about climate change. 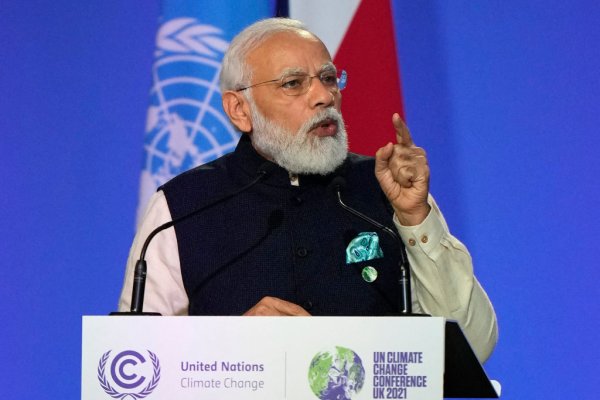 India Sets a Surprise Net Zero Goal for 2070
Next Up: Editor's Pick