Adele during her 'Saturday Night Live' monologue on Oct. 24, 2020
Will Heath/NBCU Photo Bank via Getty Images
By Eloise Barry

After six years of silence, British pop megastar Adele has at last dropped “Easy on Me,” the first single from her forthcoming fourth studio album 30. Since the release of her third album in 2015, the 33-year-old 15-time Grammy winner has gotten married and divorced and opened up about living with depression. Given that she is famous the world over for her heart-wrenching, personal ballads, six years of life will have undoubtedly provided ample material for more in that vein—and “Easy on Me” offers proof that fans looking for familiar comfort in that which they’ve long loved about Adele will find it in this project.

Here’s what to know about the new single, and about the long-awaited release of 30.

The singer teased a sneak preview of the single’s music video to fans on Oct. 5. Four days later, Adele sent social media into a frenzy as she played a clip with lyrics during an Instagram live, admitting she “might get in trouble for playing it.”

When the song and video finally dropped, they featured Adele in the powerful, emotive mode fans have come to love and expect. Sonically, “Easy on Me” is a melodic piano ballad with ample room for Adele’s vocals to shine and a booming chorus sure to be quickly memorized and belted out by her legions of fans, especially those in the throes of heartbreak.

Thematically, the song reflects on the end of a relationship. “There ain’t no room for things to change/ when we are both so deeply stuck in our ways,” she sings. “You can’t deny how hard I’ve tried/ I changed who I was to put you both first but now I give up.” It doesn’t take much to guess that the “both” in this lyric refers to Adele’s ex-husband and their child together.

She sings of having been “still a child/ didn’t get the chance to feel the world around me,” perhaps connecting her turbulent childhood to the breakdown of her adult relationship. She is vulnerable and introspective, tender with herself and ultimately at least a little bit hopeful.

What about the music video?

The five-and-a-half-minute video, rendered at first in black and white before dramatically blooming into deep fall colors, and directed by Xavier Dolan, features the singer packing up and heading out of a quiet country home with a “Sold” sign in front of it on a blustery day. With winged eyeliner, a trench coat, voluminous hair and razor-sharp nails, she takes a phone call from someone she calls “darling.” She gets into her car, puts a cassette in the tape player and begins to sing her wistful tune.

As she drives, pages of music fly off of her car into the wind, the past metaphorically shed, perhaps older versions of herself as an artist sailing away with them.

In a post shared on her Twitter account, Adele revealed that her new album, 30, will be released on Nov. 19. In a statement shared on social media, the singer said, “I was certainly nowhere near where I’d hoped to be when I first started [the album] nearly 3 years ago. Quite the opposite actually.”

She went on to share, in vague but vulnerable terms, more of her emotional state during the process of producing the project. “I’ve learned a lot of blistering home truths about myself along the way. I’ve shed many layers but also wrapped myself in new ones …[I] feel I’ve finally found my feeling again. I’d go so far as to say I’ve never felt so peaceful in my life.”

What has Adele said about the new album’s themes?

Adele confirmed speculation surrounding her new album’s name in a tweet: 30 will continue the numerical pattern of her previous albums, which reflect the age she was when she wrote them. Her 2008 debut was titled 19, her 2011 sophomore album was called 21, and her third, in 2015, was called 25.

In two coinciding interviews with Vogue U.S. and Vogue U.K.—Adele is the first cover star to appear on both editions during the same month—the singer divulged compelling details about the upcoming album.

She told interviewers that 30 is dedicated to her son, 9-year-old Angelo, whose father is her ex-husband Simon Konecki. She explained that she hopes the songs will one day help clarify to Angelo her decisions for divorcing his father, emotional territory he’s still too young to grasp.

When Angelo was 6, Adele told Vogue, he asked her: “Can you see me? Cause I can’t see you.” The child, Adele seemed to be saying, was using the word metaphorically, somehow aware of his mother’s emotional struggles. “Well, my whole life fell apart in that moment,” the singer said. “He knew I wasn’t there…That’s when I started sharing with him.” This interaction inspired Adele to record conversations she had with him, so she could make sure he was kept in the loop—snippets appear on a track on the new album written for him.

This is the key difference between 30 and Adele’s previous albums: It’s about “self-redemption,” an introspective journey into the singer’s faults, mental health and desires. She makes clear that it is neither a divorce nor a revenge record.

According to Vogue U.K., 30 is her most musically diverse album yet. One impassioned song documents her post-break-up dating experiences, replete with disappointing and emotionally unavailable men. “I wanted to put it on the album to show Angelo [how] I expect him to treat his partner,” she explained. “After going through a divorce, my requirements are sky-high. There’s a very big pair of shoes to fill.”

In a departure from her typical sound, one track features a catchy electropop beat, underscoring a period of post-divorce “self-destruction” and heavy partying in L.A. clubs. The album’s final seven-minute composition, however, invokes the Adele grandeur to which listeners are accustomed. It’s the ending song that Breakfast at Tiffany’s should have had, she told both Vogue interviewers—the movie was playing in the studio as she recorded it.

Unlike so many star-studded records these days, there are no featured artists on 30. “It’s not that I don’t want to,” Adele told British Vogue. “It’s not calculated. It’s just never been right for some reason.”

The star did return to her most trusted collaborators, however, including Greg Kurstin, who she worked with on 25, and Swedish hitmaker Max Martin (famous for, among other epic tracks, “…Baby, One More Time,” “I Want It That Way” and a bevy of Ariana Grande, Katy Perry and Taylor Swift hits). London-based producer Inflo also contributed, as did Swedish composer Ludwig Göransson, who won the Academy Award for the Black Panther score.

Although details of the rest of the album have been kept tightly under wraps, one thing is for sure: this is Adele’s most personal album yet. “I always say that 21 doesn’t belong to me anymore”, the singer told Vogue U.S. “This is my album. I want to share myself with everyone, but I don’t think I’ll ever let this one go.”

Adele is notoriously private, well-known for avoiding and playfully misleading reporters. This month’s Vogue interviews were her first dalliances with the press since 2016. Since then, her life has undergone several significant developments.

She wed her long-term partner and the father of her child, charity executor Konecki, in 2018, contrary to press reporting that it was two years earlier. The couple split in 2019—Adele said she is “embarrassed” that “it wasn’t very long”—and finalized their divorce earlier this year.

The split was amicable, however. Konecki lives across the street from Adele’s Beverly Hills home base in a house she bought, and the pair share custody. They kept the split a secret for so long to protect their son, Adele told British Vogue.

There was no one reason for the break-up. “It just wasn’t right for me anymore,” the singer said. “I wasn’t miserable miserable, but I would have been miserable had I not put myself first.” Yet the pair still shares a strong bond. “I’d trust him with my life,” she told Vogue. “I definitely chose the perfect person to have my child with.”

The singer is happily in a new relationship with NBA sports agent Rich Paul. The pair met through mutual friends, but only got together a few months ago. Adele was pictured with the 39-year-old, who has signed the likes of Lebron James, at a basketball game in July. She has since posted a photo with him on Instagram. “We’re very happy,” she told British Vogue.

Adele also got real about her recent struggles with her mental health—the Vogue U.S. profile refers to the “Year of Anxiety” when she split with her ex. She got through it, she said, with “a lot of meditation…a lot of therapy” and going to the gym. The singer expressed annoyance at the intense press scrutiny over her weight loss, which she said was due to a strict exercise regime during lockdown rather than any diets. “I realized that when I was working out, I didn’t have any anxiety,” she told Vogue U.S.

Part of her therapy involved returning to feelings of abandonment in her childhood—her father, Mark Evans, who died of cancer in May, left her mom soon after Adele was born. The singer’s relationship with Evans was strained—he had sold stories about her to the press—but she said they “got [their peace]” before he died, and she played him her new album. “One thing that definitely happened in my divorce was that it humanised my parents for me,” she said.

Music has been a source of comfort for the singer from a young age. Writing her latest album was no exemption. “I definitely feel like when my life is spiralling out of control I want to be in the studio because no one can get me,” she told British Vogue. “[It’s] my safe space.” 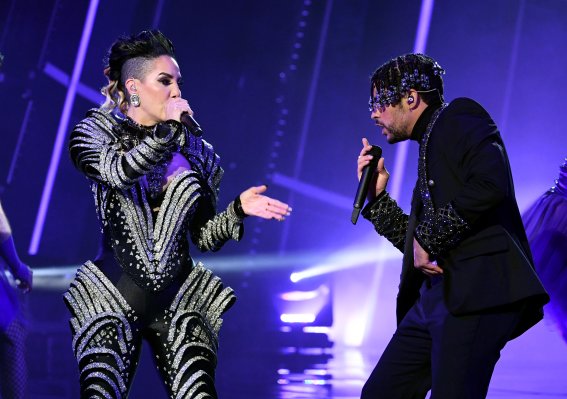