This Is the White House's Plan to Take on Facebook

Facebook whistleblower Frances Haugen’s testimony this week on Capitol Hill turned the Klieg lights on the social media platform’s algorithm that, by design, amplifies dangerous disinformation and lures people to spend more and more time scrolling. The question now is what the Biden Administration will do about it.

White House officials know that the momentum generated by Haugen’s testimony will fade over time and the window of popular support for major structural changes to the technology landscape will close. “The White House, like everyone else in Washington, recognizes that the tide is high and the time for action is now,” Tim Wu, special assistant to the president for technology and competition policy, said in a statement to TIME. White House officials are “distressed” by Haugen’s revelations that social media companies’ products are targeting children, Wu said, and “the era of ‘let’s just trust the platforms to solve it themselves’ needs to be over.”

President Joe Biden wants Congress to strengthen antitrust laws, make sure privacy is better protected, and rewrite Section 230 of the Communications Decency Act to make tech companies more accountable for illegality happening on their platforms, according to Wu. (Legislation addressing some of those actions passed the House Judiciary Committee in June.) White House officials also are looking closely at the Child Online Protection Act, an existing law, to see if the Biden Administration can do more to ensure platforms are complying with those provisions to prevent harming children.

But Biden and congressional lawmakers are juggling competing priorities and slow regulatory processes that threaten to delay or dilute meaningful reforms to take on Big Tech. Congress is consumed with the triple tasks of trying to pass trillions of dollars in infrastructure and social program spending, funding the government beyond Dec. 3 and avoiding a self-inflicted debt default. While both Republicans and Democrats were alarmed by the detailed revelations on Tuesday that Facebook—which owns both Instagram and WhatsApp—promotes online content in a way that contributes to body image issues and mental health crises among children and teenagers, translating that into law will take time in a legislative calendar that is short on it.

In July, Biden encouraged the Federal Trade Commission (FTC) to create a raft of new regulations intended to weaken the ability of technology companies to buy up competitors, hoard data and further consolidate their control over ever larger swaths of our digital lives. But those also take time to roll out, and will likely face legal challenges. That means consumers won’t feel a difference anytime soon.

The White House hopes the FTC, which is designed to operate independently, will use its powers to regulate how much private data tech companies collect and use to target content, as well as look closely at whether social media platforms do enough to prevent deceptive and unfair practices, things the White House believes are within the FTC’s legal purview to regulate. “The FTC is an independent agency and so it is fundamentally up to them. But we hope that the FTC will adopt rules that will limit the ability of platforms to unfairly collect data that is largely unrelated to any product offerings, which should affect the ability to hook children and everyone else,” Wu said.

FTC rules often face legal challenges, and few areas are more contentious at the moment than federal regulation of tech companies. Which means that even if new rules are issued, they could be tied up in lengthy court battles before the Biden Administration is allowed to implement them.

Regulations aren’t the Biden Administration’s only weapons. The Department of Justice can bring antitrust cases against tech companies, and Biden’s pick to be the top antitrust attorney is a firebrand lawyer named Jonathan Kanter, who made his name in private practice taking on massive tech companies like Google and Apple in court. Kanter spoke at his confirmation hearing before the Senate Judiciary Committee on Wednesday, saying he would focus on protecting competition for businesses. “I’ve been a strong proponent of vigorous antitrust enforcement in the technology area, among others,” Kanter said. The Senate is expected to vote on Kanter’s nomination soon.

Read More: Facebook’s Horrible, No Good, Very Bad Week — And What It Means for Antitrust Reform

There’s an old saying in Washington that personnel is policy. And the Biden Administration has signaled a commitment to going after the abuses of tech companies by hiring what tech companies consider fire-breathers into key positions. That includes Kanter, Lina Khan as chair of the FTC, who is considered one of the country’s leading legal scholars on tech monopolies, as well as Wu, who as a law professor at Columbia University wrote the “The Curse of Big Business: Antitrust in the New Age” on the problems with tech companies holding such large parts of the digital market.

Despite this formidable lineup, tech policy experts say there’s concern that the White House hasn’t shown enough clear, forceful leadership on ways to address all the different challenges that large tech companies present to democracy, freedom of speech and public health. Even within the White House, for example, officials working on tech policy are dispersed through multiple offices: staff on the National Security Council manage cyber security concerns and technology’s impact on democracy and disinformation, while at the National Economic Council, Wu and others are tackling the lack of competition in the tech space.

It remains to be seen whether President Biden will take advantage of this opportunity to take additional actions from the White House, or whether he’ll focus elsewhere and leave Facebook to others. 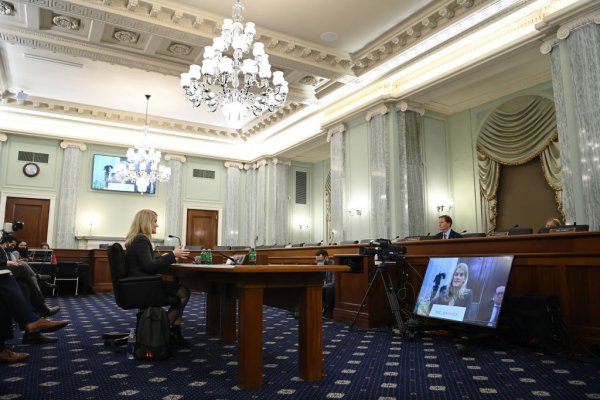 How Fixing Facebook's Algorithm Could Help Teens—and Democracy
Next Up: Editor's Pick