The Facebook Whistleblower Revealed Herself on 60 Minutes. Here's What You Need to Know

The Facebook whistleblower who caused a firestorm after releasing internal documents detailing how the company failed to address negative effects of its social media products came forward Sunday night on CBS’ 60 Minutes.

Frances Haugen, a data scientist who worked at Facebook as a product manager on the Civic Integrity team, said the social media platform has lied to the public about resolving hate and violence to increase traffic and engagement—and in turn, profit.

Among the allegations she leveled at Facebook was that the company bears responsibility for the Jan. 6 U.S. Capitol riot, because it reversed some of its safeguards against misinformation after the 2020 election.

“Facebook has realized that if they change the algorithm to be safer, people will spend less time on the site, they’ll click on less ads, they’ll make less money,” Haugen told 60 Minutes correspondent Scott Pelley.

Haugen, 37, joined Facebook in June 2019 with hopes of improving how Facebook deals with misinformation after she lost a friend due to conspiracy theories online. By April 2021 she resigned, and leaked a massive trove of Facebook’s internal documents and research to the Wall Street Journal.

She previously worked at other Silicon Valley tech giants, including Google and Pinterest, according to her LinkedIn profile. But Haugen told Pelley Facebook was “substantially worse” than anything she’s seen before when it came to putting user engagement ahead of the safety of its products.

She submitted tens of thousands of those documents to the Securities and Exchange Commission and to Congress. She was also the primary source of the Journal’s Facebook Files stories last month that exposed how Facebook’s algorithm fosters anger to drive engagement, how it favors high-profile users, and how Instagram made nearly one-third of teenage girls who use it feel worse about their bodies.

Jeff Horwitz, the Journal tech reporter behind the Facebook Files stories, also confirmed Haugen’s identity after she revealed herself on the show.

The Senate has launched an investigation into the controversial internal research and how Facebook tried to obfuscate it. Haugen is scheduled to testify before the Senate Subcommittee on Consumer Protection, Product Safety, and Data Security on Tuesday.

What are her biggest revelations?

Haugen detailed many of the allegations that had already appeared in the Journal’s Facebook Files. But she expanded on some of the points in her 60 Minutes interview. Here are some of the biggest revelations.

Haugen told 60 Minutes that shortly after the 2020 U.S. election, Facebook decided to dissolve the Civic Integrity team—a move which she believes helped to encourage the Jan. 6 U.S. Capitol riots, which were based on the lie that the U.S. election had been stolen.

“They basically said, ‘Oh good, we made it through the election. There wasn’t riots. We can get rid of Civic Integrity now,’” she said. “Fast forward a couple months, we got the insurrection.” She added that she felt differently about the company after that, saying that she no longer trusted Facebook to invest in the safety of its community.

Facebook beefed up safety systems to reduce misinformation in the run-up to the contest between President Donald Trump and Joe Biden, but Haugen said these systems were either downgraded or turned off after Biden won, in order to prioritize growth. “That really feels like a betrayal of democracy to me,” Haugen added.

Vice President of Global Affairs Nick Clegg denied the “ludicrous” allegations. “The responsibility for the violence on January 6, the insurrection that day, is squarely on the people who inflicted the violence and those who encouraged them,” he told CNN’s Brian Stelter.

The internal research Haugen leaked also revealed negative effects of Facebook’s Instagram app on teen girls and young women. Haugen said she was particularly struck by the company’s research that Instagram was worse for mental health than other social media platforms.

“It actually makes them use the app more. And so, they end up in this feedback cycle where they hate their bodies more and more,” Haugen said.

Facebook’s impact around the world

The whistleblower also said she believes Facebook does not invest enough in safety systems to accommodate all the languages that the platform supports.

“Every time Facebook expands to a new one of these linguistic areas, it costs just as much—if not more—to make safety systems for that language as it did to make English or French,” Haugen said. “The economics just doesn’t make sense for Facebook to be safe in a lot of these parts of the world.”

In 2018, Facebook admitted it failed to stop the use of its platform “to foment division and incite offline violence” amid the alleged genocide of Rohingya minority people. But Haugen said Facebook knows that allowing hateful, dangerous content helps users to keep on the platform.

Facebook has begun to hit back at Haugen’s allegations, issuing a lengthy statement in response to the 60 Minutes interview. “Every day our teams have to balance protecting the right of billions of people to express themselves openly with the need to keep our platform a safe and positive place,” said Lena Pietsch, Facebook’s director of policy communications. “We continue to make significant improvements to tackle the spread of misinformation and harmful content. To suggest we encourage bad content and do nothing is just not true.”

Amid a spate of criticism about Instagram’s effect on children’s mental health and safety, Facebook announced on Sept. 27 that it will put the development of its Instagram Kids app on hold.

The social media giant also took to its own blog to criticize what it calls the Journal’s “deliberate mischaracterization” of Facebook’s actions against misinformation in its reporting. Vice President of Global Affairs Nick Clegg criticized the paper for “cherry-picking” from the documents Haugen leaked.

“Facebook understands the significant responsibility that comes with operating a global platform,” Clegg said. “We take it seriously, and we don’t shy away from scrutiny and criticism. But we fundamentally reject this mischaracterization of our work and impugning of the company’s motives.”

What is Haugen trying to achieve?

Haugen clarified that she has nothing against Facebook founder Mark Zuckerberg, adding that she knows he did not intend on creating a “hateful” platform.

“I have a lot of empathy for Mark,” she told Pelley. “But he has allowed choices to be made where the side effects of those choices are that hateful, polarizing content gets more distribution and more reach.”

Shortly after the show aired, Haugen posted on her Twitter account that she believes “we can do better.”

“Together we can create social media that brings out the best in us. We solve problems together – we don’t solve them alone,” she tweeted. 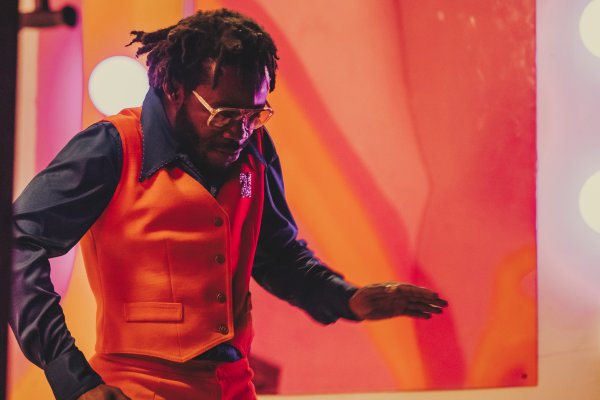 Demi Adejuyigbe on His Final 'September' Dance Video
Next Up: Editor's Pick