Senate Minority Leader Mitch McConnell walks into his office at the Capitol in Washington on Oct. 06, 2021.
Kevin Dietsch—Getty Images
By Philip Elliott

One involved a global economic recession that would be triggered if he and his fellow Republicans refused to let the United States pay the government’s bills in the coming weeks. The other wasteland was a Senate without a filibuster where the party in power—notably, not his—could get its way with a simple majority vote.

Given his options, the Republican Leader of the Senate opted to preserve the obstructionist tactic of the filibuster and relented on the borrowing cap—at least for a few weeks. And when the new deadline gets here, he may yet make it painful for Democrats.

The United States faced an Oct. 18 deadline to finish a one-page change to the borrowing limit, known around Washington and Wall Street as the debt ceiling. It’s a vestige of World War I and has routinely been changed by both parties as a routine matter for most of the last century. In fact, the ceiling has been raised 78 separate times since 1960.

But starting in 2006, what had been a routine vote for lawmakers started to carry weight. In that year, Democrats—including then-Sen. Joe Biden—used the debt-ceiling vote to lodge an election-year protest against George W. Bush’s tax cuts and heavy military spending. Democrats, it must be noted, did not filibuster and the hike of the artificial limit cleared with a 52-48 margin. They protested, but didn’t filibuster.

Now, 15 years on, the debt ceiling has trended into the partisan gutter like so much else in D.C. In 2011, the newly elected Republican majority in the House led a revolt that threatened a credit downgrade as both parties fought for the moral high ground on spending. Ultimately, a visibly peeved Obama signed a deal that reduced deficits by more than $2 trillion over the span of a decade without any new taxes. Two years later, House Republicans forced a government shutdown in an attempt to derail Obamacare and linked the looming mid-shutdown default deadline to it. In that case, McConnell stepped in, dispatched Sen. Lamar Alexander to negotiate a climb-down for the GOP and the Republicans essentially retreated in defeat.

Now, with Democrats in control of the House, the Senate and the White House, McConnell is trying to extract as big of a political price as possible. For months, he insisted Republicans would force Democrats to use a procedural loophole to pass the debt ceiling with just Democratic votes. Otherwise, they’d have to beat a 60-vote bar to end a filibuster.

Democrats said that they were not going to use the loophole, known as reconciliation and the only thing still giving life to Democrats’ unrelated infrastructure plan. They said they didn’t have enough time to make that work before the looming deadline. And, after all, Democrats had given their support three times during President Donald Trump’s tenure to change the credit card’s breaking point. Once again, Democrats were looking for fair-play from McConnell, the politician who refused to consider Merrick Garland’s nomination to the Supreme Court for a record 293 days.

Early this week, the stand-off appeared to be inching toward doomsday: Oct. 18. Given the enormous implications of a default—six million jobs gone, a 9% unemployment rate and a $15 trillion slash to the stock market, according to Moodys—some Senators started to consider ditching the filibuster to be a real option. If all of the Democrats were in agreement, they could nix the archaic rule that requires three-fifths of the Senate to vote together to end debate on a matter—in other words, a filibuster talk-a-thon meant to jam-up progress.

Progressives have been agitating to get rid of the filibuster, arguing too much of the Democrats’ agenda remains in park because the governing minority can gum it up. So far, institutionalists, including Biden, have resisted such talk, but even the President on Tuesday said dumping the filibuster was “a real possibility.” When even someone so steeped in Senate tradition wavers on the filibuster, it makes even the most stubborn of pols rethink their fortifications.

A day later, McConnell seemed to do the unthinkable, at least from afar. McConnell offered a temporary extension of the debt ceiling into December, to keep paying the bills already racked up. Sen. Elizabeth Warren said McConnell had “caved,” an assessment that Democrats seemed eager to amplify.

But others were looking around the bend; Sen. Mazie Hirono called the offer “bullshit” and spotted the trap. Because if you look a little closer at McConnell’s exact wording, it becomes very clear that he may just be boiling a bigger tea kettle to the same painful temperature to scald the Democrats. Even in offering a stopgap save, McConnell kept the focus on Democrats’ control; the deal, he said, would ​​“protect the American people from a near-term Democrat-created crisis.”

To be sure, the extension would give Democrats a breather to regroup and to pivot to their infrastructure chase. But it doesn’t change the fact that a long-term extension of the debt ceiling could still elude them. Senior Republicans say they will still force Democrats to use a piece of legislative trickery to raise it come December, something that is complicated, time-consuming and full of fraught votes on political minefields that will never become law. And in doing so, Republicans will force Democrats to put a hard number as their limit on borrowing to comply with the Senate rules on reconciliation. It’s a lot easier to ding a rival for a hard number like $30 trillion than a date, which is how these things usually get scheduled in normal procedure.

McConnell seemed to telegraph that his temporary shift wasn’t a concession that Democrats should necessarily celebrate. By moving the deadline, it “will moot Democrats’ excuses about the time crunch they created and give the unified Democratic government more than enough time to pass stand-alone debt limit legislation through reconciliation,” McConnell said.

In other words: he’s still going to make Democrats go it alone. But when the next deadline hits, it may be on the heels of a massive $3.5 trillion spending plan. And while the current debt ceiling crisis has nothing to do with that effort, it could be tough to separate the two in many voters’ minds. Plus, as an added bonus, the new deadline matches up with a deadline to keep the government’s lights on and the holiday season. It’s a three-for-one dare that may have Democrats asking Santa for a change in the rules after all. 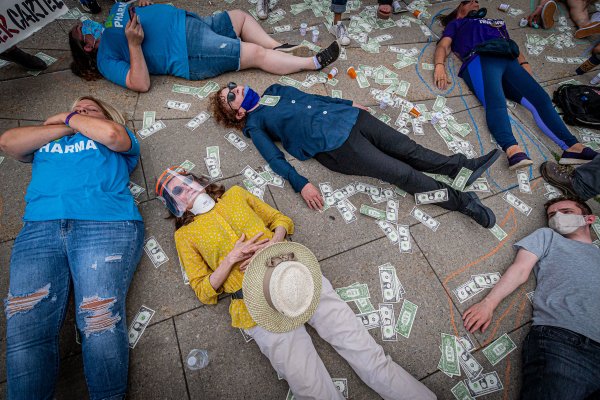 Execs Pocketed Millions During Meltdown
Next Up: Editor's Pick