If Jung Ho-yeon were to enter Squid Game as a contestant, the dalgona challenge—in which one must carve out a shape engraved onto a brittle disc of honeycomb using only a needle—would be where she’d meet her end. Just for fun, Netflix Korea had given her one such treat etched with the platform’s logo, a large “N.” As in the Korean thriller series, Jung’s task was to extract the design without cracking it. “I failed. Two times,” Jung laughs as she holds out two fingers emphatically. “I thought that it’s easy but it wasn’t at all.” In the third episode of Squid Game, Jung’s character Kang Sae-byeok receives a similar candy, albeit with a less daunting shape, a triangle. But unlike Jung, neither Sae-byeok nor any of the 456 players who entered the competition for a chance at 45.6 billion won (roughly $38 million) get a second opportunity at the games. If you fail on your first try, you die.

Squid Game, which premiered on Sept. 17, is on track to become Netflix’s most watched show of all time, according to the company. Netflix says the nine-episode drama reached no. 1 in 90 countries within 10 days, with 95% of viewership originating from outside of South Korea, where the series was filmed and takes place. Written and directed by Hwang Dong-hyuk, the show follows cash-strapped contestants as they battle in deadly matches adapted from popular Korean children’s games. In deliberately jarring juxtapositions, the drama features plenty of gore and violence against brightly colored playground-inspired backdrops and eerily upbeat music. The story centers on Seong Gi-hun (Lee Jung-jae), a divorced father and gambling addict targeted by loan sharks who, after joining the game, meets hundreds of others who have also hit rock bottom.

One of them is Sae-byeok, a North Korean defector who viewers soon learn is driven by the goal of winning the prize money to fulfill a heartfelt promise she made to her younger brother. But you wouldn’t know this just by looking at her steely exterior. When we first meet Sae-byeok, her gaze is cold and she barely utters a word. Only as time passes does it become clear that she yearns for human companionship and is willing to risk her life for a chance at reuniting her family.

Contestants in one challenge of Netflix's Squid Game
Courtesy Netflix

Read more: The 15 Most Anticipated Korean Dramas of 2021

Jung has seen her star rise suddenly thanks to her nuanced performance of Sae-byeok. Since the series debuted, her Instagram following has grown from just over 400,000 to more than 15 million. Squid Game marks the acting debut for the 27-year-old model, who previously competed in Korea’s Next Top Model in 2013, where she placed second. Since then, Jung has walked in multiple international fashion shows and regularly traveled abroad for brand campaigns. She signed with Saram Entertainment in January 2020 to pursue her ambitions as an actor and, the very next month, auditioned for the role of Sae-byeok.

Over Zoom and in part via a translator, Jung talked to TIME about being cast for Squid Game, relating to Sae-byeok’s sense of loneliness and how she envisions the future of her acting career.

This interview has been edited and condensed for clarity and contains mild spoilers.

TIME: What was the audition process like and how were you cast for the role?

Jung: I was modeling in New York City [for New York Fashion Week in 2020] and this was the first audition script that I received after moving to the acting agency. It had been less than a month since I had started working with them. I remember feeling very nervous but I wanted to prepare for it as much as possible, so I filmed my audition video for three whole days except for the time when I was eating.

Even after I met the director, I didn’t really think that I would become part of the project, but he reached out to me and I was very surprised. Back then, rather than feeling happy, I felt anxious and scared that this was gradually becoming a reality.

What was your reaction when you read the script for the first time?

I read it all in one sitting. I started reading the script probably around 9, 10 P.M., and it was quite lengthy but I managed to read it all until very late in the night. I laughed a lot and cried a lot. So I felt excited about the project but at the same time I was worried whether I could pull it off, and since the script was so enthralling, I read it wishing that I would not weigh down on the project but have something to bring to the table.

What was it that made you cry?

The scene that made me cry was when Ji-yeong (Lee Yoo-mi) and Sae-byeok were talking to each other. I felt that the lines themselves were very well written by the director, and I saw this interview where he said that he envisioned this scene to be one with two people who are the most innocent out of all the contestants.

Yes, I watched episode 6 [where the scene takes place] while on a plane and cried off all my makeup.

Same. When I read the script I was sobbing [imitates loud sobbing]. It was one of the big excitements for me to meet Ji-yeong in person. Because at that time I had to imagine Ji-yeong from the script, but when I met [Lee] at the table reading, I just felt that she’s the one.

I think that Sae-byeok and I are similar in that we have experience living somewhere far from home, which means that even when you feel very happy or sad, you can’t share those emotions with friends and family but have to keep it to yourself. I experienced this loneliness when I was modeling overseas so in this regard I could really relate to her. I always traveled by myself on the airplane, stayed at hotels by myself. Even though I got some big campaign, I couldn’t celebrate with someone else. I just stayed at the hotel, had a glass of wine and congratulated myself. That kind of loneliness makes me stronger, and I can feel [Saebyeok’s] strength came from that loneliness.

And what was different was, I think I was a person that lived a life relatively centered on my personal interests, whereas Sae-byeok puts other people before herself to the point where she’s willing to sacrifice her life for her family. So it was a little difficult to relate to her in this aspect at first, but after playing the role of Sae-byeok I think I came to view the meaning of friends and family a little differently.

Director Hwang has said that he wanted to write a story that was “an allegory or fable about modern capitalist society.” Why do you think the theme of capitalism in the show has resonated widely, both in Korea and beyond?

It’s probably because economic inequality is widening and we’re starting to have doubts about the capitalist system. Especially [with] COVID, it’s becoming more and more difficult to live in a capitalist society. But I think the reason why this show is so popular is because it doesn’t criticize capitalism in a grim manner but adds a twist to it with a witty touch, with the visuals and everything. I think this is why people are resonating with it so much.

You made your acting debut with Squid Game. What was the most difficult part in the filming process?

It was my first time acting and we started filming when I had not yet overcome my anxiety and nervousness. Because of all the pressure, I kept forgetting to breathe. So I tried to focus on breathing to shake all the anxiety off in order to, maybe not bring out my best performance but at least try my best in every scene. It’s very hard to name one thing that was the most difficult but I think it would have to be breathing.

When did your interest in acting start? What made you sign with the acting agency in 2020?

Acting is something I had been thinking about all the time, though not seriously. As I started modeling overseas, I started to get a lot of alone time which I spent watching films or reading books. I think this gradually made me want to express myself onscreen as well. Whenever I was alone while modeling overseas, I would always think about who I was and what it meant to be a human being and I personally think this is what eventually triggered my desire to act, and brought me to sign with my acting agency.

What has it been like to experience this new level of fame from Squid Game? Are there changes to your daily life?

First of all, I find everything very astonishing. The astonishment that things can change so much over such a short span of time. And I also feel grateful that so many people worldwide love Sae-byeok as much as I love her. And what has changed? I think it would have to be that not only me, but also my Instagram friends, have experienced an increase in their followers. They would call me to say that their follower count jumped this much. They feel happy about that and them saying that it is all thanks to me makes me happy and grateful that we’re sharing this moment together.

Going forward, how are you planning to divide your time between acting and modeling projects?

At the moment, I don’t exactly have plans. We’re receiving so much love and support and there are many offers but I just wish that I would be able to work with people who I trust and feel comfortable around. I always try to take it one step at a time and I’m not the kind of person that works toward a big goal. So my plan at the moment is to process what’s going on and to do my best every step of the way. With time, I believe, a day would come when people have their own definitions of Jung Ho-yeon as an actor. Maybe two years later, people can define me as this kind of person, that kind of actor, that kind of model. I’m very open to being defined.

—with reporting by Aria Chen 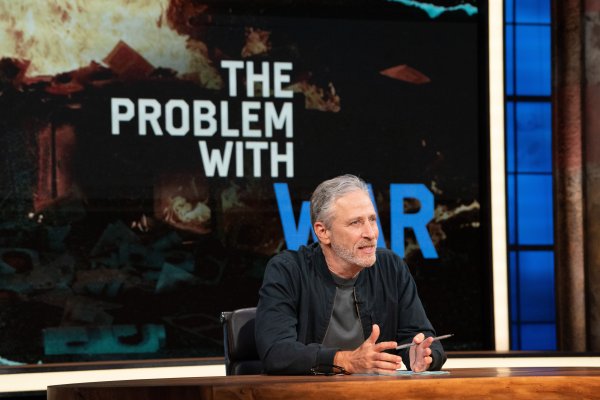 The Problem With Jon Stewart Could Be Great, If It Ever Catches Up to the Present
Next Up: Editor's Pick