More than 50,000 film and television workers voted to authorize a union strike this weekend, calling attention to exhausting working conditions in Hollywood and setting the stage for a massive potential shutdown of film and TV sets across the country.

The International Alliance of Theatrical Stage Employees (IATSE) represents an array of film professionals, including cinematographers, camera operators, hair stylists, makeup artists and script coordinators. Union members say that working conditions, which have long been difficult, have been exacerbated by the pandemic and a streaming era in which demand for content has skyrocketed. Through this strike authorization, they are demanding better wages, longer rest periods, a bigger cut of streaming profits, and a level of respect they say they are not treated with.

“Our people have basic human needs like time for meal breaks, adequate sleep, and a weekend,” IATSE president Matthew Loeb said in a statement. “For those at the bottom of the pay scale, they deserve nothing less than a living wage.”

The strike comes at the end of a three-year contract between IATSE and the Alliance of Motion Picture and Television Producers (AMPTP). Negotiations for a new contract turned acrimonious this summer before falling apart, with each deadline (July 31, then Sept. 10) sailing by without an agreement. Between Oct. 1 and 3, members of IATSE voted overwhelmingly for the strike: the union announced that 90% of the 60,000 IATSE members who received a ballot voted, and that 98% of those ballots were cast in favor. Ballots were cast by 36 of IATSE’s local unions, including in California, Georgia and New Mexico, with none of them voting less than 96% in favor of the strike.

If the strike moves forward, it would be the first major walkout of Hollywood workers since World War II, when a work stoppage led to violent clashes with strikebreakers outside the Warner Bros. Burbank studio. It would also be one of the biggest labor strikes overall of the last two decades.

In the lead-up to the vote, IATSE received support on social media from high-profile actors including Kerry Washington, Seth Rogen and Ryan Reynolds, as well as politicians like Elizabeth Warren. Perhaps even more impactful than the celebrity support, however, was an Instagram account that posted anonymous stories from crew members. IA_Stories, which now has 142,000 followers, posted stories of 20-hour days, of not being allowed to use the bathroom and of being on call 24/7. One writer recounted a time when producers refused to shut down a production despite someone dying from an untreated health condition in the middle of the season.

The account and the ensuing campaign have emboldened others to speak up publicly. Some have described not having lunch breaks for 40 days. Others have focused on the routine experience of driving sleep-deprived after spending hours of being on their feet. Paul Rodriguez is a film worker who has worked for 15 years in camera and lighting departments as a gaffer, grip and more; he’s recently worked on shows like Insecure and The L Word. He says that in his experience, being on set for 12 hours is “a light day of work.” “A few times a week, you’re facing the issue of if you’re going to fall asleep and die driving home or not,” he says.

Rodriguez also says that safety is a major concern for crew workers. (Improved benefits are also one of the main contentions in the current negotiation.) In January, he hurt his back and wrist from holding heavy cameras nonstop, which put him out of commission for three months. “When I came back, I was in excruciating pain,” he says. “It makes me wonder, why am I even doing this?”

While film workers like Rodriguez say that working conditions have always been difficult to handle, the combined pressures of the pandemic and the current streaming market have exacerbated things considerably. At the onset of the streaming industry over a decade ago, IATSE negotiated with ascendant streaming platforms to allow them worker subsidies and flexibility around work rules, hoping that they would provide more jobs for workers. But while those discounts are still in place, streamers are now as powerful as anyone in the industry—and platforms like Netflix, Amazon and Disney made billions of dollars in profit with everyone stuck at home during the pandemic, proving that demand for content is higher than ever. ”IATSE members have contributed their skill and artistry to these projects while the budgets have exploded,” the union wrote in an August statement. But “on some New Media projects, members are not even paid a specific scale wage or credited with pension hours.“

“There was a time where there was a love and healthy competition within the film industry and the crews were respected,” says Malakhi Simmons, a member of IATSE who has worked in lighting since the ‘90s. “In the present day, I think a lot of the streamers are looking at it more from the sense of, ‘It’s a business and the crew is just a line item.’ Our members are tired and they’re angry: They’re working these long hours, but now we’re doing them in a mask and without breaks, for the most part. ”

After lying dormant for months, studios and TV networks are anxious to make up for lost time, and have restarted productions in full force. IATSE members say that companies are trying to squeeze productions into half the amount of time they used to allow.

A strike isn’t necessarily imminent: there will be several more weeks of negotiations, or attempted negotiations, between IATSE and the AMPTP. The AMPTP says that the pandemic severely cut industry profits last year, and they are hoping to receive concessions from the union, like not having to pay a fine for when workers miss their lunch break. Political pressure is mounting on the AMPTP to make a deal: more than 200 state and federal Democratic lawmakers have signed letters to the organization’s president Carol Lombardini to sign a deal averting a labor stoppage.

But if negotiations fall through, an IATSE strike would halt a wide array of productions across the U.S., including Netflix shows, daytime soaps, and recurring shows like Saturday Night Live and The Tonight Show. (Workers for cable networks like HBO and Showtime operate under separate contracts.) As Rogen wrote on Twitter: “Our films and movies literally would not exist without our crews.”

Simmons says he is heartened by the unity that the union showed in authorizing the strike, and hopes that they will be able to leverage this collective power in order to get a favorable deal at the bargaining table and avoid a work stoppage. “We want to get back to work, and we all love what we do,” he says. “A lot of the magic and creativity you see often comes from the hundreds of names that aren’t getting the top billing or at the awards shows. It’s time these studios and networks respect their crew members with fair wages and reasonable rest.” 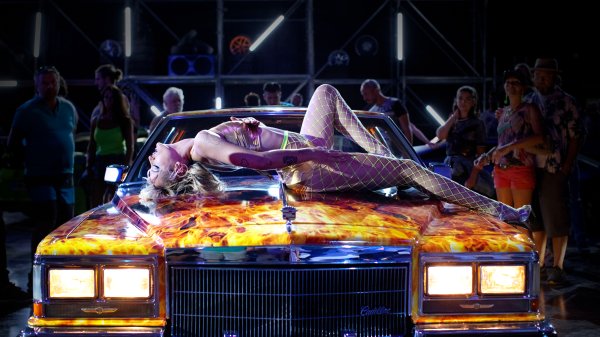 Titane Strives to Shock, But It's Running on Empty
Next Up: Editor's Pick