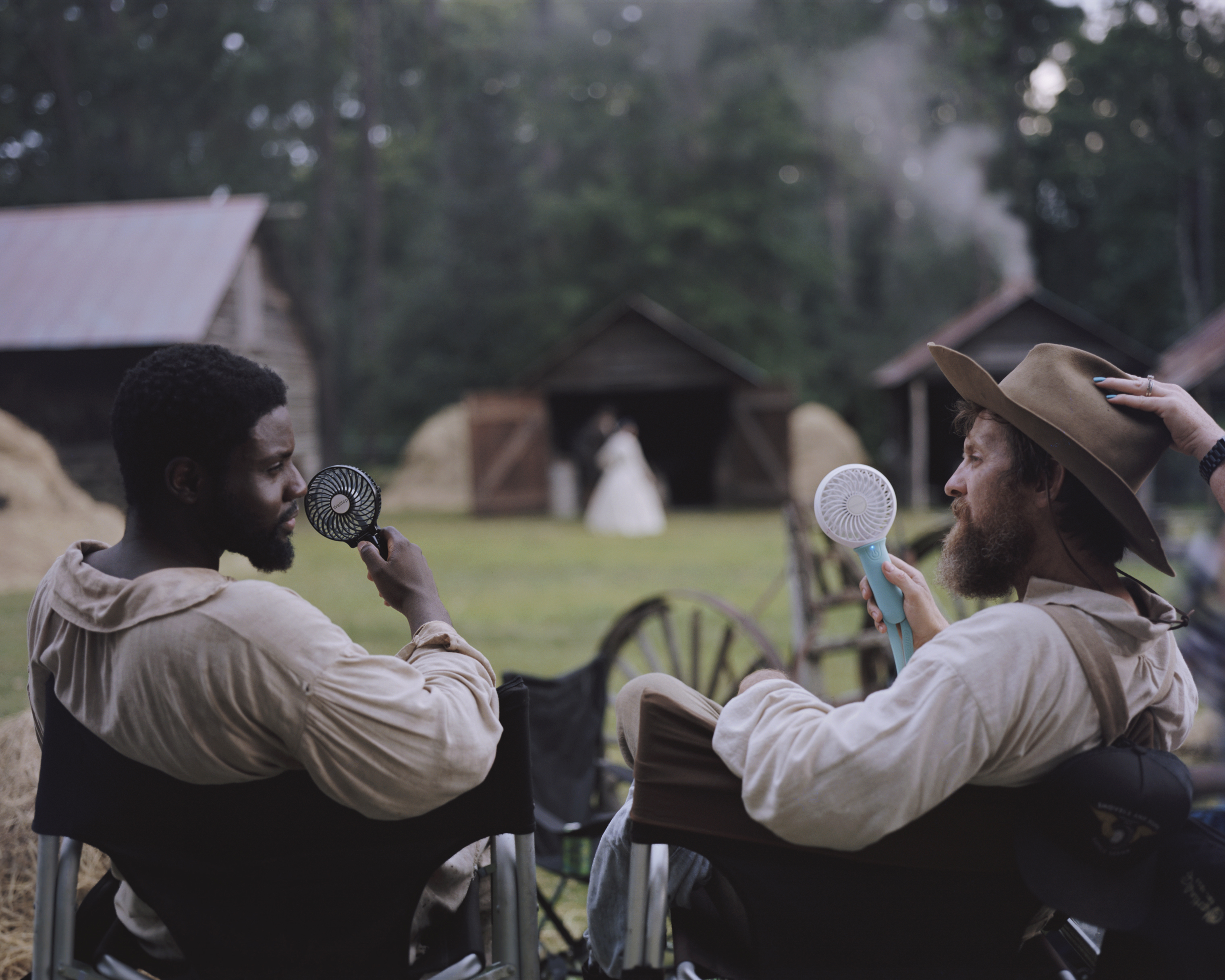 Dayo Okeniyi, left, and Brad Carter on the set of Emperor, an upcoming historical drama produced by Freedom Run Films. Other historical films like Glory and Remember the Titans have also taken advantage of Georgia’s timeless landscapes.
RaMell Ross for TIME

How Georgia Became the Hollywood of the South: TIME Goes Behind the Scenes

By Eliana Dockterman | Photographs by RaMell Ross for TIME

When The Walking Dead started filming in Senoia, Ga., in 2011, six stores were open in the 4,000-person town. “It was dying,” says Lee Thomas, deputy commissioner of the Georgia film office. That’s exactly what AMC wanted. In fact, the creators of the hit zombie show wanted Senoia to look completely dead—no cars on the streets, lights turned off, lawns left unmowed. But by killing the town, The Walking Dead brought it back to life.

The production team hired hundreds of crew members from the area. It put up the cast in local hotels. It hired local vendors to serve food, supply lumber and build the sets. By the end of the third season, all 50 storefronts on Senoia’s main street were occupied. An entire economy sprang up around Walking Dead tourism, including the Waking Dead Café; a restaurant opened by Norman Reedus, one of the show’s stars; and tours led by guides in zombie makeup.

The crew adjusts a lighting balloon on the set of Emperor in Springfield, Ga.
RaMell Ross for TIME

While Hollywood remains the heart of the film industry, Georgia has staked a claim as its Southern campus. In 2016, more major feature films were made in Georgia than in California, according to data from the Los Angeles film office. Movies filmed in the area have dominated the box office in 2018, thanks to Marvel Studios’ recent migration to the Peach State: parts of Black Panther, Avengers: Infinity War and Ant-Man and the Wasp were all shot in Atlanta.

Georgia has been working to attract Hollywood since 2008, when then governor Sonny Perdue signed a generous tax incentive for film productions. Thomas says officials lobbied for the measure after the state lost the production of Ray, the biopic about Georgia native Ray Charles that won Jamie Foxx an Oscar, to Louisiana. Georgia now offers a 20% incentive on productions of $500,000 or more, plus an additional 10% if the film adds a peach logo to its credits. The incentives are similar to those in states like New York and Louisiana, but in Georgia, unlike those states, the law has no end date.

Actor Issa Rae in between takes on the set of Universal Pictures’ Little on location in Atlanta. Thirteen-year-old black-ish star Marsai Martin came up with the idea for the film about a woman who gets to relive her youth.
RaMell Ross for TIME

In 2007, the film industry spent $93 million on productions in Georgia. In 2016, it spent over $2 billion. In the past decade, the tax perk has attracted the Hunger Games franchise, the Fast and Furious movies and superproducer Tyler Perry, who has made the state his base. Television hits like Stranger Things, critical darlings like Atlanta and reality series like The Real Housewives of Atlanta have all set up shop in the capital, often for years at a time. Georgia’s government estimates that in 2016 alone, the film industry gave the state a $7 billion economic boost through job creation and tourism.

Los Angeles has the beach. New York City is a concrete jungle. But Atlanta can be Everytown—even a fictional 1980s Indiana suburb. Stranger Things creators Matt and Ross Duffer originally wanted to set their eerie show on coastal Long Island in honor of Jaws but rewrote their script after visiting Georgia.

“We lost our beach and lighthouse, but we gained this American heartland aesthetic which now defines the show,” the brothers told TIME. “We needed suburban neighborhoods that look unchanged since the ’80s—Atlanta had them. We needed urban streets and skyscrapers for a Chicago set piece—Atlanta had those. We needed a quarry with a steep cliff—Atlanta had it, less than 10 miles from our soundstages.” They’re not the only creators who rewrote a script to fit the setting: Edgar Wright revised his 2017 hit, Baby Driver, to highlight Atlanta restaurant Bacchanalia, coffee shop Octane and famed music store Criminal Records.

A cluster of lighting stands on the set of comedy Little by Universal Pictures’ overlook the Atlanta skyline from the Terminus building.
RaMell Ross for TIME
Issa Rae looks over her script on the set of Universal Pictures’ Little. Marsai Martin is executive-producing with Will Packer, who has grossed some $500 million at the box office with other Georgia-based films like Ride Along, No Good Deed and Stomp the Yard.
RaMell Ross for TIME

It takes more than tax incentives to lure productions. “It’s not enough to just get us here,” says Walking Dead producer Tom Luse, a Georgia native who began his career as a production manager on the Georgia-based film Glory. “The mayor [of Senoia] and state are eager to help, allowing us to shut down bridges and streets and take over towns.”

Detractors say the jobs created by productions are low-paying and could disappear if another state offers a better deal. Some worry about the industry’s political influence: in 2016, Georgia Governor Nathan Deal vetoed a “religious liberty” bill that was opposed by Hollywood studios as well as other corporations. Still, the state has invested in the industry’s long-term growth. In 2015, it created the Georgia Film Academy, which offers training to aspiring crew members and funnels its graduates directly into local productions.

Studios are putting down roots. Pinewood, host to many Marvel films, has built a massive Georgia campus in Fayette County that includes 18 soundstages on 700 acres plus its own Home Depot. The 230-acre, 1,300–residence Pinewood Forest is set to open across the street beginning next year. It’s the sort of place that just might attract more superheroes.

RaMell Ross is an artist, filmmaker and writer based in RI and AL.

The original version of this story misidentified one subject of the primary image above. He is Brad Carter, not Ben Robson.