The Hollywood Escape Economy Is Just Around the Corner

Illustration by Nicolás Ortega for TIME
Ideas
By Janice Min
Min, a former co-president of the Hollywood Reporter–Billboard Media Group, is a contributing editor at TIME.

In the dark days after 9/11, dire pronouncements about our nation’s new cultural identity rained down like the acrid particles floating over lower Manhattan. It would be the end of irony. The end of comedy. Our sense of innocence, particularly for Gen X and millennials, who largely had known lives of peace and security, was gone. Hello fear. RIP fun.

Yet six months later, The Bachelor debuted on ABC. Shortly after came American Idol. Then Joe Millionaire, a preposterous real-life acid test to shame gold-digging women. (The show garnered 35 million viewers for its finale.) Cynicism didn’t end; it took steroids. Nowhere was that more manifest than in an obsession with celebrity that would come to define the decade. I was the young editor in chief of Us Weekly from 2002 to 2009 as that publication covered the frothy zeitgeist, as the soap-operatic lives of young stars who needed only one name—Britney! Lindsay! Jessica!—became American obsessions. At its peak, Us Weekly was read by 14 million young, educated people a week, and I often thought about why we lusted for that escape. If 9/11 taught us anything, it was to be suspicious, unsettled: danger lurks everywhere. An anxious public fled into alternate realities of no actual consequence. (The Hills, anyone?)

Hollywood shows like The Simple Life made it easy. Americans cultivated a metallic taste for zero-sum equations, a world of winners and losers in politics, foreign policy and, yes, entertainment. Loving to hate Heidi and Spencer (“Speidi”), it turned out, was a lot more fun than trashing Rumsfeld and Cheney. (“Chumsfeld,” anyone?) Should J. Lo and Ben get married? Ask CNN, whose anchors devoted whole segments to the couple. Our escapism was apolitical and banal. But the effect, in some ways, was not. The aughts may have been the last time wide swaths of Americans shared a communal language, chugging from the same watercooler. Soon, social media and algorithms would splinter us into a million pieces.

Today, the teens and 20-somethings who binged Gossip Girl and Survivor are in their 30s and 40s. Having matured in the shadow of one trauma, many will craft the aftermath of another (or multiple ones as the events of last week would indicate). The 1918 flu, the Depression, the world wars and 9/11 all resulted in entertainment booms. The difference today is that Hollywood is in chaos, some say decline. As production ground to a halt and advertisers fled in 2020, corporate overlords “right-sized” organizations to streaming-first orientations. The pandemic has resulted in hundreds of thousands of jobs lost; box office revenue is at a 40-year low. Content is now in the hands of streaming services, not the studios.

But Hollywood’s endemic woes haven’t altered people’s appetite for TV. Our televisions are today’s constant companion, bringing us Tiger King and eerie fan-free sporting events. Sure, we fantasize about post-vaccine trips we’ll take, parties we’ll attend. Yet the truth is, the bulk of our free time on the other side will be spent right where our lockdowns began—on a sofa in front of a screen.

But what will that entertainment look like this time around?

First, our escapist fantasies are different now. President-elect Biden talks about one America—not blue states and red states. In another era, this might sound corny. But conflict has depleted us. We used to cancel subscriptions and TV shows; now it’s people. No surprise, many of the new shows that resonated last year—Emily in Paris, Ted Lasso, The Queen’s Gambit—represented a new modern fantasy, where essential goodness is celebrated and rewarded. (Think anti-antiheroes to the previous decade’s Don Draper and Walter White.) Watching these shows last year delivered temporary inoculation against toxicity. Look for more of this kind of escapist programming—from high art to treacle, feeling good will be the new Breaking Bad.

Third, the A-list is endangered. Hollywood recently erupted in outrage when WarnerMedia CEO Jason Kilar announced he would be putting the studio’s biggest tentpoles concurrently in theaters and on its own HBO Max, breaking the tradition of “windowing”—where movies first get a theatrical run. Kilar is betting on two key truths: that technology almost always wins, as does the buyer holding the purse. The powerful talent agents at CAA and Endeavor have lashed out against the move—but the emotion is more fear than anger. The entire business model of stars whose eight-figure paychecks are funded by $100 million to $150 million productions (with theatrical back ends for top talent) is threatened. TikTok’s top creator, Charli D’Amelio, just scored a family reality series on Hulu. Open a different app and you have Oscar winner Nicole Kidman on HBO. As streamers make even more shows to compete, the star power of any one actor is naturally diluted, and TV paychecks for most are nowhere in the same stratosphere. Expect the same stars who preach equity on their social media to feel it firsthand as the notion of a top-down A-list continues to erode.

Fourth, plurality is the new mass. While the old ad model of cable and broadcast TV supported (mostly white) family-in-front-of-the-TV hits—76 million watched Seinfeld’s finale—Netflix, with infinite cloud data and ambitions, programs 24/7 to every demographic nook and cranny. A Black 30-year-old, an Asian teen and a white boomer all have equivalent market value because everyone is a prospect who might pay $17.99 a month, all without heed paid to the idea of “prime time” for an advertiser-selected demographic. Disparate audiences are identified and served via algorithm and then stitched together for scale. A global marketplace also has taken subtitles out of the art house, as Nordic crime dramas, Korean soap operas and Spanish bank heists enter our living rooms. Whatever your fancy, there is a show for that.

Illustration by Nicolás Ortega for TIME

Last, carpe diem time is coming. The French dubbed the decade after the 1918 flu the années folles—the crazy years. Radio, movies, parties, fashion, dance and jazz flourished. Now, a full century later, the quarterly UCLA Anderson Forecast expects a similar redux. “With a vaccine and the release of pent-up demand, the next few years will be roaring as the economy accelerates,” wrote Leo Feler, a senior economist with the forecast. Live entertainment and Broadway were already on the upswing pre-COVID, as people craved IRL experience amid onscreen culture. The adage “You can’t download an experience” will be especially apt as we emerge like restless horses in the gate from our almost Amish existence of baking bread and playing board games. Pre-COVID, live music was growing year over year, with $24 billion in ticket sales expected in 2022. Music festivals like Coachella already were the currency of Instagram and are only likely to come back bigger. In other words, expect the flex to keep going.

Entertainment is always a bellwether. Three years after 9/11, “The Apprentice” debuted on NBC. Donald Trump “fired” people within an organization that had filed for multiple bankruptcies. The show celebrated villains (Omarosa Manigault), contestants vowed to “destroy” one another and humiliation was the game. In season one, Trump declared, “Don’t give the disloyal a second chance.” Twelve years later, Trump was elected president. The sine qua non of an era.

What will be the Biden influence? The West Wing reflected an idealistic Clinton White House that maybe never was. 24 capitalized on George W. Bush-era anti-terrorism fears and government mistrust. Our president-elect, meanwhile comes from a clan that hugs and cries, and he love and respects his wife, even off camera. “Decent” is a descriptor both sides use to describe him. Could he be a Band-Aid that puts us back together? It’s possible the entertainment he might inspire will be another.

Upon writing this piece, I looked up the definition of entertainment in the Oxford dictionary: “the action of providing or being provided with amusement or enjoyment.”

Are you ready for it? Truthfully, it sounds pretty good. 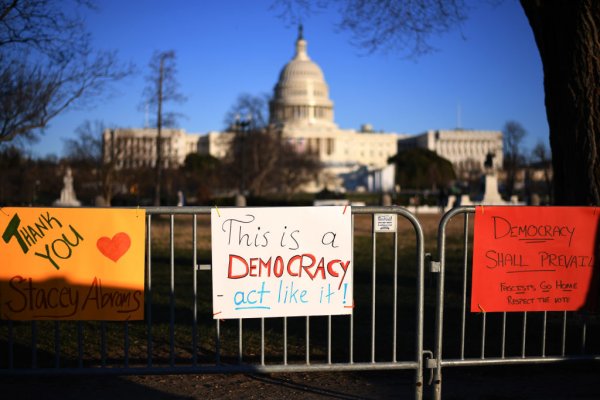 Save Sarcasm for Other Democracies. America Is Fine
Next Up: Editor's Pick