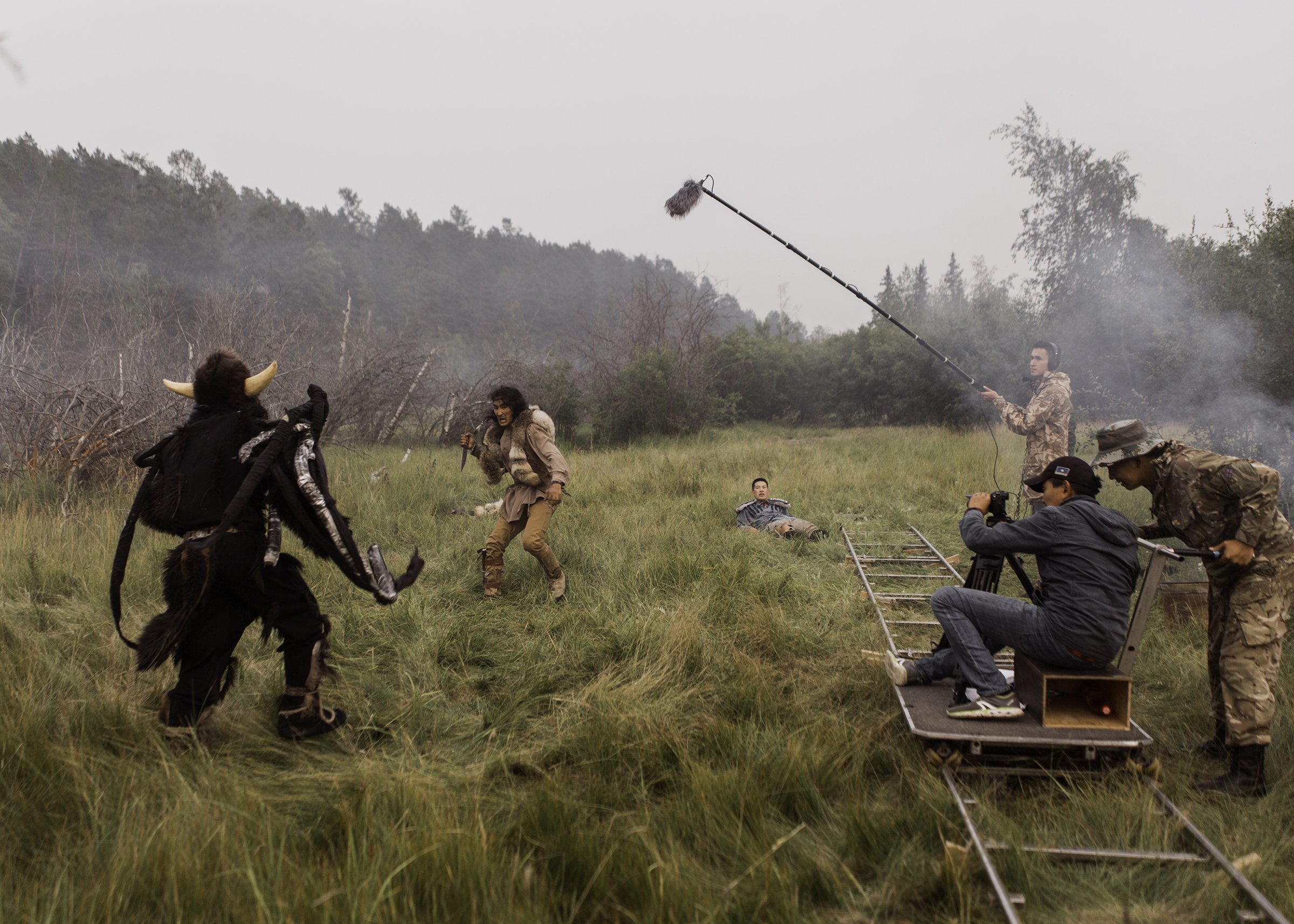 Shooting a scene for the fairy tale movie 'The Old Beyberikeen' in Yakutia, in August 2019.
Alexey Vasilyev

Why the Film Industry Is Thriving in the Russian Wilderness

By Suyin Haynes and Madeline Roache

Stepan Burnashev has loved cinema since he was a child. Growing up in Yakutia in eastern Siberia, then part of the Soviet Union, he would watch pirated Hollywood films on VHS tapes, from King Kong blockbusters to Bruce Lee action movies. When he was 8 years old, the fall of the Soviet Union opened up a new world of cinema to Yakutia, also known as the Sakha Republic. “I wondered why we didn’t make films in Yakutia,” Burnashev says. “I never dreamed I’d be a director back then.”

As Hollywood prepares for the 92nd Academy Awards Ceremony, in a remote northeastern corner of Russian wilderness, the movie industry is just beginning to boom. Burnashev, 37, is one of a growing number of directors emerging from Yakutia, some 5,000 miles and six time zones away from Moscow. The region, which makes up a fifth of Russia’s territory, is home to one million people and is known for its vast natural resources, including oil, diamonds and coal. With huge lakes, mountain ranges and arctic tundra, winter temperatures in Yakutia can drop to –60°C(–76°F), the coldest temperatures on record in the northern hemisphere.

Theater actor Vladimir Okhlopkov, who played the role of a police officer in the horror film 'The Cursed Land' directed by Stepan Burnashev, poses in a small movie theater in Yakutsk, Yakutia in June 2019.
Alexey Vasilyev
Paws from the costume of a mythical swamp creature called 'dulgancha.' All costumes for the film 'The Old Beyberikeen' were sewn by local designers, who made 30 costume pieces in total.
Alexey Vasilyev
Twins Semyon and Stepan starred in the fairy tale "The Old Beyberikeen,' playing the roles of mythical creatures living in the swamps. It was their first film.
Alexey Vasilyev
Isabella Nikolaeva, an actress with the Sakha Theater, in a dormitory during filming, in September 2019.
Alexey Vasilyev

While perhaps not the most obvious location for a blossoming independent film industry, filmmakers from the region are quietly gaining international recognition for their style of cinema. Affectionately nicknamed in the same vein as India’s Bollywood and Nigeria’s Nollywood, Yakutia’s “Sakhawood” is making itself known on the film circuit. Films by more than a dozen locals have screened to acclaim at international film festivals in Europe and Asia, despite the fact that the region’s capital city Yakutsk is a seven-hour flight away from Russia’s prestigious filmmaking schools in Moscow. Now, these directors dream of bringing stories from Yakutia to even bigger stages.

Yakutia has a rich history of folklore and legends, including tales of how gods shaped the region’s natural beauty. That influences the films and even the filmmaking process “I call on the gods for their blessing before filming, I ask them to feed the fire and the earth,” Burnashev says.

“Yakutia is an unusual place. Everything may seem surprising here,” agrees documentary photographer Alexey Vasilyev. “It seems strange how in this republic, far removed from the center of the world, cinema is developing rapidly.”

Cafe in the Lena movie theater in Yakutsk. With a population of just over 300 thousand people, there are 6 movie theaters there, showing Yakut films.
Alexey Vasilyev
A film set on the Lena River during the filming of 'Khara Khaar' (Black Snow) directed by Stepan Burnashev, in March 2019.
Alexey Vasilyev
Stepan Petrov, 74, became a celebrity not only in Yakutia but also in Russia after starring in 'The Lord Eagle' in 2018. He still plays in the local theater of his small village, Kerdem, where he lives with his wife.
Alexey Vasilyev
The theater stage in Nikoltsy village in Yakutia, in Aug. 2019. It is also used as a sports hall and cinema.
Alexey Vasilyev

Vasilyev has spent more than a year following the development of Sakhawood films, shooting behind the scenes on movie sets that span from horror to drama to comedy. “I was always interested in learning how to create a movie. It seemed amazing and complex at the same time seeing how, piece by piece, the directors realize their ideas on set,” says Vasilyev, who was born and raised in Yakutia.

Burnashev says Sakhawood films showcase Yakut people, cultures and ways of living in this harsh but mesmerizing environment. Films often derive their storylines from local legends and beliefs and are mostly shot in the Yakut language — spoken by the Sakha people — with subtitles provided for Russian-speaking audiences. “People don’t make films to make money,” says Burnashev. “They do it to produce interesting films that will say something.”

Burnashev studied economics and computer science at Yakutsk State University, and made a first short-lived foray into filmmaking in 2009. He only returned to it as a serious career in 2012, working with a dedicated crew. Since then he has launched his own production company, Saidam Baryl, which has produced nine films. His 2015 film Another Life told the story of a Yakutian immigrant living in New York, and in 2018 he made Respublika Z, an acclaimed zombie apocalypse thriller. “My films focus on relations between very different characters in extreme situations.”

In March, Vasilyev captured life on the set of Burnashev’s most recent film, Khara Khaar (Black Snow). Days on set can be long and punishing in the cold weather, and directors and producers have to balance artistic vision with the demands of keeping to a modest budget. Many of Sakhawood’s actors are novices with little or no on-screen experience. “I always try to choose actors without castings,” says Burnashev.”

Directors also tend to be self-taught. “These are not Hollywood stars who run for autographs,” says Vasilyev. “They don’t have a van where they will be brought hot food and coffee. In Yakutia, people eat pasta, stew, and instant noodles at the same table.” Yakut films usually have a production budget of somewhere $11,000 – $100,000, and don’t benefit from central state funding. For Respublika Z for example, director Burnashev had to borrow money and equipment to finance his budget of $39,000 and make the film. “After every project, I say I can’t get myself into more debt and I’ll only start a film when I have the budget. But everytime, I do it anyway and get in more debt,” Burnashev says. “I’m a fan of film and I really want Yakut cinema to take off. I want us to have decent budgets and films with worthy actors.”

But those sacrifices are now paying off. Sakhawood films received almost 80 awards between 2013 and 2018. The Yakutian film Toyon Kyyl (The Lord Eagle) took home the top prize at the 2018 Moscow International Film Festival, and film festivals in Finland and South Korea have hosted special screenings dedicated to Yakut films in recent years. And last year, Yakutia launched its own film award for achievements in cinema. Next month, Yakutsk will host its sixth annual International Film Festival, hosting members of the film industry from all over the world.

Actors playing the role of truckers in the drama "Khara Khaar" (Black Snow) rehearse their parts in the smoking room of a roadside cafe, where the scene takes place.
Alexey Vasilyev
On set at night for the fairy tale film 'The Old Beyberikeen.'
Alexey Vasilyev
A young couple Ivan and Inna watch TV at home in Yakutia. There are several Yakut TV channels with 24/7 broadcasting.
Alexey Vasilyev

“I like that Yakutia is like another world,” says Vasilyev. “Life for us is a certain degree of survival, but at the same time, under these conditions, we try not to forget about art, about the beautiful.” Despite the tough conditions and the minimal profits, many Yakut directors consider themselves lucky. They are a community of “sincere” fans of cinema, motivated by their desire to create an interesting film — “one that can feed a soul,” says Vasilyev. Burnashev dreams that one day his films will be seen at film festivals in Cannes, Venice and Berlin, and that directors from around the world will shoot in Yakutia. “I don’t think my film projects need to stay within the parameters of Yakut cinema,” says Burnashev. “I think it could go everywhere.”