When President Joe Biden stood in front of the iconic green marble and gold foil backdrop to address the United Nations General Assembly in New York on Sept. 21, he declared that the U.S. had ended 20 years of conflict in Afghanistan and opened a new era of “relentless diplomacy, of using the power of our development aid to invest in new ways of lifting people up around the world.”

That new era has gotten off to a rocky start.

Afghanistan desperately needs U.S. and international development aid. But providing aid to the country while the Taliban is in control raises concerns about how the money will be used and whether it will prop up a brutal regime the U.S. has long criticized and, until recently, fought against. The Biden Administration is moving forward with funding aid for Afghanistan, vowing to deliver $64 million in new aid to Afghanistan through the U.N. and aid organizations. But at the same time, it has frozen some $7 billion of Afghanistan’s central bank reserves held by the Federal Reserve Bank of New York until the Taliban shows it will abide by commitments to the U.S. government. And some Taliban leaders are designated global terrorists and subject to sanctions, like Afghanistan’s new interior minister in charge of police and security, Sirajuddin Haqqani, who is on the FBI’s most wanted list.

With few options since its haphazard withdrawal, the U.S. is caught wanting to provide humanitarian assistance to the nation’s citizens without supporting the Taliban, which Secretary of State Antony Blinken called the “de facto government” of Afghanistan before the House Foreign Affairs Committee on Sept. 13.

“It’s a dilemma because you do want to provide life-saving critical assistance,” says Aqil Shah, an expert on South Asia at the Carnegie Endowment for International Peace. But with the Taliban controlling the banking system and the levers of government, “How do you engage them without legitimizing them?”

The Biden Administration is hoping the spigot of assistance will save lives, and that the possibility of unlocking billions in the country’s foreign exchange reserves will give the U.S. leverage for influencing the Taliban to moderate its suppression of freedoms and treatment of women, and prevent terrorists from using Afghanistan to plot attacks against the U.S. The humanitarian assistance funds are intended to meet “critical health and nutrition needs” as well as “to address the protection concerns of women, children, and minorities; to help more children – including girls – go back to school,” Blinken said, speaking before the Senate Foreign Relations Committee on Sept. 14. To keep the funds for humanitarian assistance from being misused by the Taliban, the Biden Administration is sending them directly to independent organizations like the U.N. and international aid organizations working on the ground in Afghanistan with an emphasis on saving lives from hunger and continuing ongoing COVID-19 and polio vaccination campaigns. (The U.N. says it needs $606 million for the remainder of this year to help 11 million Afghans that need food, medical assistance, shelter and other needs.)

The Biden Administration is working to keep humanitarian assistance flowing to Afghanistan while denying major financial assets to the Taliban. “All U.S. funds are directed to closely vetted local and international partners on the ground with experience operating in complex environments such as Afghanistan,” says a senior Administration official. The Taliban is still sanctioned as a “specially designated global terrorist,” and 130 Taliban-related officials and entities are still subject to the U.N.’s 1988 sanctions regime. On Aug. 25, eleven days after Kabul fell into Taliban hands, the U.S. Treasury’s Office of Foreign Assets Control issued a specific license authorizing financial transactions needed to get direct food, shelter and health services to people in Afghanistan.

Previous administrations from both parties have taken similar steps to flow aid to address urgent humanitarian needs in countries subject to U.S. sanctions. The Trump Administration allowed humanitarian aid to enter Venezuela even as it imposed sanctions on the country, and Congress has ensured that there were humanitarian exceptions to sanctions on Syria, the official says. U.S. financial sanctions blocking billions of Afghanistan’s funds from falling under Taliban control are still in place. “As we maintain our commitment to the Afghan people, the international community has not reduced sanctions pressure on Taliban leaders or the significant restrictions on their access to the international financial system,” says a U.S. Treasury spokesperson.

But dangling the release of funds to convince the Taliban to act more responsibly is already creating political problems for Biden, and drawing skepticism from lawmakers of both parties. “Let’s quit sending good money after bad,” Sen. Rand Paul, a Kentucky Republican, said on Sept. 14, when Blinken appeared before the Senate. “Releasing money to the Taliban will add insult to injury.” The top Democrat on the Senate Foreign Relations Committee, Sen. Bob Menendez of New Jersey, said it is “somewhat absurd” to believe the Taliban will abide by U.S. and international community demands. “We know now that the Taliban had no intention of pursuing a political path,” Menendez said in the Sept. 14 hearing. “They had no intention of breaking ties with al-Qaeda, and it clearly had no intention of allowing women to have their rightful seat at the table and to participate fully in society.”

After just weeks in power, the Taliban has told boys and male teachers to go back to school but not girls and women. The country’s Women’s Affairs Ministry in Kabul, which had hosted a $100 million World Bank economic empowerment program for women, was closed and replaced with a ministry for the “propagation of virtue and the prevention of vice,” the same name of the office the Taliban government had used two decades ago to terrorize women who stepped outside narrow household roles.

Four days before Biden spoke in New York, the top United Nations official for global education programs arrived there to deliver a stark warning about the Taliban’s actions curtailing the education of girls in Afghanistan, a major thrust of the U.S.’s 20-year development efforts in Afghanistan. By not returning girls to school immediately, the Taliban was risking them being “left behind in education and ultimately, in life,” said Audrey Azoulay, the director-general of UNESCO.

The country is also in dire straits economically. Afghan banks are closed or severely limiting withdrawals, most government salaries have been cut off, and the U.S. has frozen $7 billion of Afghanistan’s cash reserves. The country is “on the brink of economic collapse,” according to the World Food Programme (WFP). With winter coming and local food supplies dwindling, two million children are at risk of malnutrition. A severe drought has killed 40% of the country’s wheat crop, and WFP surveys show that 93% of Afghan households are eating “insufficient” food. Money from countries like the U.S. may be necessary to avert disaster: Afghanistan is one of the world’s poorest countries, and international aid has made up half of its gross domestic product in recent years.

Hundreds of Afghans, guarded by Taliban militants, line up to withdraw money from banks that are slowly reopening after Taliban took control of the country, in Kabul on Sept. 5.
Marcus Yam—Los Angeles Times/Getty Images

That reliance on aid is why Biden and Blinken hope their assistance could influence how the Taliban governs. “Foreign aid, in theory, could be a big enough carrot to swing some behavior, but It kind of depends on what their alternatives are,” says Daniel Runde, an expert on foreign assistance at the Center for Strategic and International Studies and a former official at U.S. Agency for International Development. The Taliban has funded its fighting for decades with illicit opium trade, smuggling and black market mining operations, Runde says, but those criminal revenues aren’t enough to fund the country.

Even as the Biden Administration balances sending humanitarian assistance through organizations on the ground with applying financial pressure on the government, there are still risks to sending money into the country. “If you give money to these regimes, some of it is likely to find its way into the wrong hands,” says Shah. “So there’s no perfect solution to this.” 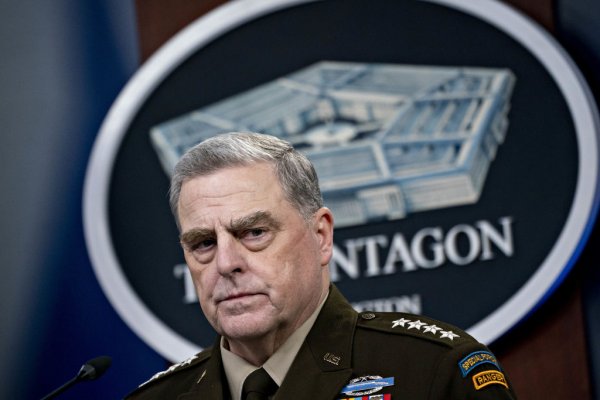 Biden Retains Confidence in Mark Milley Despite Trump Actions
Next Up: Editor's Pick