As someone who listens to a lot of podcasts as part of my job, I couldn’t help but admire how well Hulu’s mystery-comedy Only Murders in the Building captures true-crime podcast hysteria, ethical quandaries and all.

The show, which airs its Season 1 finale on Oct. 19, begins with three neighbors in a posh Manhattan building who bond over their mutual love of a Serial-like podcast. Charles (Steve Martin), Oliver (Martin Short) and Mabel (Selena Gomez) fancy themselves amateur sleuths. So when a man named Tim Kono (Julian Cihi) is found dead in their building, they take it upon themselves to solve the crime.

By now, these kinds of true-crime obsessives ought to be familiar. Rather than curling up with an Agatha Christie novel or streaming Knives Out, they consume real-life crime as entertainment. I’m not casting aspersions: I binged all of Serial too. But the true diehards see such shows as an opportunity to do some puzzle solving themselves.

If you followed that first season of Serial in 2014, you bore witness to the birth of the Reddit detective. Perhaps you even participated in drawing maps, recreating timelines and debating theories online, hoping you might crack the case. Just about every true-crime cultural phenomenon has spurred similar virtual, amateur investigations, though much of it has moved from Reddit to TikTok: In the last month, morbid theorizing about Gabby Petito’s death has taken the video platform by storm.

Only Murders in the Building isn’t the first TV show to poke fun at the true-crime genre and its fans. Netflix’s fantastic American Vandal centered on two teenagers bent on proving a fellow student was wrongly accused of drawing penises all over their high school. The show skewers documentaries like Making a Murderer whose creators have been accused of being motivated by self-righteousness as much as fact-finding. The podcast A Very Fatal Murder mocks the typical tropes of the genre, like a host ending an episode with an insanely long series of unanswerable questions: But where did the footprints lead? And whose were they? And did they even belong to a single man or perhaps a group of men who all wore the same size shoe? We may never know. Saturday Night Live has even parodied Serial.

But Only Murders in the Building is more a dramedy than it is a comedy. And to its credit, the show is deeply interested in the inner lives of its many side characters, from a jaded police detective to the deaf son of the podcast’s key advertiser. By treating its characters (and suspects) with such respect, the show seems more willing than its predecessors to wrestle with the thorny ethical conundrums of true-crime podcasting.

The trio at the center of the story admirably take on a case that the police ignore. But they do so in a messy manner—sometimes literally traipsing through crime scenes and destroying evidence. They help some people and hurt others, all while struggling with whether their work is exploitative or noble. Are they hunting down the killer for their own amusement or some greater good?

Here’s what the series gets so right about the true-crime podcast phenomenon.

Read More: Only Murders in the Building Is a Droll, Cozy Mystery for Modern Manhattan

The sound, acoustics and logistical considerations

Selena Gomez in Only Murders in the Building
Craig Blankenhorn—Hulu

True-crime podcasts tend to start with a sweeping statement about how an incredibly specific crime relates to all of human existence. This is a story about love. Or hate. Or how one small decision landed a falsely accused person in jail. Or set a murderer free. And how one small decision you, the listener, make today could change your life forever.

Only Murders begins with just such a monologue, courtesy of Steve Martin’s Charles, a washed-up actor best known for depicting a fictional TV detective decades ago. “Here’s a thing I don’t get,” he says in a voiceover. “People who worry about living in a big city because of all the crime. As any true-crime aficionado will tell you, it’s the Boondocks you need to worry about. I mean, let’s face it, nobody ever discovered 19 bodies buried in the backyard of a 14-story apartment building. There’s eyes on you all over the place here.”

We learn later that Charles and Oliver record such dialogue in a cramped closet for reasons relating to acoustics, a very true-to-life podcasting detail, particularly during the pandemic when so many hosts have started shows from their homes. The series gets other small tidbits right too, like Oliver constantly asking Charles to re-record his reactions to various revelations in the case with different intonations, and the trio finding slippery ways to get a subject’s consent to be recorded. Even the plinky music mimics that of Serial and its many moody imitators.

Only Murders In The Building
Craig Blankenhorn—Hulu

In the very first episode, Tina Fey shows up as Cinda Canning, a podcast phenom with a name that sounds suspiciously close to that of Serial host Sarah Koenig. Later in the season, Cinda sells her name and brand for a huge sum of money and lectures her acolytes in proper podcast intonation. Her assistants constantly remind Charles, Oliver and Mabel that Cinda won a Peabody (as did Serial).

As the trio’s podcast becomes more popular, they earn their own fandom, a group of misfits who sit outside their building and offer up theories, a real-life version of those Reddit diehards that first flooded the Serial subreddit.

Without giving away the show’s ending, it seems from a few hints through the first season’s run that the second season might follow Cinda as she creates a podcast about Charles, Oliver and Mabel’s podcast. An ultra-meta twist!

Nathan Lane in Only Murders in the Building
Craig Blankenhorn—Hulu

In order to finance the podcast, Oliver sets out to find a sponsor. He convinces another building resident, Teddy Dimas (Nathan Lane), to invest in the project without realizing that Dimas may have a vested interest in the outcome of the mystery. From then on, Charles has to pause his monologues about cat paw prints found in Tim Kono’s blood to plug Dimas’ business, Dimas’ Chicken Wraps.

As far as we know, no hit true-crime podcasts have been sponsored by suspects in a murder investigation. But cheery ads for a sandwich shop breaking up a grim mystery podcast echoes the tonally dissonant ads for MailChimp during Serial. (The ads became a running joke for Serial fans.) Years into the true-crime boom, the awkwardness of shilling underwear or at-home cooking kits shortly after descriptions of a gruesome home invasions still seems to be lost on companies like MeUndies and Blue Apron. (Or, more likely, these podcasts are so popular that the uncomfortable juxtaposition of underwear and murder is well worth it to the advertiser.)

Steve Martin, Amy Ryan and Selena Gomez in 'Only Murders in the Building'
Craig Blankenhorn/Hulu

The true strength of the show is elucidating the ethical complications of true-crime podcasting. Many a podcaster has been accused of over-sympathizing with whatever accused person they are trying to vindicate.

Only Murders exaggerates the connections between reporter and subject. The podcast creators live in the building where the murder took place, after all. They share the elevator with possible murderers. And multiple characters become romantically entangled with suspects. Still, by giving its protagonists personal investment in the case, Only Murders gently nods toward how difficult it is for a reporter to remain objective when embedded in a story.

In real life, podcasters sometimes overly romanticize their subjects: To make the listener care about the crime, the creators need to compel the listener to care about the victim. Only Murders challenges that practice, too: At one point, Mabel asks, what if Tim Kono was a jerk? That would be a problem for the show, argues Oliver. “Every great Episode Two always makes you care deeply for the victim,” says Oliver.

The prospect of turning a buck also complicates the creation of the trio’s podcast. Halfway through the show, Oliver has to decide between recording an episode that will please their first (and only) sponsor and recording one that tells the truth. Later, Oliver begins churning out merch for the podcast: tie-dye sweatshirts based on what one of the suspects, “Tie-Dye Guy,” was wearing the night of the murder.

True crime podcasts vary wildly in terms of their moral code. Some podcasters don’t even purport to be journalists, just entertainers who scroll through Wikipedia and recount grisly attacks while sipping on glasses of wine. Others endeavor to adhere to journalistic standards but lack the oversight of editors at a traditional publication or a podcast production company’s ethical guidelines. It can be difficult for listeners to tease out what is a well-made show, and what’s just a salacious one.

The real humans behind the story

Aaron Dominguez in Only Murders in the Building
Craig Blankenhorn—Hulu

The best true-crime podcasts sound like a novel or a movie script. They lay out a surprising series of events logically. They’re easy to follow and gripping. But to fit a real-life story into a digestible narrative inevitably means editing out parts of people’s lives and reducing a multi-dimensional human into simply “victim” or “killer.”

The problem is perfectly encapsulated in a fantastical scene in Only Murders in which Oliver, a onetime musical theater director, breaks down the suspects as if he’s casting one of his Broadway shows: “Congrats on making it this far. You should all feel very proud indeed, but as you know there can only be one ‘Tim Kono’s murderer.’ I’m looking for motive; I’m looking for means; but most of all, I’m looking for moxie.”

Selena Gomez, Steve Martin and Martin Short in 'Only Murders in the Building'
Craig Blankenhorn/Hulu

Perhaps the most essential element to any mystery story is the cliffhanger. To compel the listener to tune in the following week, each episode must end with a twist or a tease. In reality, eventually a case must be solved or else remain cold forever. Then the host must endeavor to find another subject in another location. Luckily for Only Murders, the show can manufacture as many murders as necessary in that same uptown building to keep the story going.

Since the show was recently renewed for a second season—and the very first episode of the first season already teased a second murder—it’s safe to expect that the residents of the Arconia building had better watch their backs. The show’s core trio, after all, only podcasts about murders within its walls. 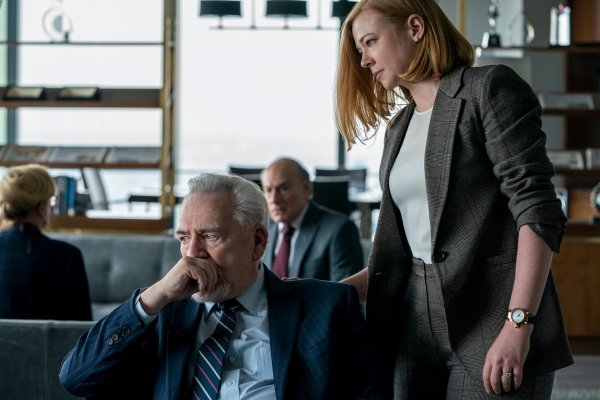 "Succession" According to Corporate Lawyers
Next Up: Editor's Pick