Donald Trump is out of office. That doesn’t mean he’s out of power.

In the last week, the former President has once again shown just how he plans to maintain control of the Republican Party’s brand. He has refused to accept the Republican-led audit of 2020 election results in Arizona that he is, in fact, still the race’s loser. He continues to push for election reviews in Georgia, Pennsylvania and Wisconsin—and seems to be on track to get them. Trump has been hammering his supporters in Congress to gum up a quartet of high-profile pieces of President Joe Biden’s agenda and keeps sprinkling his endorsements in races around the country, trying to exact revenge on corners of his party he has deemed insufficiently loyal.

Trump has remade the Republican brand into one of chaos and obstruction, despite holding no official place in the party hierarchy. His contempt for norms continues and, especially among House Republicans, that is in itself a new norm. It’s tough to imagine a pre-Trump moment where such rancor was celebrated. In 2009, when Rep. Joe Wilson shouted “You lie!” at then-President Barack Obama, he issued an apology almost immediately for his outburst. Now, Rep. Marjorie Taylor Greene’s heckling of fellow members on the steps of the Capitol about abortion and their faith is met with deafening silence from the GOP. (Party leaders, however, have already stripped her of committee assignments for peddling conspiracy theories.)

Trump may have fled Washington even before Joe Biden took the oath but his influence never left, especially among Republicans who sincerely believe that Trump’s mix of bravado and trouble-making is a winning cocktail for victory in next year’s midterms and the 2024 race that, if Trump is to be believed, could feature his return to the ballot. In fact, CNN polling shows GOP voters prefer Trump to be the leader of the Republican Party by a 2-to-1 margin, even if those same voters say it’s a coin-toss whether he’d actually help them retake the White House as the nominee. Trump is still drawing crowds across the country, and some $82 million in cash in the first half of the year moved into Trump-affiliated accounts at a network of political committees.

It’s easy to dismiss the shift in what it means to be a Republican these days as something that only matters inside the Beltway; something for cable news pundits to fret about. After all, the share of Americans who actually identifies as a member of the Republican Party hovers around 30% year over year. (Democrats come in around that same level. The biggest voting bloc in America is unaffiliated voters, and has been for decades.)

The problem is that for many voters, supporting Trump goes hand in hand with rejecting some of the nation’s basic guiding principles. In communities across this country, yard signs still are promoting Trump’s re-election last year. Many Republicans still believe he is the legitimately elected President of the United States: two-thirds of GOP voters said in a poll released last month that Trump was the winner of the election, a number that has remained consistent since November despite overwhelming evidence otherwise. It’s tough for rank-and-file Republican lawmakers to ignore that reality, even if meaningful election fraud is fiction.

Which brings us to this disturbing finding, released this week from the Pew Research Center. In a massive survey of more than 10,000 people, Pew found only 57% of Republicans believe those who heeded Trump’s advice to march on the Capitol and “fight like hell” on Jan. 6 deserve prosecution for the failed insurrection. That’s still a majority, sure, but it’s down from the 78% who said the same in March. And among Republicans who think the mob that stormed the Capitol and sent lawmakers into hiding deserve to face consequences, the intensity has dropped off, with the 50% of Republicans who in March said it was “very important” to prosecute the offenders falling to 27%.

In other words, Trump and his allies have been working tirelessly to normalize the Jan. 6 attacks and, at least among Republicans, it’s working. Their near-universal refusal to cooperate with Congress’ Jan. 6 investigation has delegitimized it, and the work more broadly to discredit a free and fair election continues to prove a threat to America’s democracy. To borrow an observation from a former Arizona Attorney General, an ex-Republican who was John McCain’s chief of staff, Trump’s efforts to undermine American democracy may be succeeding where Russia’s failed. And that’s something that all Americans across the political spectrum should watch with worry. 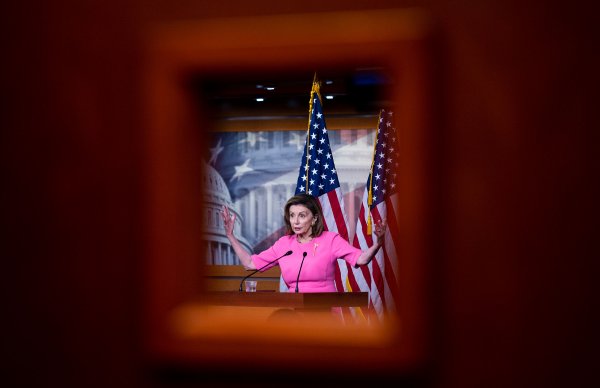 Democrats Head Toward Piecemeal Infrastructure Votes As Coalition Frays
Next Up: Editor's Pick