The Breach of the Capitol Spooked Us — As It Should Have

There was no doubt that the dark red smear left on the first-floor bust of Zachary Taylor was blood. Nor was there doubt that rioters had ransacked the second-floor office of the Senate parliamentarian, covering the blue carpeting by the fireplace with papers. And there was certainly no doubt by the end of the day, as lawmakers skittishly returned to work to find the typically pristine tiled floors caked with dirt from a day of chaos, that the U.S. Capitol had seen its most violent day in more than 200 years.

Rioters goaded by the soon-to-be-former President staged an insurrection at the Capitol yesterday, a development that would be called an attempted coup in other countries. The building, which sits on a hill in Washington as a fortress-like temple to American democracy, briefly fell to extremists who believe without evidence that Donald Trump won the election on Nov. 3. Bullies looking to overturn Trump’s loss posed for selfies in the space where, 20 years ago next month, I covered my first presidential address to a joint session of Congress.

The building became a playground for looting. They pocketed stationary from the office of House Speaker Nancy Pelosi and left behind threats on file folders placed on her keyboard: “We will not back down.” In the hallways, some members of the mob carried signs from offices, tech trophies and even a podium. Its barricades were breached for the first time since 1814, according to congressional historians.

It was a jarring day for anyone who has spent time at the orderly campus that sits at one end of the National Mall, with views from on high of the jewels of the Smithsonian museum system, monuments to Presidents and memorials for wars. The temporary scaffolding for President-elect Joe Biden’s inauguration was overtaken by the largely white crowd. Metal detectors proved mere speed bumps for rioters and the Capitol Police — typically stern and decisive — were unprepared. Protocols and disaster drills apparently hadn’t taken into account that tens of thousands of Americans would choose to storm the Capitol with such willingness to use force.

Relative to other government buildings in Washington, the Capitol is a fairly easy place to roam. With few exceptions, once you’re in, you’re in. The design of the so-called People’s House is meant to make it easy for the public to meet and petition their representatives, and is the most accessible building for reporters. That doesn’t mean it’s easy to navigate — the building’s labyrinth of tunnels and side passages can trip up even the most veteran visitor — but it does mean there was no easy way to stop the jacked-up throng once it got through.

Lawmakers and staff at first locked themselves in the House and Senate chambers, then fled. Some made it to more secure rooms in the vast network of office buildings, tunnels and the building’s private subway line. Others sheltered where they could. The unmarked offices sprinkled around the building where backroom deals are typically made became makeshift bunkers.

The rebels’ stated effort to overturn the will of millions of American voters failed, of course. Several hours later, lawmakers gathered in the building and certified Joe Biden’s win. But it was a shock for anyone who enjoys the echo of a dress shoe on the intricate tile patterns that date to 1856. Instead of budget footnotes, journalists were trying to find safety. Rather than listening to roll calls, staffers were hearing explosions and bullets. Members weren’t dialing for dollars. They were letting loved ones know they were fine for the moment.

Congress really is its own city, replete with a bank, barbershop, book stores, post office, even its magnificent library. But it’s also a place of protocol and tradition, where women cannot wear sleeveless dresses or open-toed shoes in some places. Camera crews cannot use tripods in most spots. When the articles of impeachment were conveyed from the House to the Senate in 2019, Capitol aides carefully helped journalists position themselves so they could make pictures of its delivery without breaking the protocol against photographing the double doors to the U.S. Senate. Yesterday, that space was traversed by a rioter carrying a Confederate flag.

No doubt, there will be an inquest into what went so wrong that a mob was able to march up the same steps where female lawmakers formed an honor guard as the late Supreme Court Justice Ruth Bader Ginsburg’s body left the building last year. Lawmakers will want to know how, even after overhauled security procedures were put in place after the terrorist attacks on Sept. 11, 2001, relatively low-tech thugs were able to breach the seat of the legislative branch.

On TV, the event unfolded like a bad action film plot. Movies about the fall of the White House, Air Force One or even the total decapitation of the U.S. government — sans a Designated Survivor — have been Hollywood fare for years. On the silver screen, the good guys always win in the end. Yesterday, there was no such guarantee. The only certainty was this: things at that grand building are going to change. 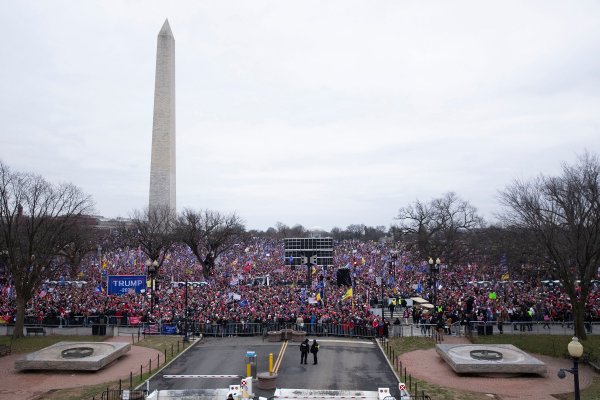 A Surreal Scene Unfolds in Washington as Donald Trump Tries to Undo the Election
Next Up: Editor's Pick