The Unmaking of the White Christian Worldview

Ideas
By Robert P. Jones
Robert P. Jones is the CEO and founder of PRRI and the author of White Too Long: The Legacy of White Supremacy in American Christianity, which won a 2021 American Book Award. He writes weekly at robertpjones.substack.com.

As I came of age in Woodville Heights Baptist Church, on the white working-class side of Jackson, Miss., I internalized a cycle of sin, confession and repentance as a daily part of my life. Though I wasn’t aware of it at the time, this was a double inheritance. Beneath this seemingly icy surface of guilt and culpability flowed a deeper current of innocence and entitlement. Individually, I was a sinner, but collectively, I was part of a special tribe. Whatever our humble social stations might be, we white Christians were God’s chosen instruments of spreading salvation and civilization to the world.

The power and sheer cultural dominance of white Christianity in America historically bound these contradictory sensibilities together. But today we are witnessing the unmaking of this white Christian worldview, and it has unleashed remarkably destructive forces into American life.

Understanding this dissolution is the key to deciphering one of the most vexing puzzles in our politics: how a purportedly sober Christian worldview has become a volatile cocktail of fealty to Donald Trump, wild-eyed rants about vaccines, faith in QAnon conspiracies and hysteria over critical race theory.

Read More: White American Christianity Needs to Be Honest About Its History of White Supremacy

Recent surveys by PRRI, an organization I lead, reveal disturbing realities among white evangelical Protestants today: 61% believe the 2020 presidential election was stolen from Donald Trump. And the idea of patriotism has taken a troubling turn: 68% believe Trump is a “true patriot,” and one in three believe that “because things have gotten so far off track, true American patriots may have to resort to violence in order to save our country.” More than seven in ten deny that the history of slavery and discrimination in the U.S. has any bearing on economic inequalities between white and Black Americans today. White evangelicals are the religious group most likely to refuse COVID-19 vaccines and object to mask mandates. One in four are QAnon conspiracy believers.

Understanding how we got here requires entering the white evangelical cultural world, one in which I grew up. As was common, my initiation rites started early. I accepted Jesus as my personal Lord and savior and was baptized at age 6. As I approached adolescence, I was encouraged to cultivate an identity as a disciple of Christ. I was taught to develop my own daily “quiet time,” about 30 minutes dedicated to scripture reading, journaling and prayer.

There were also communal rituals. During informal Sunday evening services, members often “gave their testimony.” Sometimes it was spontaneous, a member rising to break the prayerful silence. But the practice was also built into the liturgy (although we would never have used that suspect word, which belonged more to the Episcopalians on the other side of town). These scheduled talks were marked “Testimony” in the bifold church bulletin, with the name of the recruited witness indicated on the right margin.

Critically, what stitched these private and public practices together was an emphasis on personal sin. Common themes were failures in roles and priorities. The grown-ups promised to be more honest in their business dealings and to be more godly parents and spouses—husbands better leaders and wives more pliant to that leadership. When youth were invited to testify, we were often given guidance about how to be honest but appropriate—typically an expression of regret coupled with a promise to reform from running with the wrong crowd.

Read More: The Growing Anti-Democratic Threat of Christian Nationalism in the U.S.

But like a torch held too near the eyes in a dark room, these acts of intense discipleship illuminated little beyond our insular community. Nothing outside our intimate lives, not even (or particularly) major racial upheavals in our community, were perceptible objects of Christian concern.

When Black kids finally showed up in my third-grade classroom in the 1975-76 school year—a full two decades after Brown v. Board of Education—my white Sunday school teachers and pastor remained silent about this transformation of our daily social lives. When Ronald Reagan launched his 1980 presidential campaign with a speech emphasizing “states’ rights” in Neshoba County, where three civil rights workers had been murdered during Freedom Summer, Mississippi’s white Christians responded by consummating their marriage to the Republican Party, one that remains strong today. When Byron De La Beckwith was finally convicted in 1994 for the 1963 murder of civil rights leader Medgar Evers, there were no discussions in my Southern Baptist seminary about the silence and complicity of white Christian churches during those murderous days or since—even though De La Beckwith had been a member in good standing at a white Christian church and Evers’s last act had been organizing an unsuccessful campaign to integrate Jackson’s influential First Baptist Church.

Looking back on it now, it’s clear that this intense preoccupation with personal sin, by design, kept our field of vision shallow and allowed us to sit, Sunday after Sunday, “silent behind the anesthetizing security of stained-glass windows,” as Martin Luther King Jr. put it so devastatingly in “Letter from Birmingham Jail.”

Read More: I, Too, Was Once a Soldier of the Apocalypse: Why White Evangelicals Must Choose Between Reform and American Extremism

But now the bulwark of white Christian America is crumbling. We are no longer, demographically speaking, a white Christian nation. White evangelical Protestants—the once self-proclaimed “moral majority”—have fallen from nearly a quarter of Americans just over a decade ago to 14.5% of the public today. And Southern Baptists, who grew to be the largest Protestant denomination of all by the mid-20th century, have lost more than 2 million members across the same period.

As the shadow cast by white Christian churches and institutions is shortening, we’re witnessing in real time the anomie this contraction is producing among many of its adherents. Many are responding by abandoning the ranks. The increasingly desperate remainder are screaming defiantly from the ramparts, determined, to the last man, to defend the breached walls.

James Baldwin wrote, with anger and pity, about the Black experience of seeing white people as “the slightly mad victims of their own brainwashing.” He understood whites, and white Christians in particular, to be trapped in a kind of self-induced psychosis, stemming from the strain of sustaining a conception of themselves as repentant sinners while living lives of indifference and violence toward their fellow Black and brown citizens.

In these twilight years of white Christian America, for those still within the veil, the strain of holding these contradictions can lead to a dissociative state, where self-reflection becomes treasonous and self-delusion a necessity. The fruits of this spirit are abundant. Empathy signals weakness, and disdain strength. Prophets are shunned, and authoritarians embraced. Truth is exchanged for a lie.

We can puzzle over these phenomena separately, but they are best understood together as symptoms of collective ill health. The willingness of so many white Christians to embrace little lies everywhere stems from the necessity of protecting the big lie that is everything.

W.E.B. Du Bois wrote movingly about the double-consciousness that Black children have thrust upon them in America as their sense of self is distorted and refracted back at them through white eyes. He vividly described the struggle for the Black American “to merge his double self into a better and truer self.”

The problem today for white Americans, particularly we white Christians, is the opposite. Having grown up with the comforting illusion that sinfulness and innocence, humility and dominion can coexist in a single consciousness, it is increasingly evident that this amalgamation is a sign of deep moral, spiritual and political malaise. Rather than holding these warring selves together, we must banish one.

The first step toward recovery is to separate being white from being Christian. Practically, we must reject what have, for too long, been three articles of our faith: that the Bible is a blueprint for a white Christian America; that Jesus, the son of God, is a white savior; and that the church is a sanctuary of white innocence. Most fundamentally, we must confess that whatever the personal sins of white people, in the past and present, they pale in comparison to the systemic ways we have built and blessed a society that reflects a conviction that, to us and to God, our lives matter more.

The only path to health, for both our faith and our democracy, is for white Christians to embrace a terrifying but saving truth: what we have taken to be the bedrock of our faith and a biblical worldview—that we alone are God’s chosen people to bring salvation and civilization to the world—is not an eternal truth grounded in the Bible but rather a self-serving lie rooted in white supremacy. 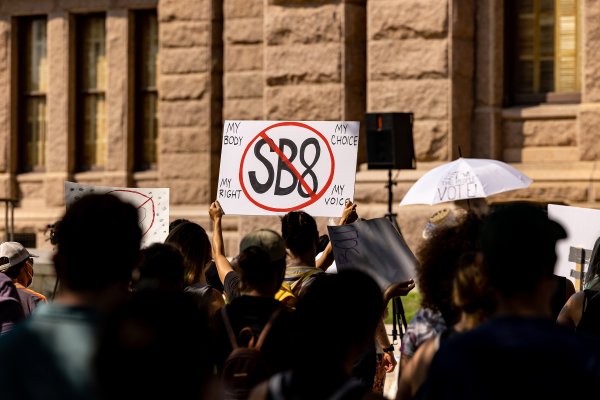 I Can't Do My Job as a Pastor With Abortion Laws Like Texas' S.B. 8 in Place
Next Up: Editor's Pick