How Can We Escape the COVID-19 Vaccine Culture Wars?

On Friday, March 19, my wife and I got in our cars to drive an hour south of our home in Franklin, Tennessee, a prosperous suburb of Nashville. The purpose of our trip was simple—to drive where it was easier and faster to schedule a COVID-19 vaccination. In Franklin it was hard. Demand was outstripping supply. Drive an hour south—to more rural Tennessee—and it was easy. Supply outstripped demand.

When we arrived we were pleasantly surprised to see that the site was at least a little bit busy. The room was social-distanced but reasonably full. The atmosphere was pleasant and maybe even a little festive. The day many of us had long prayed for had arrived. Operation Warp Speed had worked. The end of the pandemic was near.

Fast-forward to Monday, April 5. That was the day for our second shot. Again we got in our cars and drove south. We arrived at the same clinic, expecting to see the same sights. But except for my wife and me, the room was empty. Not a single other patient was there. When we talked to the nurse who gave us the shot, she told us that there had been “hundreds” of no-shows for their appointments. After an initial burst of enthusiasm, attendance was tailing off. The vaccine hesitancy polls predicted had arrived, and we were witnesses.

Nothing about this should be surprising. After all, the history of the pandemic is intertwined with the culture war, and from the beginning the response to COVID-19 has broadly split between blue and red, urban and rural, with virtually every important issue decided by your response to a single, vital question—how dangerous is COVID-19?

For all too many Americans, the answer to that question was almost entirely partisan, and the way they answered that partisan question dictated their response to the virus.

On January 22nd, Trump set the terms. He told CNBC that Coronavirus was “one person coming in from China. We have it under control. It’s going to be just fine.” No, Trump’s single statement didn’t launch the COVID culture war, but it was the first spark in a blaze of disinformation that over time constructed the partisan alignment that followed. Red Americans disproportionately resisted COVID restrictions, while Blue Americans largely embraced them.

Taking their cues from Trump, conservative media elevated COVID skeptics. More progressive outlets raised COVID alarms. The result was entirely predictable. In March a large-scale Gallup-Franklin Templeton survey found that Democrats tended to overestimate the risks of the virus and Republicans tended to underestimate its danger.

The rest is deadly, polarized history. The nation ultimately constructed two, competing Coronavirus political cultures. Travel to a blue city during the height of the pandemic, and the differences were clear. It was unthinkable to go maskless inside a retail establishment, and you would often endure glares and sharp comments even if you unmasked outside.

In a red town—especially a rural red area—the reverse was true. It was almost unthinkable to wear a mask outside, and in some deep red areas, even wearing masks inside was frowned upon. Pastors who tried to implement masking and social distancing guidelines would sometimes face fierce resistance, though it was well-established that crowded, close quarters in church could trigger superspreader events.

Each side erred in different ways, but anti-masking, COVID denialism directly and immediately contributes to the spread of the disease. In a very real way, right-wing COVID political correctness can cost lives. An unmasked person presented an excessive, unnecessary danger to the people around him.

And the evidence is overwhelming that vaccine hesitancy is just as partisan (if not more) than every other COVID fight since the pandemic began. While surveys show that vaccine acceptance is thankfully rising overall, they also show that Republicans are far more hesitant to take the vaccine than Democrats, and heavily-Republican white Evangelicals are more reluctant to take the vaccine than any other religious community.

If you don’t trust polling data, the real-world results now show that vaccine hesitancy is strongly concentrated in red states. According to the most recent data, when measuring states by percentage of adults who’d taken at least one dose of the vaccine, Joe Biden won 18 of the top 25. Trump won all but one of the bottom 17. Change the measurement to percentage of available doses administered, and Biden won 18 of the top 25 states in the nation.

There’s an argument that GOP vaccine hesitancy is odd. After all, Operation Warp Speed—the federal effort to expedite the development and delivery of the vaccine—was a Trump administration initiative. He should take pride in the fact that COVID vaccines were approved and ready for use before the end of 2020.

But that underestimates and misunderstands the nature and depth of the partisanship at issue. When Trump drew the line in the sand minimizing the virus in the first months of the pandemic, millions of his supporters drew that line right with him—and not as a self-consciously partisan pose but rather as a deeply-held belief and tribal identifier. Resistance to COVID restrictions became a marker of strength and independence, a sign that “they” cannot tell “us” how to live.

That’s one of the many reasons why it is so very difficult to fact-check a partisan out of vaccine rejection. Their skepticism about vaccines, along with their resistance to masks, and together with their opposition to lockdowns has become a part of who they are.

Yes, they will express other reasons for rejection (including fringe conspiracy theories about chips, overhyped fears about adverse reactions,or faith in divine protection), but these are largely the rationalizations that justify the existing conclusion, not the reasoning that results in a considered outcome.

This is not to say that medical arguments about vaccine safety are useless. But it’s important to separate the secondary from the primary. Partisan tribalism is the primary cause of Republican reluctance, and it’s the reason why white Evangelicals are disproportionately hesitant to take the vaccine.

As Curtis Chang, a seminary professor and co-founder of Christians and the Vaccine, a group that engages with vaccine-hesitant Evangelicals, told me, “Once Trump set the Republican culture down this path, he made it very difficult for Evangelical leadership to lead.” In fact, there’s evidence of a wide gap between Christian leaders and their congregations. According to a National Association of Evangelicals survey, 95 percent of Evangelical leaders said they’d take the vaccine when it’s available—a percentage more than 40 points higher than white Evangelicals overall.

Thus, so long as vaccine hesitancy remains a partisan issue, religious arguments about the moral necessity of taking the vaccine—for example, to care for our neighbors by making sure we don’t spread the disease—are likely to be ineffective.

Yet it’s presently almost impossible to depolarize the nation. We’re deeply divided and increasingly live apart. As the Wall Street Journal has vividly illustrated, from 1980 until 2020, the number of “landslide counties” (counties where the presidential vote was “20 points more partisan than the national overall”) went from 391 out of slightly more than 3,100 overall to an incredible 1,726—a clear majority.

But can we depoliticize an issue? That’s the key question. At the moment, the signs aren’t promising. In a recent CNN survey, all 219 Democratic House members reported that they were vaccinated. Only 95 out of 212 House Republicans said the same. While the Senate was much better (46 out of 50 GOP Senators said they were vaccinated), the House is much closer to the GOP grassroots. And many Republicans blame overhyped fears of the virus for Trump’s loss.

One thing is certain, however. America will move on to new fights. And while the vaccination rate is slowing, almost 1 million Americans a day are still getting the shot. As our nation continues to open, we can hope that tempers will cool, tensions will ease, and a person’s positions on the virus will become less salient to their partisan identity.

That’s when we can drive south and it’s not different. We’ll reach just another American community like any other, a place that embraces this vaccine like it embraces every vaccine—in part because the politics will have finally taken a back seat to prudence.

Until then, however, to paraphrase The Who, “Meet the new fight, same as the old fight.” From lockdowns to masks to schools to shots, all too many of us are still living in the political culture created by Donald Trump, the man who faced the great challenge of his presidency and responded by trying to lie his way to health, prosperity, and that elusive second term. 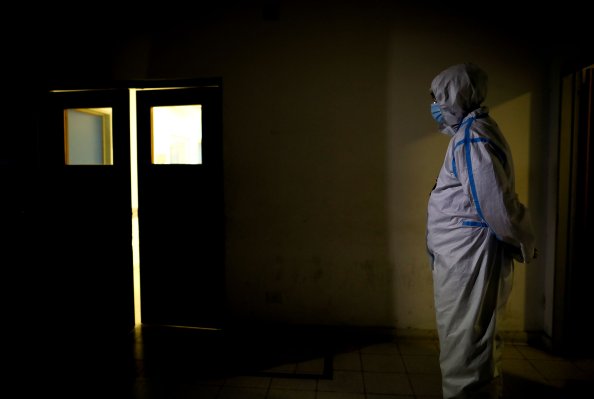 Vaccinate the World's Health Care Workers
Next Up: Editor's Pick