The Growing Anti-Democratic Threat of Christian Nationalism in the U.S.

On January 6th, 2021, insurrectionists stormed the U.S. Capitol in order to “Stop the Steal” and delay the certification of President-elect Biden’s electoral college victory. Christian flags, crosses on t-shirts, “Jesus Saves” signs, and prayers for victory in Jesus’ name were now-famously conspicuous among the mob.

By early April, the Brennan Center for Justice reported that lawmakers in 47 states proposed over 350 bills that claim to address voter fraud by limiting mail, early in-person, and Election Day voting through stricter ID requirements, limiting eligibility to vote absentee, or fewer voting hours. The recent bills signed into law by Governors Brian Kemp in Georgia and Ron DeSantis in Florida are just two examples. A similar bill is currently making its way through the Texas State Legislature.

For all their rhetoric of ensuring “fair elections” and claims of “proven voter fraud,” one might believe that these Americans, the insurrectionists and lawmakers and the millions who support their efforts, are driven by an abiding passion for democracy.

But that’s not what the data tell us. Or history.

In order to understand what led to the deadly Capitol insurrection and the spate of proposed voting laws we must account for the influence of Christian nationalism, a political theology that fuses American identity with an ultra-conservative strain of Christianity. But this Christianity is something more than the orthodox Christianity of ancient creeds; it is more of an ethnic Christian-ism. In its most extreme form it legitimizes the type of violence we saw on Jan. 6 and the recent flood of voting restrictions. Violence and legislation not in service of democracy, but instead for fundamentally anti-democratic goals.

In our book, Taking America Back for God: Christian Nationalism in the United States, we use several large, national surveys of Americans collected over the last decade to show that about 20 percent of Americans―those we call “Ambassadors”―strongly embrace Christian nationalism.

As a political theology that co-opts Christian narratives and symbolism, Christian nationalism has its own version of the “elect,” those chosen by God. They are “people like us,” meaning conservative Christian, but also white, natural-born citizens. Moreover, in a prosperous nation, only “the elect” should control the political process while others must be closely scrutinized, discouraged, or even denied access. This ideology is fundamentally a threat to a pluralistic, democratic society.

Though its modern-day proponents might not be so explicit to speak in terms of “the elect” or chosen citizens, throughout our nation’s history and even before, Christian nationalism has sought privilege for and ascribed moral worth to an “us” (white, natural-born, cultural conservatives) over and against a “them” (everyone else). It baptizes a quest for power and privilege in the public sphere predicated on ensuring only certain Americans feel welcome to fully participate in civic life. This includes voting, the cornerstone of any functioning democracy.

While a very small minority of these Americans might ever end up at an insurrection or be in the position to systematically limit fellow citizens’ access to the vote, our research shows that the anti-democratic impulse that motivated the insurrectionists—and their willingness to resort to violence—and recent lawmakers is pervasive to Christian nationalism.

In national data collected just before the 2020 election, we asked Americans about their views on voter access, supposed voter fraud, and voter disenfranchisement. The strength of the link between Christian nationalism and anti-democratic attitudes is stunning.

The 20 percent of white Americans who strongly embrace Christian nationalism—about 30 million adults—are more likely to believe that we make it “too easy to vote” in the U.S. They also support hypothetical policies that exclude those who could not pass a basic civics test from voting or policies that disenfranchise certain criminal offenders for the rest of their lives. These white Americans we call “Ambassadors” of Christian nationalism are also much more likely to believe that “voter fraud is getting rampant” and deny “voter suppression” (historically targeted against minority communities) is a problem at all.

They are also less likely to feel we need to “address gerrymandering in order to ensure fairer congressional elections” and are tremendous fans of the Electoral College system. Research shows the Electoral College gives a disproportionate weight to whites’ votes above others and preserves a fighting chance for GOP Presidential candidates.

These ideas were powerful even before the November 2020 election. The election aftermath where Trump and his supporters continuously pushed false charges of election fraud only served to reinforce and activate them. It is no surprise, then, that so many Americans who embrace Christian nationalism and support Trump were ready to believe any narrative of a stolen election.

Read More: The Secret Bipartisan Campaign That Saved the 2020 Election

The relationship between Christian nationalism and anti-democratic attitudes has a long history in this country. Limiting access to voting and employing violence in order to disrupt the democratic process are not aberrations. After the Civil War and throughout the years of Jim Crow, Christian leaders routinely provided the theological arguments needed to rationalize limiting Black Americans’ access to participation in the democratic process. They explicitly tied these efforts to their desire to protect the purity of a “Christian” nation.

Consider the most infamous articulation of Christian nationalism’s anti-democratic goals from Paul Weyrich, co-founder of the Moral Majority. In an oft-repeated 1980 speech to a group of evangelical leaders, Weyrich explained:

“Now many of our Christians have what I call the goo-goo syndrome―good government. They want everybody to vote. I don’t want everybody to vote. Elections are not won by a majority of people, they never have been from the beginning of our country and they are not now. As a matter of fact, our leverage in the elections quite candidly goes up as the voting populace goes down.”

Even then Weyrich was aware that a democracy with free and open elections threatened the likelihood of white, culturally conservative Christians maintaining privileged access to the levers of power. The takeaway was obvious: make it more difficult for the political opposition―non-conservatives, but implicitly racial and ethnic minorities―to vote.

Weyrich took his own advice. He and others worked to create organizations intent on bringing Christian nationalism’s anti-democratic impulses into reality. The American Legislative Exchange Council (ALEC)—also co-founded by Weyrich in 1973—is one example. To this day ALEC supports restrictive voter policies that disproportionately affect people of color: strict voter ID laws, automated purging of registration lists, limiting mail-in or early voting, or slashing the number of polling places.

So if the voting restrictions put into place by the lawmakers in Georgia, Florida, and Texas sound familiar, they should. History might not repeat itself but it certainly does rhyme.

The threat of Christian nationalism is buried within the seemingly harmless language of “heritage,” “culture,” and “values.” But within this language is an implicit understanding of civic belonging and relative worth. Study after study shows Christian nationalism is strongly associated with attitudes concerning proper social hierarchies by religion, race, and nativity. These views naturally extend to whom Americans think should have the right to participate in the political process and whether everyone should have equal access to voting.

Pair this hierarchical thinking with the propensity of Americans who embrace Christian nationalism to believe in conspiracy theories, trust Donald Trump above all other sources of information, and baptize violence in the name of protecting the United States. Doing so illuminates why so many would support a violent insurrection in the name of Jesus or pass laws aimed at limiting minorities’ access to the democratic process in opposition to the results of a fair and free election.

White Christian nationalists see the nation as their own both historically and theologically and so any Presidential election that does not produce the desired result must be illegitimate. True patriots, in this understanding, have the right―the duty, even―to take it back, by force if necessary.

Viewing the problematic history of limiting who can vote in the United States alongside our recent findings underscore the clear and present danger Christian nationalism poses to democracy. Efforts to neutralize the political threat of minority groups by subverting their ability to vote strikes at the very heart of the idea of fair and free elections.

This threat will not disappear, no matter which party controls the three branches of the federal government. Christian nationalism will not fade into obscurity any time soon. It has survived over decades and permeates much of our civic life and culture. The violent, anti-democratic impulses of Christian nationalism still course through the veins of our body politic, waiting for the next opportunistic strongman willing to put them to use.

Just as the January 6th insurrection and recent voting laws are not aberrations but a reflection of similar events in our nation’s history, they too may be a bellwether of events to come if we do not acknowledge and confront Christian nationalism. Our democracy is at stake. 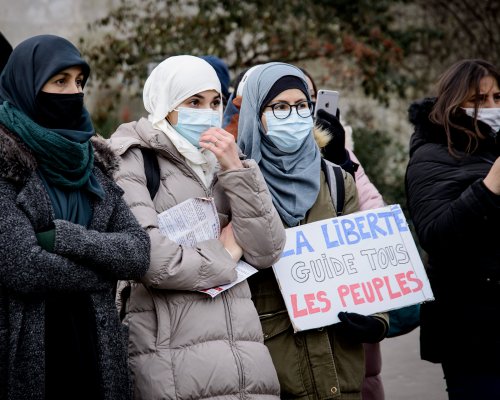 Where France's Possible New Hijab Ban Fits Into History
Next Up: Editor's Pick