There are some actors so intense, their nerve endings sizzling so close to the surface, that they can make you want to look away. That’s Jake Gyllenhaal, as a disgraced Los Angeles police detective demoted to 911 dispatcher, in Antoine Fuqua’s stripped-down cop drama The Guilty. The film is opening in select theaters and will be available on Netflix on Oct. 1 as well, though Gyllenhaal’s performance is a test of what we look for in, and take away from, those two modes of watching. Viewing at home, you can take a break if the intensity of Gyllenhaal’s performance becomes too much. But the big-screen effect would surely be different: you may want to look away from Gyllenhaal, a jittery hypnotist, but it’s doubtful you’ll be able.

On the eve of his trial for a crime whose nature is only hinted at (though we can guess), Gyllenhaal’s Joe Baylor receives an emergency call that sets off every sensor. The woman on the line, her voice vibrating with nervous tears, acts as if she’s speaking to her child, but Baylor knows how to read her code. He deduces that she’s been abducted, and he pulls every lever in the system to locate and save her, though raging wildfires in the area have left all local branches of law enforcement understaffed. Somehow, the woman’s plight mingles with Baylor’s own personal problems, complicating her rescue.

Jake Gyllenhaal as Joe Baylor in 'The Guilty'
Courtesy of Netflix

This picture, a remake of Gustav Möller’s 2018 Danish film of the same name, isn’t strictly a one-man show: it’s Riley Keough’s voice we hear as the abducted caller. Baylor’s exasperated boss is played by Christina Vidal—she corrects him repeatedly and wearily, a suggestion that his snappish anxiety has alienated everyone around him.

But it’s Gyllenhaal who owns the screen. He has worked with Fuqua before—they made the brutalist boxing drama Southpaw together—though this time, thanks to COVID-related complications, Fuqua directed the movie from a van, maintaining contact with cast and crew from a distance. What must it have been like to capture the serrated intimacy of this performance at that remove? Gyllenhaal’s Baylor is a man on the edge of time, reckoning with a deed he can’t take back and a possible future built on lies. Few actors can put this kind of raw yet strangely companionable self-loathing onscreen—and make you glad you didn’t avert your eyes, no matter how much you wanted to. 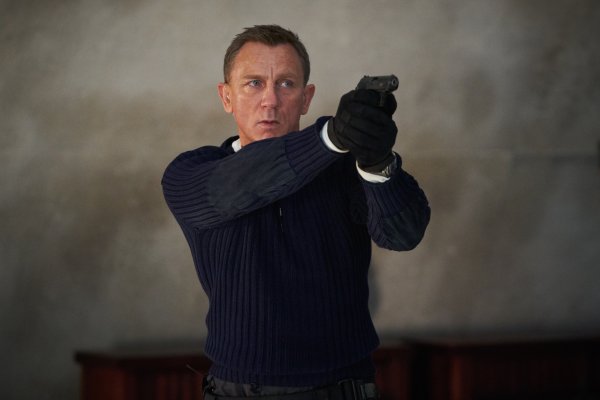 No Time to Die Is an Imperfect Movie. But It’s a Perfect Finale for the Best James Bond Ever
Next Up: Editor's Pick