When George W. Bush Called Out the Jan. 6 Rioters, We Listened

SHANKSVILLE, Pa. — It was just one page in his remarks. But on that sheet, read with the tone of a disappointed grandfather, former President George W. Bush made his message as clear as he could: the threats to America’s democracy can just as easily foment in the homeland as from abroad.

“There is little cultural overlap between violent extremists abroad and violent extremists at home,” Bush said, his weight shifting to his left foot behind a formal podium planted in a field of wildflowers and death. “But in their disdain for pluralism, in their disregard for human life, in their determination to defile national symbols, they are children of the same foul spirit. And it is our continuing duty to confront them.”

It was a point that only Bush could make, a figure whose moral authority more Americans respect now than when his own presidency came to a close. It’s impossible not to link Bush’s contempt for the terrorists who 20 years earlier changed the world by hijacking four planes and turning them into missiles and his scorn for the brand of politics unleashed in the era of former President Donald Trump. One group, backed by Osama bin Laden, sought to destroy America by annihilating symbols of its economic, military and political might. The other, egged on by Trump, sought to set aside the results of the 2020 election and beat Congress into giving Trump another term.

The forty-third President’s words, delivered on the 20th anniversary of the Sept. 11 terrorist attacks and at the site of Flight 93’s crash that killed all 40 passengers and four hijackers, landed like a punch to the gut on an already emotional day. That one member of the informal fraternity—and, yes, it is still an Only Boys Allowed clubhouse—known as the Presidents Club would openly challenge another says plenty about the contempt that elite group has toward its newest member.

It took Trump to make America miss Bush, who posted a dismal 24% job approval in December of 2008 as his team was boxing up the West Wing to make room for the incoming Obama Administration. Bush left the public arena as the country was struggling to dig out of the Wall Street meltdown, to confront two ongoing wars and to manage a general sense of government incompetence that never really faded after the botched response to Hurricane Katrina. Two-thirds of Americans told Pew that Bush would be remembered more for his failures than his accomplishments. The number of Americans who had a favorable view of the federal government plummeted on his watch.

So, after retreating from Washington to his ranch in Texas and mansion near Dallas, Bush quietly went away. He wrote his surprisingly candid—at least for the genre—memoirs. He took up painting. He struck up a friendship with Michelle Obama. He told Jay Leno in 2013 that eight years in the spotlight was enough for him. “I don’t think it’s good for the country to have a former President criticize his successor,” Bush said.

Bush was not, however, ignorant of politics. To deploy an inside joke in Bush World, he engaged in ”strategery” where it might prove helpful, making a campaign stop in South Carolina for his brother’s failed shot at becoming the third Bush to be President. In the lead-up to Trump’s nomination, Bush told aides that he was concerned for the party. “I’m worried that I will be the last Republican president,” he said. The remark provided a title for one historian’s estimation of the remarkable Bush dynasty and the future of the GOP. He pointedly voted for neither candidate in 2016. And, when it came time to vote four years later, Bush famously said he wrote-in the name of his former Secretary of State, Condoleezza Rice.

His standing among Republicans is more complicated. That same CNN polling found one-in-four self-described conservatives and one-in-five self-described Republicans carried an unfavorable view of Bush. The last Republican convention he attended was his own re-election, way back in 2004. His spending and military interventions sparked billionaires Charles and David Koch to rally their pals to move from free-market advocacy into direct politics. And lest you believe the Bush dynasty remains the first family of the GOP, remember that Jeb Bush bowed out of the presidential race in South Carolina and George P. Bush, W’s nephew, failed to win the shadow primary for Trump’s support in the Texas Attorney General race next year. George W. Bush may look better than the last President for a lot of Americans, but he’s equally reviled by the Trump Forever crowd. In CNN’s polling, a quarter of Trump supporters say they carry an unfavorable view of Bush.

His father, another President the public came to dislike, followed a similar path of quiet reputational recovery. Bush 41 was parked at a job approval number of 34% on the Election Day that rendered him a one-termer. The elder Bush did not speak at the 2000 Republican convention nominating his son for the White House. He tried to shed the spotlight, even declining to publish a memoir in his post-White House years. But, on days that shook the foundation of the country he served, the elder Bush would speak out, as he did in a joint statement with his son to condemn the anti-Semitism on diplay during a 2017 march in Charlottesville, Va.

The Bushes’ approach is a stark contrast to most former White House residents. Jimmy Carter used his time after the White House to build homes, practice his own brand of diplomacy and support the programs of the Carter Center. Ronald Reagan remained active in Republican Party politics, but with his former Vice President George H.W. Bush in the White House, he largely kept his activism narrow. (He would announce in 1994 an Alzheimer’s diagnosis and retreat from public life.) Bill Clinton, whose legacy had its own reputational challenge after his impeachment, seems to have never slowed down in his post-White House years, working on his family’s foundation around the globe to solve problems with deep-pocketed pals’ cash. And Barack Obama has been traveling the globe with direct political work and working as an active critic of the Trump era. He even inked a lucrative publishing deal with Random House, started a production company with Netflix and hosts a podcast with Bruce Springsteen.

George W. Bush will never win back everyone. For some, the memories of the Florida recount will forever render him an illegitimate usurper. For some, he will forever be a war criminal who took the nation to war under false pretenses. For others, he’s forever going to be the vacationing elitist who at first planned to clear brush on his Texas ranch rather than pay attention to the devastation and death brought by Hurricane Katrina. These are not wounds easily mended by an endearing and meme-worthy fight with a poncho at Trump’s inauguration or passed candies to Michelle Obama at funerals.

But, at 75, Bush seems content to allow history to render its verdict. He is still involved in projects to help veterans and his library in Dallas is a hub for conservative scholarship. But for the most part, Bush is happy to stay out of the fray—unless he sees an opportunity to make a difference, like he did on Saturday in Pennsylvania when he called out members of his own party for their undemocratic impulses.

That Bush picked his moment so carefully is worth noting. The passengers aboard Flight 93 are widely credited with sparing the U.S. Capitol the same fate as the World Trade Center and Pentagon. The hijackers’ extremism failed because ordinary Americans stood together and stopped them. The same cannot be said about the insurrectionists who attacked the same building on Jan. 6. Those extremists breached the Capitol and did lasting damage, both physically and symbolically. The al-Qaeda thugs failed and retreated. The MAGA crowd briefly succeeded and are showing no signs of retreat. Bush knew his warning would get attention. And it deserves every ounce of it. 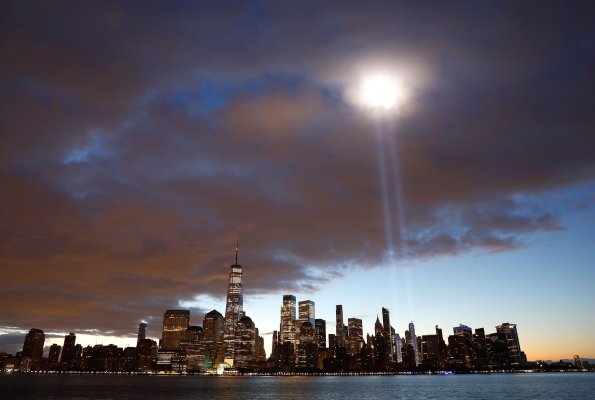 Twenty Years of Data Show How America Changed — And Stayed the Same — After 9/11
Next Up: Editor's Pick