Since leaving the White House, George W. Bush has written a memoir of his years in office and a book about his father. His third postpresidential book, out this month, is a departure from anything anyone named Bush — or any other President — has published after leaving office: Portraits of Courage, 192 pages of oil paintings of soldiers, Marines, sailors and airmen who were wounded while serving in wars launched during Bush’s presidency. Accompanying the portraits are stories, also written by Bush, about how each subject dealt with setback and then mounted a recovery. The paths are anything but straightforward, and Bush’s book, in words and pictures, is a challenge and a road map for anyone who faces difficulty. Bush answered some questions about his new avocation:

So, painting — where did this come from?

As a child and a President, I really wasn’t all that interested in art. You might say I was art-agnostic, to Laura’s lament. After the presidency, I started to get antsy. I needed another project. I happened to get a recommendation to read Winston Churchill’s Painting as a Pastime, and that piqued my interest.

Why do so many former leaders — Ike, Carter, Churchill — paint? Is it calming or diverting in some way?

Well, for me, it’s an opportunity to continue learning. The quest for knowledge doesn’t abate with age. One thing about the presidency is you stay really busy. Afterward, I needed more to do.

How often do you paint? Where and when?

I paint nearly every day. I have a studio upstairs in our house in Dallas, a studio at the ranch, and I also have some space to paint in Kennebunkport, Maine.

Is there a portrait in the book that was particularly easy or difficult?

The paintings in Portraits of Courage that were on big canvases were harder to paint than those closely cropped portraits of faces. All the paintings, however, were challenging. I wanted to do justice with my limited talent to my subjects–remarkable people who sacrificed for our country.

Is there one part of a portrait that’s the most difficult to paint?

The eyes are the most important, I think. On a lot of the faces, I had to work really hard to make sure I captured the right expression in the eyes.

Is there a modern painter you study?

There are quite a few. Lucian Freud, although our subjects vary a little bit. Wayne Thiebaud. I’m constantly studying some of the masters, and I’ve been able to learn a lot by looking at the past. I like Monet. And Laura, ever the librarian, has a lot of great art books I study. [Joaquín] Sorolla, the old Spanish painter, is someone I’ve paid close attention to.

How did you choose these subjects?

I had painted world leaders with whom I’d served, and my instructor Sedrick Huckaby said, “You know, you ought to paint the portraits of people you know well but who others don’t.” It instantly hit me that I ought to paint these wounded warriors I’d gotten to know. Most of them I had played golf with or ridden mountain bikes with through the events we host for them at the Bush Center. I’d gotten to know some better than others, of course, but I was equally moved by their stories.

What do you hope people take away when they see these paintings?

I hope civilians realize there’s not an ounce of self-pity in these veterans, and I hope that inspires our citizens to overcome their own struggles, whatever they may be. I hope veterans realize that it’s courageous to talk about their injuries, including invisible wounds of war like posttraumatic stress.

How important is public funding for the arts?

I’m just a sensitive artist these days, not a government official, but I would say that education of the arts is really important. The good news is, even if you don’t care about or learn about art at a young age, I’m proof that you can still take it up at age 70.

What’s next for you in art?

Thus far the evolution has been natural. I’m not going to force it. Secondly, I’m going to stick with oil. I tried acrylics, but I like oils better. I haven’t decided on a new subject yet. My tendency has been to select a subject and then paint a whole series–this being a prime example. 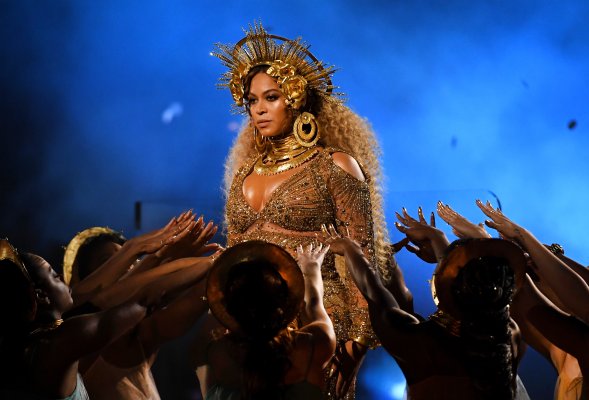 Beyoncé's Iconic Pregnancy Photo Is Now a Giant Mural
Next Up: Editor's Pick